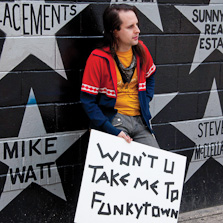 The 612 by Rogues Gallery Arts

(Disclosure: I am currently in a show with one of the four writers.)

The 612 is a reference to the area code, and as such is composed of three short plays (with a fourth framing and weaving in between the others) about Minneapolis. All four are entertaining, and none of them is unpleasant to sit through. All four also do a nice job of sidestepping the easy, tired jokes about Minnesota (there is a reference to hot-dish, but it’s ironic).

The strongest of these was a short scene, taking place during a series of labor strikes — a brief moment of three disparate characters making contact with each other under violent, frightening circumstances. It manages to be touching while avoiding sentimentality, and does it so effortlessly that I think it’s easy to overlook how complex the scene is — I find one character’s act of brutal savagery at the beginning to be totally credible, and his later acts of reluctant sympathy to be equally credible, and that’s kind of remarkable.

The weakest scene was the most abstract, almost absurdist. Actually, I found the writing to be quite lovely, a pair of characters communicating in a series of recurring, lyrical fragments. The performers seemed competent, but I think that they (or the director) made a poor decision — to perform the piece in a kind of cutesy, cartoonish, over-the-top style. Perhaps the sense was that the writing was stylized, so the performance should be, as well, but I disagree — I think the piece would have been beautifully effective if the performances had been understated, naturalistic, engaged with as though they were saying nothing unusual at all.

I’ve expressed a deep, abiding love for this strange, schizophrenic city, and the four disparate pieces did an excellent job of expressing that. I left the theatre, stepped into Uptown, and began the walk to my car positively buoyant. There’s a lot of local color in the Festival this year — but this was the one that, perhaps because of its very lack of focus, reminded me of why.