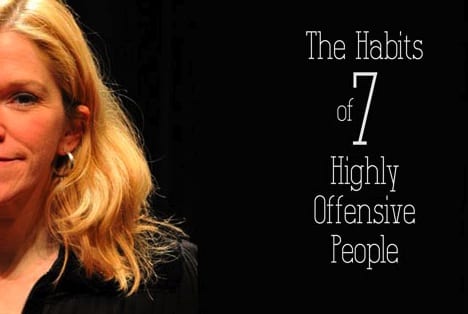 When I was making my tentative schedule of shows for this year’s Fringe, I came across The Habits of Seven Highly Offensive People. The blurb reads: Examine the foibles and hypocrisies of the human condition. This edgy, satirical look at American life goes after American stereotypes with a vengeance. Yup, sounded like something that should be on my must-see list.

Liz Woodworth changes personas as fast as she changes costumes; from a lateral-lisped republican speaking out against homosexuals (who are responsible for the fact that she’s still a 40-something virgin) to a self-involved, unaware-yet-uber-aware liberal hippy. The details of each character are so fine that it never feels like sweeping generalizations are being made. Woodworth leaves a lasting impression with each character, who only has less than 10 minutes each to state their claim. The show is not only funny, it’s impressive what Woodworth can do.

The one-woman show reminded me just how fun the Fringe is—finding these little nuggets of entertainment in a list of almost 200 shows is like finding someone you actually want to date on an online dating site.