While state legislative leaders declared concerns about frac sand mining off the table for the coming session, grassroots opponents in Southeastern Minnesota’s bluffs and sand hills are shifting their resistance to a different branch of government.

And taking the battle to the art centers.

Legislative leaders made clear Wednesday they have no interest in considering a ban on silica-sand mining in southeast Minnesota during the upcoming legislative session.

“If there was going to be a moratorium (on silica-sand mining), it probably would have happened last year,” Senate Majority Leader Tom Bakk, DFL-Cook, said during a legislative preview session with reporters at the Capitol. . . .

Echoing Bakk’s comments was Speaker of the House Paul Thissen, who said, “we need to let what we passed last year work.” . . .

Opponents of silica-sand mining say they are not surprised by the lack of interest among legislative leaders to pursue a ban in the region. Instead, they are shifting their attention to DFL Gov. Mark Dayton in hopes of convincing him to use his executive authority to impose a two-year moratorium on silica-sand mining.

Bobby King, a policy organizer with the Land Stewardship Project, said his organization already has gathered more than 2,000 signatures on a petition asking the governor to impose a moratorium under powers granted in the Critical Areas Act. King said a chief concern with last year’s legislation is that it will take time to get standards for silica-sand mining in place. For example, he said it likely will be a year before there are any air quality rules in place for this type of mining. . . .

Read the rest at the Post Bulletin. The Uptake has produced an out take of the exchange at the legislative preview, prompted by a question by Carlson: 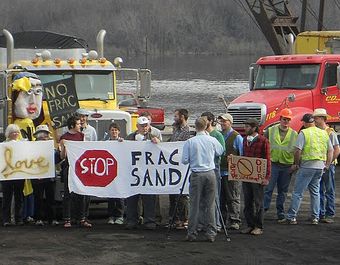 How original: Art groups name performance “What the Frack”

Given the kerfuffle that accompanied the cancellation of Frack Nation at the Frozen River Film Festival by pro-fracking forces, Bluestem can’t help but think the same folks won’t be quiet about a touring puppet show raising questions about silica sand mining.

The Dreamery Rural Arts Initiative, based in Wykoff, and the Heart of the Beast Puppet Theatre, of Minneapolis, will present a tour of “Let’s Talk About Sand,” a performance designed to encourage discussion of the frac-sand mining industry.

The performances take place at cities in southeastern Minnesota and northeastern Iowa next week.

“Let’s Talk About Sand” features a 15-minute performance of “What the Frack?” using hand-painted imagery and live music. Performers are actors from the region and Heart of the Beast Puppet Theatre. The program also includes a screening of the documentary film “The Price of Sand.”

Bluestem suspects that we’ll be reading objections to the Dreamery Rural Arts Initiative sponsoring the tour, since the group’s “programs are supported with contributions from the Southeastern Minnesota Arts Council with funds from the Minnesota State Legislature.”

It’s unclear whether this particular tour is sponsored by local or state arts council funds.

For what it’s worth, we’re hoping that Representatives Steve Drazkowski and Greg Davids, who represent the area, attend the family-oriented performances, as we can’t even imagine what photos of that might look like.

Photo: An unrelated puppet showed showed up at a civil disobedience action last year in Winona.