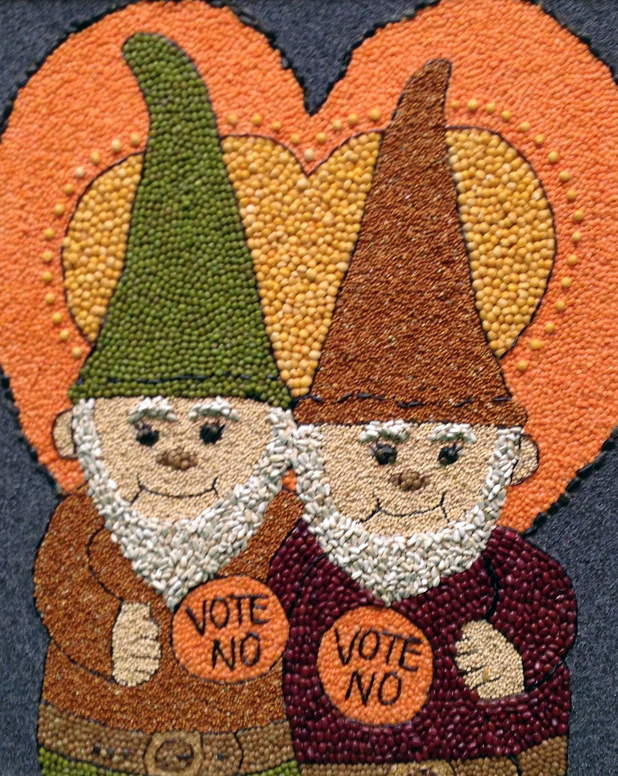 Despite its highfalutin name, the Fine Arts Building at the Minnesota State Fair tends to reward craft over art—and that’s the way people like it. There’s a distinctly populist slant to the art on display: from a figure covered in piano hammers (I checked and sure enough, the piece’s title was Piano Man, by House of Balls proprietor Allen Christian) to a portrait carved in a giant magnifying glass (Nicholas Legeros’s Look Closer) to a photo of a nude pregnant woman (Denise Mack’s Pregnancy Glow), the pieces selected for inclusion evoke less a sense of wonder or mystery than a sense of here’s-what-I-wanted-to-do-and-look!-I-done-went-and-did-it.

In Minnesota, we have more than our share of top-notch fine arts institutions (the Minneapolis Institute of Arts, the Walker, and the Weisman, for starters), but we also have at least our share of venues for middle-of-the-road art. Chainsaw art along the highway, portrait sketches at Mall of America, local landscapes at the Powderhorn Art Fair, infinite still-lifes at skyway galleries bearing the names of middle-aged women in outrageous scarves, and of course the State Fair itself, which many Gopher State artists have a love-hate relationship with—after all, artists displayed in the Fine Arts building join the company of Matisse, Rubens, and Picasso.

The problem is that there’s not enough conversation between Minnesota’s two art worlds. Today I visited the MIA, and the Minnesota galleries featured the intellectually impressive but deeply obscure work of Luke Aleckson and Justin Quinn. It’s a stark contrast to the MIA’s once-a-decade Foot in the Door, an uncurated riot of 12″x12″ works that’s an art-world equivalent to the Minnesota Fringe Festival. No danger of wooing any Fairgoers—or even members of the crowds flocking to Rembrandt in America—with Quinn’s thousands of iterations of the letter E (“This guy should go on Sesame Street,” quipped my companion) or Aleckson’s quasi-illusory works, which I still didn’t understand after reading the explanatory text twice.

But then, that’s not the MIA’s job—or at least, it shouldn’t be. What we need is a Minnesota Museum of Contemporary Folk Art, where careful curation can encourage critical thinking about what distinguishes art from craft. (I say “contemporary folk art” to exclude traditional folk art that’s designated as such simply because it was produced outside the Western tradition—for example, traditional Native art. That deserves its own space.) A lot of the work on display at the State Fair is folky, but it’s not necessarily folk art: one of the defining characteristics of folk art is its lack of conventional craft, its naïvete. 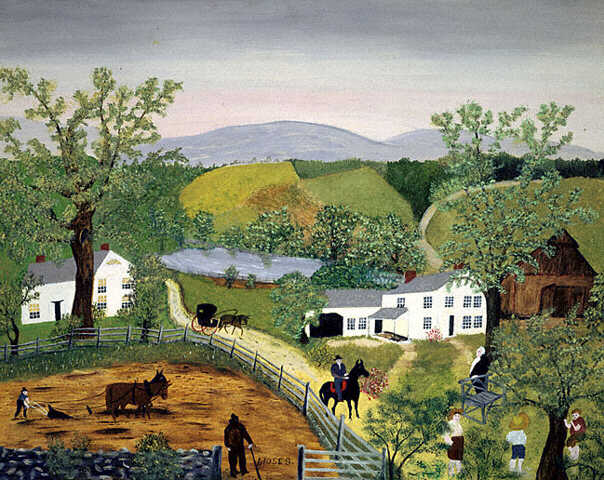 Think of Grandma Moses (above) or Henry Darger: untrained, self-taught artists whose impact comes from their fertile imaginations and undeniable artistic gifts, their ability to speak forcefully in visual vernacular. State Fair art, by contrast, has an overabundance of craft and a shortage of artistic vision. (Pamela Valfer’s Roadkill Quilt, a macabre assemblage of mink pelts, was a shoo-in for the Walker Art Center’s “Ingenuity Award.”)

What would a Minnesota Museum of Folk Art look like? Well, if I had to pick and choose a starter collection for such an institution, I’d grab some street art, some of the work produced by artists at the Interact Center, some of the weird and wonderful work from the farther reaches of Franconia Sculpture Park, and a lot of pieces from the venues named above—but selected for vision and impact, not for craft and execution. Skip the perfectly-rendered chainsaw eagle, keep the bucket-head sculptures made by employees at the scrap metal yard in their spare time. Park an art car in the lobby. And build a permanent gallery for crop art.