Trinity Works, in coalition with what it says are 30 Twin Cities churches, is planning “Humility 2014,” an infiltration of Twin Cities Pride by outreach workers hoping to convince members of the LGBT community to leave the “lifestyle” as well as their partners, family, and friends, and become heterosexual born-again Christians. The group even had a failed plan to rent out the Gay 90s as a church during Pride.

The group says it has about 300 outreach workers scheduled for Pride, and those workers will be based at First Baptist Church on Hennepin Avenue along the Pride parade route.

Its leader Steven Uggen told a group gathered in April at The Well, A Living Church in Robbinsdale, that people will be cured of “HIV or AIDS” at the Pride festivities. Uggen says that by healing those with HIV, it will prove to the LGBT community that they should find Jesus and leave “the lifestyle.”

“One of the words we got out of this outreach, the Lord really wanted to demonstrate his goodness to this community by releasing healing of HIV and AIDS, so we believe we’re going to see people healed of HIV and AIDS and we’re just, we’re carrying that word of the Lord into this outreach. And that will be part of our training just praying with boldness for the releasing of healing power and then sending them back to their doctors literally after praying for them. ‘Here’s what I want you to do: go to your doctor, get tested for HIV or AIDS and when you come back negative, you’ve got a decision to make whether you’re gonna serve the God who just healed you’ and then give them some gospel materials that they can take with them and encourage them to call on us and let us know and I’m confident that we’re going to have people healed of HIV and AIDS that are going to be contacting us. The funny thing is Jesus healed the 10 lepers and only one came back to acknowledge him so there may be 10 that get healed but only one come back, you know. This is a strategy that God wants to use so the very fruit of their sin is what he wants to, like, take away to show them his kindness and his goodness. I mean it’s just totally Jesus. I mean it’s like totally his way so we’re excited about that.” [Audio below] 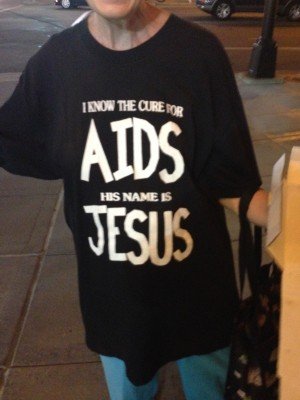 To date, there have been no confirmed “healings” of HIV through prayer anywhere in the world. The standard treatment for HIV infection, anti-retroviral medications, have made the disease a manageable one for those with access to health care.

Already during Pride weekend, Trinity Works outreach workers have been spotted in Minneapolis. This man (right), photographed by Peter Gokey just outside the Saloon, appears to confirm Trinity Works’ member belief in prayer as a cure for HIV.