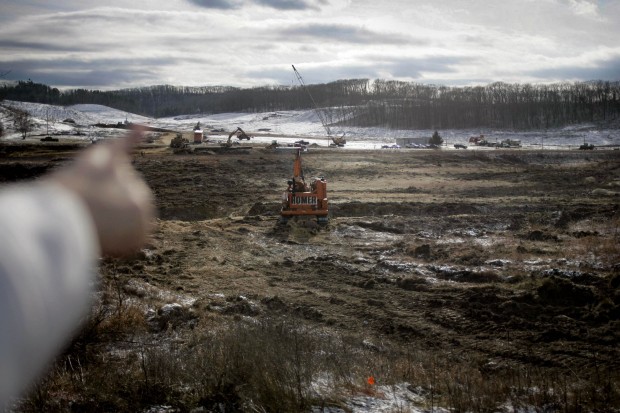 The Minnesota Environmental Quality Board has posted the proposed agenda for its Wed., September 19, 1:00-4:00 p.m. meeting in the MPCA  Board  Room, 520 Lafayette Road, St. Paul. According to the document packet, which includes letters and emails supporting a statewide Generic Environmental Impact Study (GEIS) of the industrial sand industry, representatives of the business community will testify on Wednesday.

Last month, the EBQ took testimony from citizens and grassroots groups seeking the GEIS, as well a local government officials whose cities and counties had received frac sand mining proposals. Citizens and their communities are concerned about the potentially adverse health, economic and environmental consequences of industrial-scale mining Minnesota’s rich deposits of silica sand for petroleum and natural gas “fracking.”

Minnesota has no oil or gas shale; the sand is mined in open pits, dry or wet processed, then hauled by train or barge to oil or gas fields in other states.

At its August meeting, the EQB heard testimony in support of ordering a GEIS. The Board also heard from invited local officials about local government experiences with and responses to frac sand mining operations and proposals, and heard about the Minnesota Mississippi River Parkway Commission and the Minnesota Great River Road. There was no testimony from the business community. Consequently, EQB staff sought additional testimony. Representatives of the Minnesota Chamber of Commerce, several local Chambers of Commerce, and the industrial sand industry are expected to address the Board.

EQB staff has continued to receive correspondence pertaining to the issue, which is included in the packet. Additionally, a phone call was received from Victoria Jaskierski from Wabasha, who expressed support for a GEIS.

Bluestem thinks that the business community responses should prove fascinating. Will those addressing the board be reading from a unified playbook? Or will industry and the state Chamber of Commerce perspectives vary from local chambers–and if so, what will the differences be?

Rich Budinger of Fairmount Minerals is WISA’s President. He says, “We’re going to be looking for as many members that are willing and able to adhere to the strict code of conduct that’s in place, a requirement of membership, as possible. The goal of the association is to set a gold standard for safe and environmentally responsible sand mining operations in the state of Wisconsin.”

Industrial sand mining and frac sand mining in particular can be unpopular in towns where new mines spring up. Budinger says part of WISA’s charge will be to educate the public about an industry that has been in Wisconsin for more than a century, but has grown in recent years.

Anti-frac sand activist Pat Popple of Chippewa Falls does not see it that way. “Sounds like another spin to me.” She says the Wisconsin Industrial Sand Mining Association will likely be more of a lobbying firm. “There probably will be a push to make it sound good, but making it sound good does not always mean it’s going to be good.”

In Superior Silica ready to join self-regulation group, the Chippewa Valley News reported that a fifth, Texas-based company was seeking to enlist in that Mordorian brigade. The paper also reported:

. . . an announcement this week that sand found in North Dakota, a state booming from oil production, may be good enough to be used as frac sand.

It is imperative for the health, welfare and safety of our citizens and communities for your agencies to take the time for an in depth study of all the issues concerning Health, Air Quality, Water Quality and Quantity, Road and Traffic issues, and Socio- Economic impacts.

As you are aware, our good neighbors in Wisconsin were deluged with sand mines over the last three years with little to no support from their state agencies and now are suffering the consequences of the frac sand boom.

The City of Winona and Goodhue County have submitted resolutions of support for the GEIS. The City of Wabasha had voted to support a GEIS as well, according to an email submitted by Wabasha County.

The Coalition of Greater Minnesota Cities (CGMC) submitted a two-page letter outlining the reasons why it supports the proposed GEIS. More than seventy-five rural cities are members of CGMC.

(Photo: Clearing the site of a frac sand mine in Wisconsin)