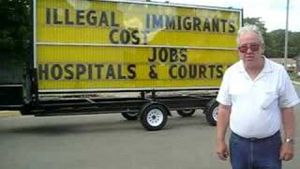 When Bluestem first started publishing, organized anti-immigrant activity ran high, with Minutemen giving talks and Minnesotans Seeking Immigration Reform (MinnSIR) rallying up to near one hundred people and Neo-Nazis using the issue in an attempt to recruit members.

But things have quiet since the fall of 2010.

We had wondered if plans by the Senate and President Obama to work on comprehensive immigration reform would bring the nativists out of retirement, but there’s been little in the papers. No meetings, no speakers, no rallies.

In one of the few local-angle articles about the issue in Greater Minnesota news media, Owatonna, Faribault residents weigh in on immigration reform efforts, the Owatonna People’s Press talked to leaders in the Albert Lea-based Minnesota Coalition for Immigration Reduction:

But not everyone in the region agrees that the proposed path to citizenship for undocumented aliens is desirable.

“We feel the only way to take care of people who are here illegally is to send them home,” said Paul Westrum, founder of the Albert Lea-based Minnesota Coalition for Immigration Reduction. “Tell them they have so many days to go home and if you don’t, we [the U.S. government] will send you, and you will have to pay for it.”

Westrum’s organization has members in 32 cities across southern Minnesota, including Owatonna. He says the growth of the coalition is due, in large part, to citizens’ concern over the money spent on those who are here illegally. . . .

Well, maybe not. The article continues:

Marlene Nelson of Owatonna was a part of the local chapter for seven years, though she said Tuesday that the Owatonna chapter has not been active for the past five years. Still, her feelings have not changed on the subject.

The Owatonna chapter was one of the most visible chapters, although the location of the 32 cities has never been revealed.

Will warmer weather revive the organized movement, or has its time passed?