The Minnesota state budget forecast came out with more bad news – a deficit of $1.1B for the biennium (2 year) cycle of 2014-2015. How can we have these deficits year after year?

The answer is a short and simple one: it’s actually worse than what they are telling us. But a new DFL controlled legislature will be able to work with Governor Dayton to take care of it, once and for all, without an awful lot of pain. The longer answer is that we can expect even more fundamental reform in the works.

Let’s start with the forecast. The office of Management & Budget is required to make budget forecasts so that the Legislature can fulfill its constitutional obligation to prepare a balanced budget. But they are constrained by a 2002 law which forbids them from using inflation in calculating projected expenses in coming years – while still counting inflation for revenue collections. The official forecast is thus heavily tilted to show that everything is rosy. Knowing that this is ridiculous, the official projects do include a full accounting for inflation in the footnotes, so below are the numbers they are not allowed to tell us – but I can:

As you can see, there is a structural deficit of roughly $2B every biennium, about a billion bucks a year. That is what the new Legislature has inherited. 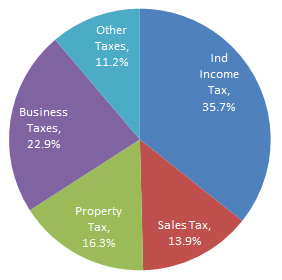 There is good news, however, if you look into it further. The Department of Revenue publishes a “Tax Incidence Study” (2011 here in pdf) to show just who pays the taxes in the state by income level. State and local governments are all constrained by the same laws, so it only makes sense to look at the two together. Business taxes can be assigned to each income level based on what people spend in stores et cetera, so all taxes are distributed to individuals in this analysis, from the sources shown in this diagram.

These taxes fall on different sectors of the population by income, so the meat of the study is who winds up paying what. Dividing families into 10 equal ranges of 263,000 households gives us this chart of the net effective rate paid by each group, here listed by the lowest annual income in k$/yr for that group: 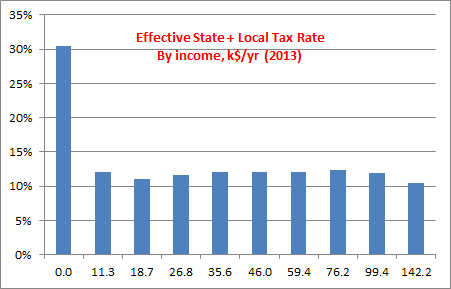 Two features are very prominent. The first is that the poorest among us, earning less than $11.3k per year, appear to pay an extremely high rate. Some of this is the result of policies that are truly regressive, such as taxing apartments higher than houses, and some of it is because many people in this category are “temporarily poor” such as those who go back to school – they might spend at a much higher rate than their income.

Simply raising the highest two tenths of the population up to a rate of 12.3% – the rate paid by the 8th highest group, raises $1.7B every year – more than closing the budget gap. This can be accomplished by a small increase in the income tax rate at the high end.

That is almost certainly what Governor Dayton will propose, at least as an opening plan. We still need about $1.1B left to pay back the “K-12 Shift” – a gimmick whereby the state delayed payments, effectively borrowing from every school district in the state to make the budget look better. And there is another $1.7B in possible losses should the Federal government go over the “Fiscal Cliff” on 1 January. The hole we are in is big and it could indeed become much bigger.

More interesting, however, is how Governor Dayton has been talking about more fundamental reform in how we tax and spend in state and local governments. We do not have any details yet, but there is little doubt that there is room for change. A buy-down of property taxes through better funding of counties may be a start – given that they are both the local arm of the state and the local unit of government to rural areas. Unfunded mandates from the state fall heavily on counties, and with the tax increase outlined above to a flat 12.1% – 12.3% across all incomes would give as much as $700M to think about a buy-down of property taxes after solving the structural problems.

The dour forecast may actually work in favor of reform to the extent that it dampens demand from groups that have been waiting for the DFL to control government again, especially cities hoping for more Local Government Aid (LGA). Cities are generally used to not having LGA, essentially not believing in Santa given that they haven’t seen him in a while. There is always a chance they may be patient. Governor Dayton will have to work to make that happen, however.

All in all, the situation is dire – but highly correctable with some sensible leadership. Minnesota is in bad shape, but it can be solved simply by making tax collection more uniform across all incomes.

One last note – while the net rate is 12.1% of defined income, it is worth noting that the definition of “income” does not include many sources, particularly business income. The total Gross State Product (GSP) is 32% bigger than the taxable income identified, so the net rate for all state and local taxes combined is only 9.2% of GSP – far lower than the roughly 10% and more it was in the 1990s. Every government service we enjoy in this state, from police to paramedics to schools to parks to local roads, costs us 9 cents of every dollar in the state economy. That seems like one Hell of a bargain, if you ask me.