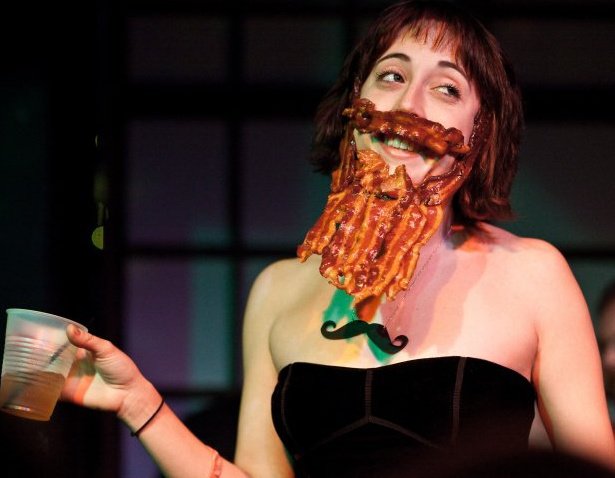 This year The Minnesota Beard-Off is on Saturday March 24. I participated in the event two years ago, the very first, which was fabulously put together by the punny and clever Art Allen. I met some wonderful(ly hairy) people that night and even became a finalist in my category (“freestyle,” which includes the fake lady-beards). I ended up covered in glitter and delightfully happy (even though I didn’t win) when I wore my bacon beard home that night.

It was my first encounter with that year’s emcee—the charming and witty Andy Sturdevant (who is the one who suggested to Trivia Mafia that they have me judge a Drinkin’ Spelling Bee)—and the lovely Courtney McLean. I attended last year and stayed out of the spotlight but this year I will be back with an entry into the freestyle category again. This one will be a little different, but I’m hoping it will be as successful as my first experience competing in the Beard-Off.

The night of the first Beard-Off was one where I met many of my Titter-only friends in person for the first time, or got to know them a little better. Paul Wichser’s full-body hair masterpiece got him into the freestyle-finalist group with me, and I will never forget the image of him with star-shaped body-hair. There was a woodchip lady-beard that gave me a run for my money, and there are always some pretty fantastic actual beards and mustaches that duel it out for the win.

One thing I like even more than being on stage with hundreds of adoring beard-fans is a venue full of men with facial hair. If you share my love for bearded men, you won’t want to miss this. Beards, beard-lovers, and beard-enthusiasts alike will fill up First Avenue on March 24 for the Third Annual Beard-Off competition—which is this year open to contestants from all over the state. The MC will be Mike Fotis of the Brave New Workshop (those guys are all kinds of funny, so this should be good). This year the Mustache Rangers will join Mike on stage to provide some hairy improvisation comedy, which is sure to be hairlarious!

My favorite funny-lady Courtney McLean returns to judge and this year, along with fellow veterans from the last two years: Justin Black and John Friedman! New this year is the addition of a fourth judge, Ragnar the Viking, who reportedly has the mightiest of beards. I’m expecting this year to be the best MN Beard-Off yet, so hurry and get your tickets online; they’re going fast!

Hope to see you there. Be at your hairiest!