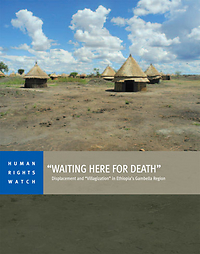 How is an entire Minnesota community supposed to cope when every person in that community, all at the same time, must cope with the recent violent death or the sudden, suspicious disappearance of a mother or father, a brother or sister, a relative or friend?

This was the urgent question of a May 26 St. Paul gathering of 150 Minnesotans who are members of the Anuak tribe of Ethiopia and South Sudan.

A recent outbreak of widespread killing, rape, torture and disappearance of members of Ethiopia’s Anuak tribe, of whom nearly 2,000 live as refugees in Minnesota today, is sending the Anuak of this state into a controlled panic of worry, urgent meetings and frenzied actions on behalf of loved ones who are ensnared in an outbreak of a vicious ethnic cleansing of the Anuak tribe back home.

“Psychologically, it is killing us,” said Magn Nyang, an Anuak who lives in Spring Lake Park. “People are very depressed and angry. We are trying to figure out, what can we do?”

At the St. Paul gathering, which was held in a meeting hall above the Fasika Ethiopian restaurant on Snelling Avenue, and in meetings at churches, meeting halls and living rooms around the state, Anuak are gathering these days to respond to the crisis.

The cause of the violence — detailed in a recent documentary aired on PBS’ Lehrer News Hour, and in a Human Rights Watch Report — is a massive forced relocation of 70,000 Anuak and other indigenous peoples from their ancestral lands in Ethiopia, to make way for mega-farms being created by foreign investors from Saudi Arabia, India, China and other nations.

A handful of armed Anuak rebels have fought the relocations by ambushing Ethiopian soldiers, which in turn has prompted Ethiopian troops in the Anuak lands to seek vastly disproportional revenge by killing, torturing and “disappearing” innocent Anuak.

Politically active Anuak have met in recent weeks with the staffs of Senator Al Franken and Representative Michelle Bachmann, urging them to bring all possible influence, through the U.S. Embassy in Addis Ababa or through U.S. government aid programs, on the Ethiopian government to stop the bloodshed.

“We are writing you with a sense of the utmost urgency on behalf of our friends and families in our homeland,” the Gambella Relief Organization, a Minnesota group, wrote to Sen. Franken in a recent letter detailing dozens of recent cases of the murder, rape and disappearance of Anuak in Ethiopia, at the hands of government soldiers.

The article, written in English in Minnesota on behalf of an Ethiopian Anuak rebel named Ngeli Opiew, vowed that “unless the terms of the land grab in Gambella are reversed in favor of Gambella people, there won’t be peace in the region.” The article promised the rebels “will fight to stop the sale of Anuak land to foreigners and for the return of displaced Anuaks to their ancestral lands.”

Akuthi Okoth, an Anuak from Stillwater, has taken an entirely different approach in response to the crisis. Working with other Anuak women, she started a daily telephone conference call whose members share their stories and fears for their relatives who are in danger, or who have died, and ask for the prayers of the others on the call. Up to 80 Anuak from Minnesota and around the world participate on the call.

“Most of us work during the day, so it’s difficult to get together physically,” Okoth said. “There isn’t one of us who doesn’t have a loved one who has been affected. It is so sad, and we are so sad, so sad. So we pray.”

Aduk Okway, an Anuak woman from Rochester, has asked for prayers recently for her brother, who she says was beaten by Ethiopian troops and has been missing for a month. “We don’t know if he’s in jail or killed,” Okway said. “He has a knife wound jn his stomach and his front teeth are broken. My heart and my whole body is hurting with my brother missing.  I am crying out so the Ethiopian government will leave our land.”

The Anuak refugees in Minnesota originally came to this state because the Ethiopian government, which came to power in a 1991 coup, began ethnically cleansing their tribe almost immediately with periodic massacres in which uniformed soldiers simply marched into Anuak villages and started shooting men and boys and raping women.

The bloodiest of these pogroms took place on December 13, 2003, when more than 200 Ethiopian soldiers killed 426 Anuak men execution-style in the town of Gambella, the largest town in Anuak territory. As verified by journalists and in later, lengthy reports by Human Rights Watch and other groups, the uniformed soldiers systematically went house-to-house in Gambella, calling out the names of the men who were the educated leadership of the Anuak tribe. They told the men to run and then shot them in the back.

This carnage directly struck the Anuak diaspora communities around the world, and their broader host cultures, including in Minnesota, where most Anuak refugees outside of Africa have have settled. This state, with its roughly 2,000 Anuak, has the world’s largest diaspora population of the tribe.

Because the Anuak tribe is tiny, numbering only 100,000 or so, every Anuak living in Minnesota has close family members or friends who died in the 2003 massacre, or were driven to live as penniless refugees in neighboring Sudan or Kenya as a result.

The recent surge of ethnic cleansing has had a similar result, causing thousands of Anuak to flee across the borders of Sudan and Kenya for safety.

“This problem is affecting the economy of Minnesota, because every Anuak here is sending money back to their friends and family in Ethiopia and Kenya,” said Gilo, a resident of Gambella who asked that his last name not be used because his wife and children remain in Ethiopia and could be targeted as a result.

At a dinner meeting at the Ramada Plaza motel in Minneapolis last week, attended by around 40 Anuaks and native Minnesotans gathered to discuss the crisis, Gilo noted that the Anuak diaspora, as small as it is, has become divided over the best way to deal with the crisis in Ethiopia.

Some Anuak groups in Minnesota favor striving for dialog with the Ethiopian government, as impossible as that may seem; while other Anuak focus on creating coalitions with other Ethiopian minority groups and tribes to pressure the government; while others actively support the Anuak rebels fighting to repulse Ethiopian troops.

Every December 13 since 2003, memorials are held around the state to remember those Anuak who perished in the massacre.

Even if they were originally airlifted to begin life in other states, most Anuak eventually make their way to live in Minnesota.

“The Anuak consider Minnesota to be their safe haven,” said Akuthi Okoth. “People here give you a big smile from far away. They treat you like you belong. It’s a state that really cares about education and family. The kids feel safe here. It’s home.”