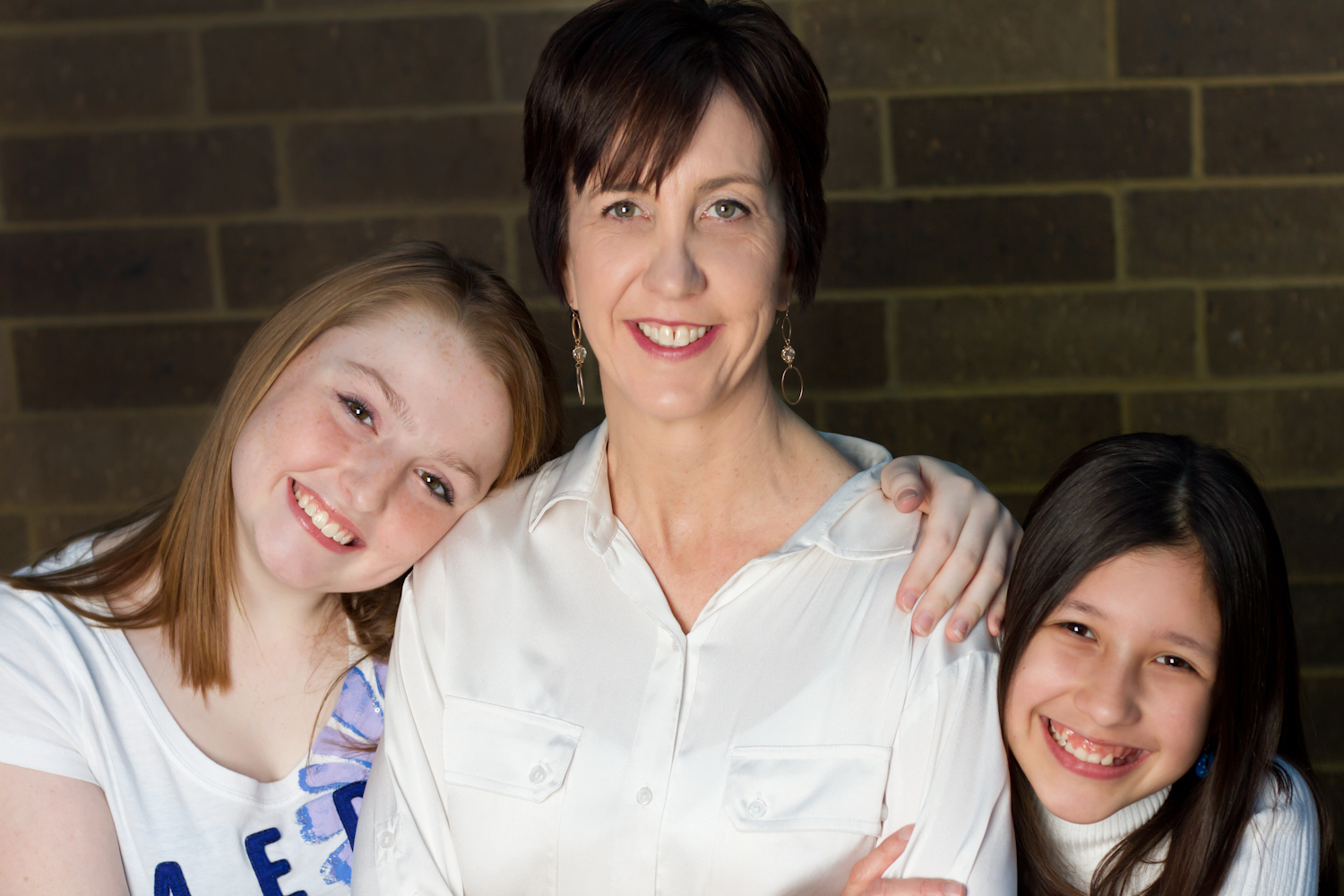 Brigitte Hargrove with her niece Christina (in white) and her adopted daughter Essence (in black). (Photos by Alleen Brown.)

Brianna’s mom, Tia Vasquez, always hoped to one day adopt a child, but she didn’t know it would be a 15-year-old who’d spent more than a decade being raised by the foster care system and state institutions.

Brianna entered foster care at four years old. Early trauma made her a difficult child, who was passed from foster home to foster home. She was adopted when she was seven, but abuse at that home landed her in a state institution, where she learned to control her severe behavior.

Now she’s entering a new phase of her life. The transition into the Vasquez family hasn’t been flawless — there have been arguments and adjustments, but Brianna is finding plenty to like: “That I actually have a permanent home and that I have people who love me, and I love them, and they will always be there to take care of me,” she said. For Brianna, that’s a new feeling. 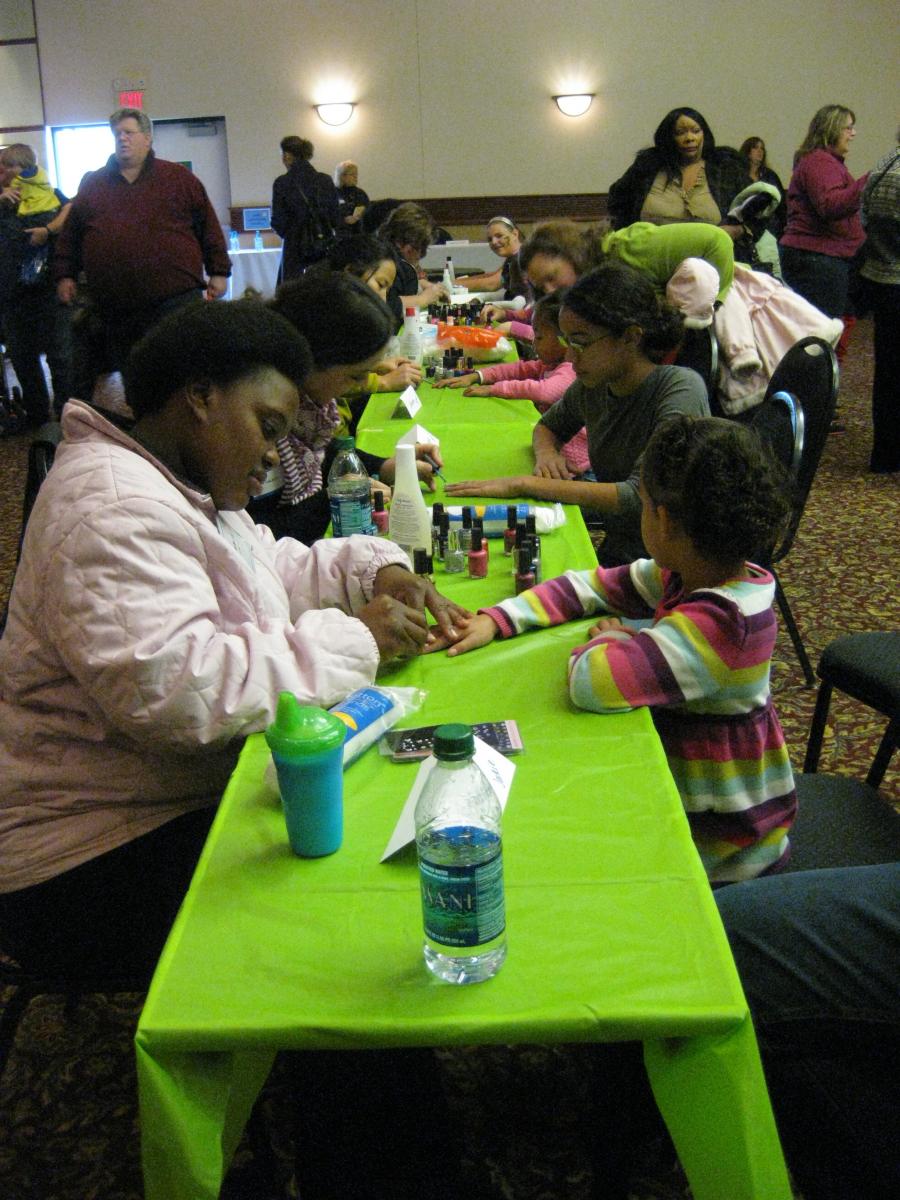 Little girls getting their nails done at Circus of the Heart celebration.

Families like hers celebrated national Adoption Month last Sunday at the 15th Circus of the Heart event, an annual party put on by the Department of Health and Human Services to celebrate the 540 Minnesota kids who were adopted out of foster care last year and to encourage families to consider adoption.

The good news: there are fewer kids waiting for adoptive families now than there were 15 years ago. At the first Circus of the Heart event, there were 1,000 wards of the state waiting in foster care for adoption. Today there are 355.

In a lot of ways, five-year-old Essence is lucky. Her godmother, Brigitte Hargrove, took her in when she was three and adopted her a year later. 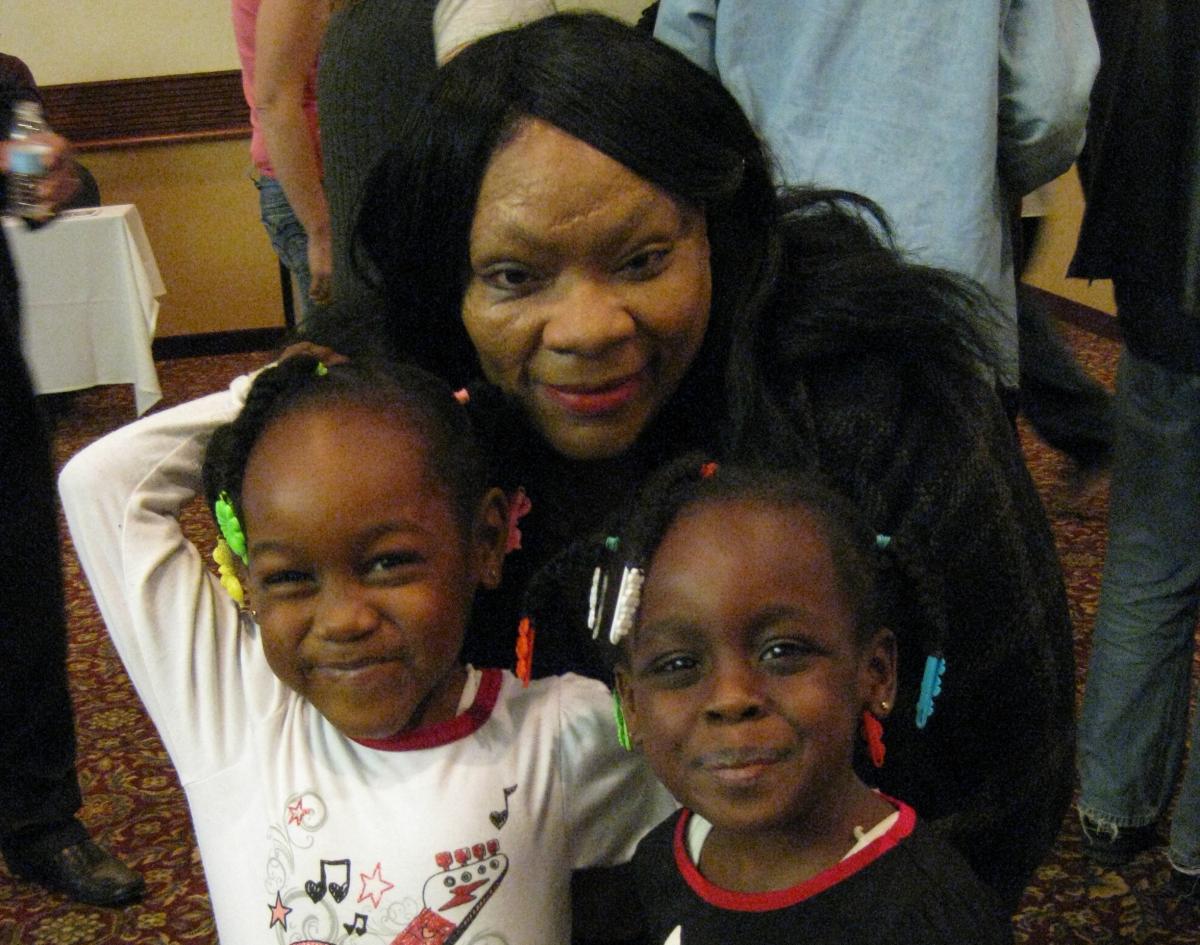 Brigitte Hargrove with her niece Christina (in white) and her adopted daughter Essence (in black).

On Sunday, the snakes at the Circus event made Essence laugh. She’s made great progress since the months when she wouldn’t smile or talk.

Watching the little girl open up has been the most rewarding part of the adoption for Hargrove, who originally thought she would just provide temporary foster care. 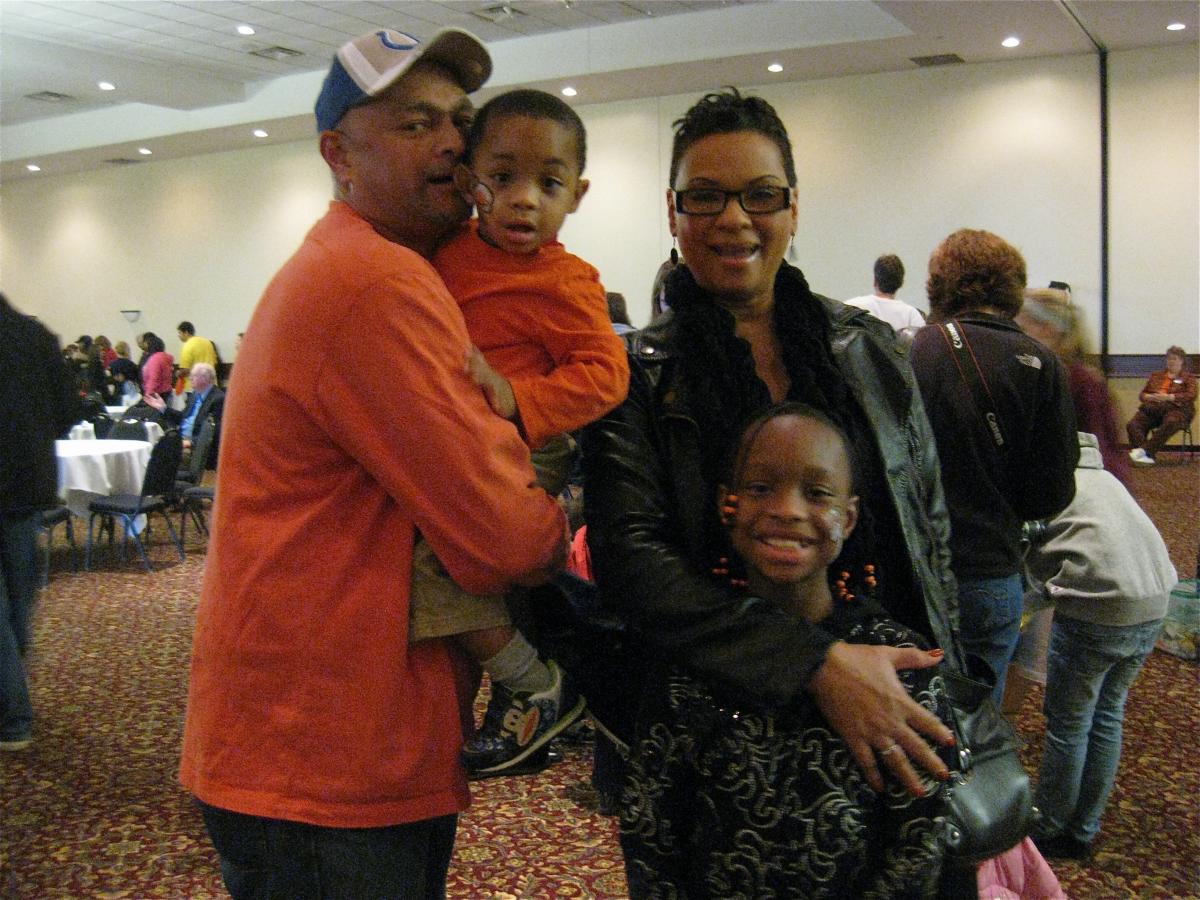 Janet Black is getting ready to adopt her grandson Jefferey. Pictured here with her partner Joseph and daughter Shannon.

Most of the 355 kids have been involuntarily removed from their birth families because of safety concerns. Many have severe behavior problems caused by abuse, neglect or abandonment and worsened by years of instability.

On average, kids in foster care wait 16.5 months before they’re adopted, but some age out of the system.

The federal government recently passed legislation that encourages states to continue providing resources to young people in foster care until they’re 21. “While that is very good, they don’t have permanent legal families,” said DHS assistant commissioner Erin Sullivan Sutton. “They [don’t] have somebody to call home when they’re 21, 25, 35.”

Way down from 10 years ago

The decrease in waiting children is a result of both national and local changes. 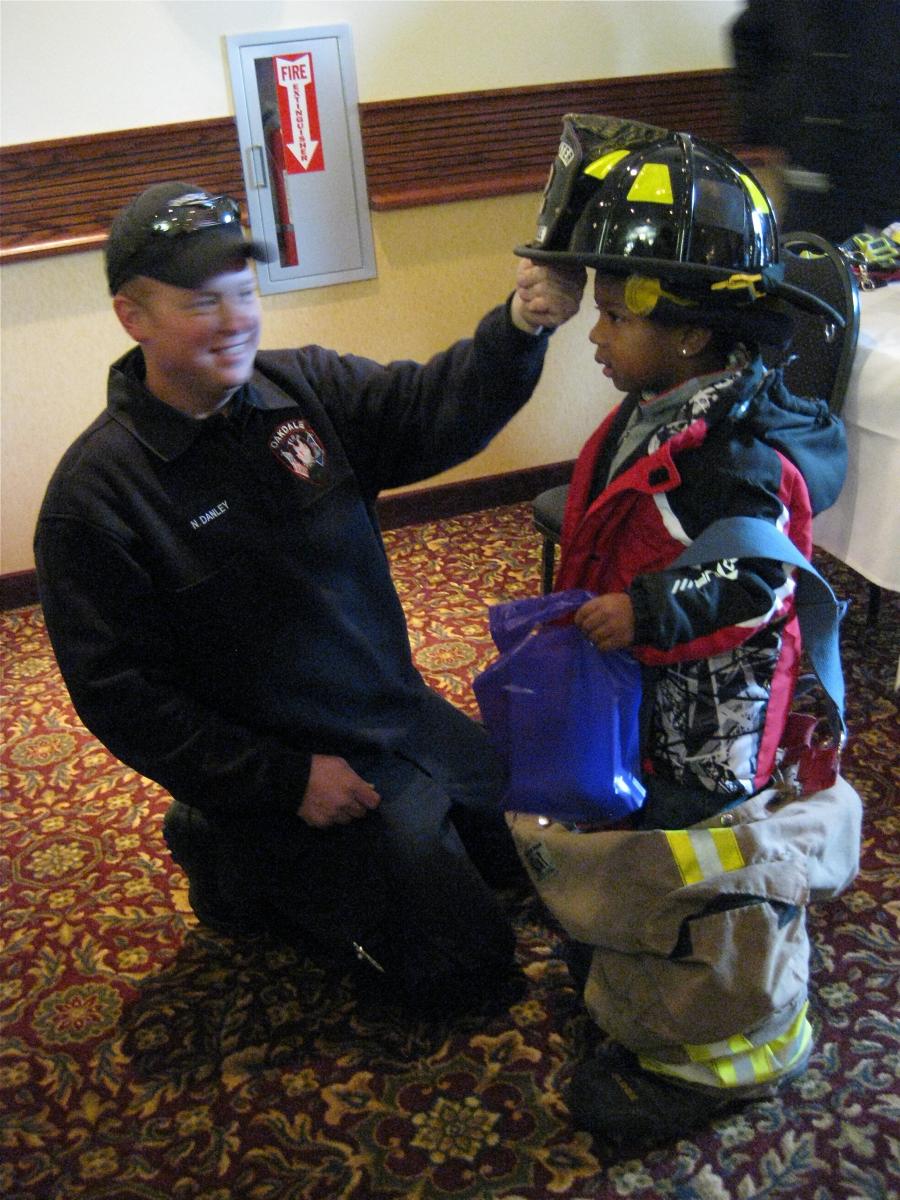 A firefighter was one of the attractions at Circus of the Heart.

“It recognizes that the state isn’t a good parent for kids,” said Sullivan Sutton. “Hopefully families can be reunified, but if that’s not possible in a timely way, we have an obligation to find a permanent home for kids.”

Alongside the federal changes, Minnesota’s DHS partnered with private adoption agencies that now share the task of connecting potential adoptive families with kids who need one most.

A friend who had adopted several children convinced Vasquez to think about adopting an older child.

Vasquez attended a training seminar in January and by August she had Brianna.

It was a somber matchmaking game. Vasquez and her biological daughter Mia scanned the MN Adopt web site for photos and biographies of kids that might be a good fit. Mia wanted a big sister, so they looked for a girl older than 11. Several times, they thought they found a match, but decided it wasn’t quite right after learning more.

Finally, an adoption worker sent Mia and Vasquez a brief paragraph about Brianna. Before they met her or even saw a picture, they decided she was the one.

Since other families were also interested in Brianna, the Vasquez family was interviewed before a caseworker confirmed that the match was a good one.

After a handful of meetings and overnight stays, Brianna moved in. The whole process took less than a year.

Adjusting to a new family

“Many of these kids have learned through their experience not to trust. As they trust and adjust to the fact that this family is going to commit to them forever, it helps relieve some of their anxiety,” said Sullivan Sutton. “It opens up a whole new world off opportunities that kids in foster care had not envisioned for themselves.”

Brianna is doing well overall, especially in school, but the Vasquez family has done their share of struggling with the new arrangement.

“The hardest thing for me and all of us is agreeing and disagreeing, different beliefs and stuff, what I think and what they think,” Brianna said. She tries to remember, “You’re always, no matter what, going to have fights and things like that, but you’ll always get through it.”

Overall, 11-year-old Mia is happy to leave behind her days as an only child. Lucky for her, Brianna is as addicted to Wii Mario Kart as Mia is.

For families adopting older children, Sullivan Sutton recommends endless patience. In the end she said, adoption is a matter of Minnesota’ wellbeing. “If we could help them have permanent families, they can experience success,” she said. “They want to be contributing members of society as an adult.”