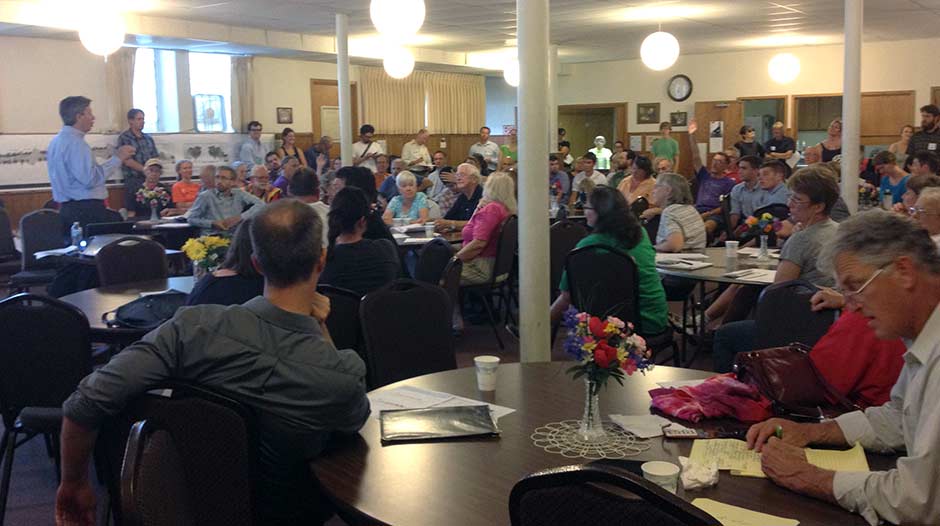 The room was packed during the evening meeting regarding the Minnehaha Avenue reconstruction project.

Last Thursday, two public meetings were held by Hennepin County to discuss the Minnehaha Avenue reconstruction that is planned to begin in the spring of 2015. Read the latest plan details.

The meetings were lead by Michael Schroeder, a consultant from LHB, who began the session by stating, “We have lots of diverse interests to balance.”

The diversity of opinions and perspectives quickly became clear when the meeting was opened up to resident input and questions.

While people disagreed about the best solution for the reconstruction project, at the heart of the comments was a desire to see a project that would make the roadway safer for all users, help businesses thrive in the neighborhood, and have a reasonable price tag.

Steve Krause, owner of Minnehaha Lake, Wine, and Spirits, captured the sentiment when he commented, “We need to make the road better for all classes of users. Why don’t we make it better for everyone? That’s the challenge of engineering.”

Business owners as well as some residents expressed a concern about the significant loss of parking due to the bumpouts. Hennepin County estimates that approximately 25%-32% of parking spaces will be eliminated, depending on the plan that is chosen. Some business owners state that the majority of their business comes from vehicle traffic and that eliminating such a large portion of parking might drive customers to go elsewhere.

One business owner commented, “The idea that the bumpout will protect the pedestrians when we’re the third safest arterial corridor just seems a little overkill and it’s going to bottle neck our entire street and wipe away a huge amount of our parking. Minnehaha has a lot of new businesses and we are all trying to make this work and to be shut down for two years and then to have a squeezed street? That’s going to be a big problem.”

Scott Cramer, owner of Northern Sun Merchandising, added, “I’m on Lake Street, and I think the bumpouts are a total waste of time, I cross the street all of the time as a pedestrian and that extra 12 feet doesn’t really matter, it’s the volume of traffic on the street itself whether I can get across the road.”

Kristy Hagberg, a neighbor and block club leader, commented, “We’re concerned about the loss of parking spaces. Since Minnehaha has been built up, I’ve been walking and utilizing these close small businesses because I think its really good for the community, but if you take away the parking, there’s many problems. They lose a bit of business and the parking gets squeezed into our neighborhood.”

Where Will the Snow Go?

Attendees at both meetings brought up concerns about snow removal and the impact snow has on parking spaces. Scott, a resident on Minnehaha Avenue commented, “Where will the snow go? It never gets plowed to the curb, never! We need parking. We have a major road with emergency vehicles.”

Resident Robin Brahms added, “With this new plan, if you have a fire in one of the apartment buildings, where does it [the fire truck] go, where does the traffic go? Same thing with an ambulance, and that’s on a good day and not on a day where there’s snow piled up.”

Where the snow would go is not readily apparent. If it is pushed up on to the bumpouts or in a bus stop area, pedestrians would have to navigate piles of snow and ice. If it is left in a parking space, the number of spaces for vehicles is squeezed.

While one evening meeting attendee commented, “Bicyclists should be happy with what they’ve got, we’re way ahead of the rest of the country,” a significant portion of the meeting attendees made several cases in favor of a cycle track option.

Kia, a neighborhood resident commented, “The reason why so many of us don’t ride on Minnehaha now is because we don’t want to be doored. I don’t want to be doored, I’ve had that happen several times, and I do anything I can to avoid it. I do not feel like the way it [the road] is now is safe. And I definitely wouldn’t want my kids out there.”

Other residents voiced similar opinions, stating that while they might ride on Minnehaha, they definitely wouldn’t take their children on the roadway. Nick Mason, a resident and committee chair member on the Bicycle Advisory Committee, stated, “I walk, bike, and drive on Minnehaha almost every day…. As commuter bicyclist, I feel great, I love to go fast in the bike lane, but that is not typical of most people who want to ride bikes in the city, and it doesn’t align with the city’s goals.” He added, “When I have my kids with me…I do not take them on Minnehaha, I take them on Snelling, but the problem is that all of the destinations – I want to spend money, eat, go to the hardware store, get pizza – and they all happen to be on Minnehaha, so I need to get there.”

Sheldon Mains, director of Spokes, added, “What we’ve heard consistently is that paint isn’t going to stop a car. When you separate the cars from the cyclists, it’s safer from everyone….Let’s get some creative engineering going, let’s think about the best thing we can do for cars, bikes, and pedestrians.”

In his presentation, Nick Peterson commented that Hennepin County reviewed the studies that were brought forward by bicycle advocacy groups, pointing to the benefits of cycle tracks, including increased safety and an increased feeling of comfort by bike riders on the road. He said, “Cycle tracks are safe in the right setting, based on the number of access points. County staff don’t recommend a cycle track in accordance with the research that we did.”

Several attendees disagreed with Peterson’s statement about the quality of the research, including Mason and Ethan Fawley of the Minneapolis Bicycle Coalition. Mason explained, “We have submitted multiple resolutions to the Council, included 20 pieces of data and some of the latest research supports cycle tracks. They are becoming common place. Some of the latest research does suggest that cycle tracks are safer.”

Once in a Lifetime Opportunity

The roadway is expected to last 30-50 years, and several attendees spoke about the importance of considering a design that will shape the roadway to meet the needs of future users. One neighbor commented, “There is a new generation of people who are coming out [of high school and college] and they ride bikes only. This is going to be a problem. They’re be a whole lot more bikes on the road.”

Josh Houdek, who is a block club leader and with the Sierra Club, commented, “I drive Minnehaha regularly, I bike it regularly, and I also walk occasionally across it. I see this project as once in a 50-to-60 year opportunity to transform this corridor from a street that I see has pretty fast moving road…. I see this as an opportunity to transform it into a neighborhood asset. I think a cycle track can do that, I think more attention to bicycle and pedestrian safety and infrastructure can do that, and I think that will actually benefit businesses. I know I will likely visit more businesses when I can access them in different ways than just driving down the street.”

In a previous article, community leaders mentioned that they didn’t feel as if the County was doing enough to include residents in the decision-making process. Lois Hill, a resident on Minnehaha Avenue, spoke to this issue, “The thing for me, that I find appalling is that until I got the letter from the commissioner, July 2nd, this was the first notice that I had of the reconstruction…. As I look around this room, I see few, if any neighbors, and I’m wondering who else is uninformed. If this were a card game, the deck feels very stacked. I resent that I don’t know more to address here…. I’ve been where I’m at for 23 years, I’m not looking forward to this…. I’m really feeling left out here by the community. We should have been in on the ground floor. Maybe no one else wants to. This comes across as very much we – they. But I’m not seeing the representation of the corridor that will be directly impacted, of which I am one.”