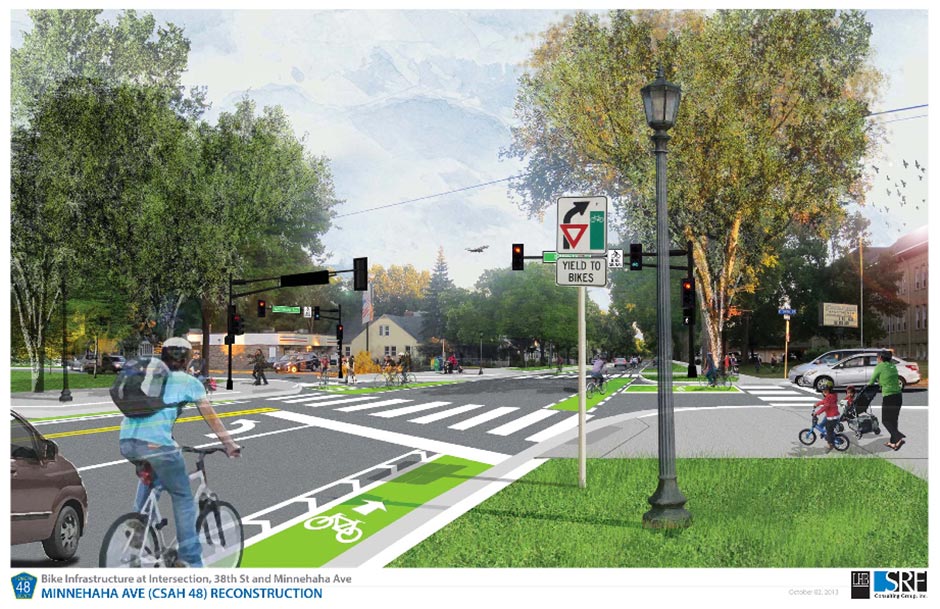 The County’s plans for the Minnehaha Avenue reconstruction, slated to begin in 2015, has passed through the Transportation and Public Works Committee and is now moving on to the City Council. The plans would install a buffered bike lane on the roadway, which would provide a 1.5 foot buffer between vehicle traffic and cyclists as well as shorter pedestrian crossings.

The Committee had previously postponed approval of the plans, calling for further review of options that would allow for a cycle track to be installed at a later date. After meetings of County and City staff, the County decided to keep the original design recommendation.

Council member Lilligren noted that he was “reluctantly supporting” the County’s plans, due in large part to a letter from three leaders of bicycling advocacy organizations that, after many meetings with the County, supported the approval of the plans.

While Council member Gary Schiff praised the work of Hennepin County, noting that its work with local businesses will increase green space and make intersections – especially at Lake Street and 31st – safer, other Council members were more critical.

One of the primary criticisms of the County throughout the design process has been a lack of community engagement. Lilligren mentioned that he would like to see the County have increased conversations with the community about road projects. He added, “I would urge those that remain on this Committee and on this Council and those who fill these seats after us to… really press our partners like Hennepin County to come out with plans like this early.”

Colvin Roy added, “We’re challenging engineers to create corridors that are more complicated than ‘how do we move the most cars the fastest,’ which was the prevailing goal set for them for many years. And now we’re challenging them…to make room for bicyclists as a growing transportation mode and to make pedestrian realm much safer and much more attractive and it isn’t simple.”

The plans will go to the City Council for approval. Final design will be done between now and fall of 2014. Colvin Roy stated, “It is this committee’s expectation that in the next phase of this project Hennepin County will continue to engage city engineers and this community for finalizing the details of the on-street bike lane and choose materials and a design that will go as far as possible toward making bike riders feel safer.”