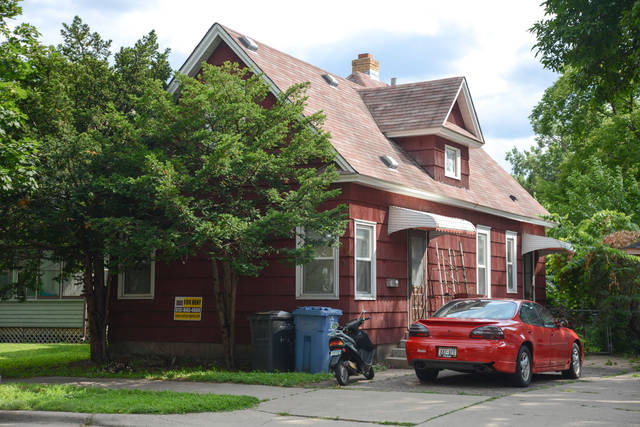 (Photo by Holly Peterson) Richard Eischens recently had conditions placed on his rental license because of unpermitted work and code violations on his 8th Street Southeast property, pictured here on Monday afternoon.

And unpermitted renovations and illegal occupancy in a CPM-managed property on Eighth Street Southeast recently forced the city to make use of the policy.

Since 2013, the ordinance has allowed housing inspectors to dictate conditions of a new rental agreement if a landlord doesn’t comply with city code — which is the case for some properties in University of Minnesota neighborhoods.

At least 27 rental license holders in the Southeast Como and Marcy-Holmes neighborhoods currently have issues of illegal occupancy or conditions placed on their licenses, according to city data. JoAnn Velde, deputy director of the city’s housing inspection, said that number is on the rise.

When violations crop up, housing inspectors meet with rental property owners to hammer out conditions to alleviate the problems. The city has the authority to impose those conditions, even if a property owner doesn’t agree to them, Velde said.

“We can enter into an agreed-upon set of conditions with an owner, and if they fail to [comply], we go directly to revocation,” she said, adding that the city hasn’t revoked any rental licenses for those reasons.

“Most owners are very cooperative because they know the evidence is clear and their chances of winning [in a hearing] are very slim,” she said.

But owners can appeal the conditions in a formal hearing — like in the case with the 1208 SE Eighth St. property, which has had 34 housing violations since 2013, according to inspection documents.

The property, owned by Richard Eischens, has a history of unpermitted work and illegal occupancy, according to inspection records that also found illegal wiring, low ceilings and unpermitted renovation of the basement into bedrooms.

At a committee meeting July 22, representatives voted to fine Eischens and CPM property managers Daniel Oberpriller and David Dosse $1,500 and make them provide copies of new leases to the city.

The owner and property managers are also now required to send photographs of the illegal bedrooms to ensure no one is living in them.

If they don’t follow these stipulations, the city may revoke the property’s rental dwelling license, Velde said, and the tenants of the home would have to move out.

Jeremy Olson, a University student who lives at the property, said he didn’t know the basement’s renovation was illegal.

“We had moved in September,” he said. “A lot of the work was done over the previous summer, so we didn’t know about it.”

Velde said the city will continue to monitor and inspect the property, noting that the parties involved have been in compliance so far with the “pretty tough conditions” placed on them.

Oberpriller, CPM’s president, said while he felt the city excessively inspected the property, he understands the underlying reason for enforcing conditions.

“We had a ceiling that was [6 feet 11 inches] instead of 7 feet,” he said. “But I can’t allow owners to go in there and do unpermitted work.”

Bill Dane, an attorney with University Student Legal Services, said the city wasn’t tough on landlords until recently, so unpermitted work and illegal occupancy have sometimes slipped by.

“Students don’t care if there’s new bedrooms being built illegally, because often they’re the newer and better rooms,” he said.

Dane said he hopes Minneapolis’ new approach will help crack down on landlords who don’t keep up with city housing standards.

“If you drive around those neighborhoods, it’s not hard to spot illegal work or egress windows or things like that,” he said.

Dane, who mostly handles housing cases, said it’s a good idea for students with landlord complaints to make use of USLS, which can help them pursue their complaints in court.

“It’s a win-win for the city and tenants,” she said.