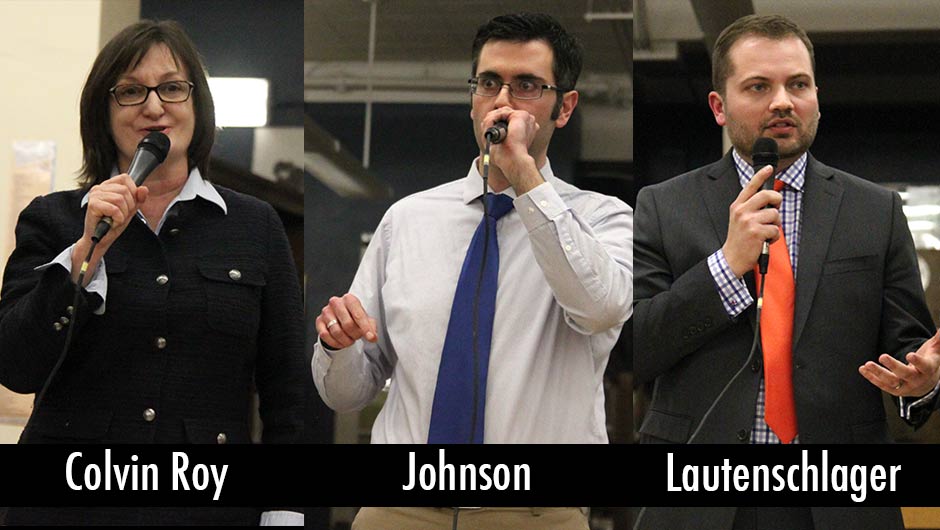 The Ward 12 City Council Candidate Forum packed the media room at Roosevelt High School last week. People were interested to hear 15-year incumbent Sandy Colvin Roy and challenger Andrew Johnson debate local issues. Both candidates are competing for the DFL’s endorsement. A surprise addition to the event was Chris Lautenschlager, a candidate hoping to capture the endorsement of the Green Party.

For many of the questions, candidates generally agreed with each other. What set them apart was their personalities and approach. The closing statements shine a light on each person’s unique perspective.

“I have already demonstrated that I am able to take a big picture vision…[and]…bring it to fruition through a lot of community conversations, through partnerships. It takes some experience to take ideas and make them into reality. How I make decisions is one of the reasons why I think you should support me. I do not have an automatic answer to most questions because I really want facts and then I really want to have a discussion with the people who will be most impacted. And that’s how I work.”

“You know, I’m a young guy, and that gives me a healthy impatience. I do not want to wait another 16 years to see something get done. I don’t want to wait ten years to see the Hiawatha lights get re-timed, I think we could have done it in a year or two. I don’t want to wait to see us go through our outdated, antiquated ordinances and help our small businesses. I don’t want to see us wait any longer to streamline the interactions for the small businesses in our city. I think we can do these things now. I’m ready to tackle them. I’m energized, I’m ready to go, but don’t think I don’t have the experience to do it.”

“I know that most of you didn’t know that I was coming to this party…. I’m just a dude who’s a dad who lives in south Minneapolis. I have two kids that mean the world to me and I want to see Ward 12 be successful for them. We can talk ad infinitum about urban agriculture, or energy options, or about transit, and I can do all of those things, but ultimately I just want to be sure that the issues that I care about stay within this election…. What ultimately is important to me is just the issues. It may seem unlikely that a Green Party member will win in Ward 12, but I just want to make sure that the issues stay on focus and that we can have a selection of choices when it comes to November 5th.” 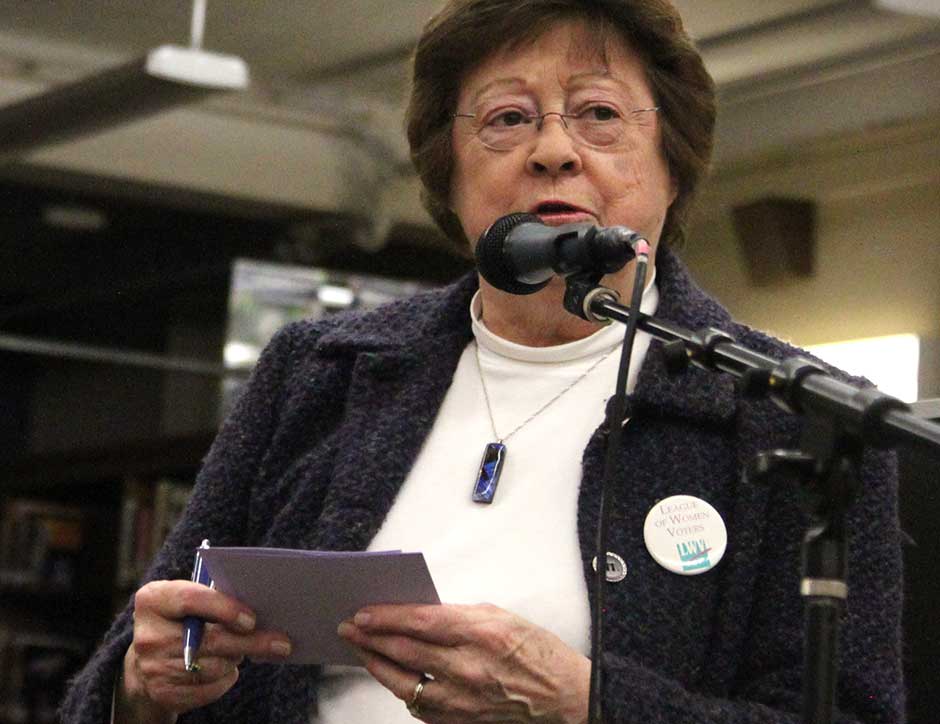 Moderator Maryann Hall from the League of Women Voters presided over the forum.

Discussing the Issues: The Heart of the Forum

A question about the Vikings stadium and how the candidates would each deal with similar deals in the future was asked. This is where the candidates split, understandably enough.

Colvin Roy defended her vote for the Vikings Stadium stating, “I looked at the money and the language of the City Charter, and the City Charter says if you spend more than $10 million city dollars, you need to send it to a referendum. It was a tough choice, it was not ignoring our City Charter. That’s not city money. Sales tax is collected every day in every business and sent to St. Paul always. And in St. Paul the legislature decides where it can be spent. So downtown what we have done is repurposed the sales tax. It’s not a new sales tax, it’s a repurposed sales tax, that will, it’s true, be collected for many years to come and all of the excess above it…. We will be getting help to pay for our roads and our sewer pipes from that sales tax.”

Both Johnson and Lautenschlager emphasized their belief that the stadium was a bad deal.

Lautenschlager commented, “I believe that the relief that that has given us supposedly is not warranted for the incredible sales tax that we’re going to be locked into for the next 30 years. I believe that Minneapolis didn’t get the best deal out of this.”

Johnson said, “It cost $890 million to the City of Minneapolis, that’s the current projection, and there’s a lot of issues with it. But I put all of that aside, because there’s only one issue here, and that is that in 1997 after we paid for our last stadium, the voters passed a referendum capping funding by the City Council at $10 million and said that if you want to put more down on a stadium it has to go on to the ballot for voters. That is in the City Charter, my opponent took an oath of office to honor the City Charter and to uphold that, and the State of Minnesota passed a law saying you can ignore that. It doesn’t matter if it was legal to do, it was wrong. It took away our right to vote it violated the spirit of what voters intended to do, and as a result it is the largest corporate welfare give-away in the history of Minneapolis and Minnesota….”

A glance outside one of the large media room’s windows during the forum revealed large fluffy flakes falling from the sky. Appropriately enough, an attendee asked the candidates how the city should address climate change.

Colvin Roy answered first, “What I have done is at the federal level lobbied through a national organization for an energy efficiency block grant program, and that was funded when the Obama administration put up stimulus money….” She also mentioned that she believed that decisions about Minneapolis’ drinking water needed to be made, and she talked about the increased importance of storm water management. “Storm water management is going to be the biggest first impact here in Minneapolis from climate change. We have a pipes system underneath us that is set for the climate that we’ve been having for the last century.”

Johnson said, “The number one thing I think we can do is go with municipal energy…. I think a lot of candidates out there they say, ‘Oh, its an interesting idea, I think we should explore it,’ and I think that noncommittal language doesn’t do us any favors. I think we need to take a strong stance on this…. “What this [municipal energy] allows us to do is spark a solar renaissance within Minneapolis, and it allows solar panel lessors to come in, pay for everything upfront on your home, and then lower your energy bill by let’s say $50 per month and then charge you $30 per month for those solar panels. So your energy bill will be lower, and you’ll be contributing to renewable, clean resources within the city.”

Lautenschlager agreed with Andrew, stating, “I believe [municipal energy] helps us keep our energy more clean, more local, more affordable, more reliable, and I think that is the path we need to go down in the future, because by municipalizing our power we have more of a local economy support as well as we’ll be able to keep our money here….” 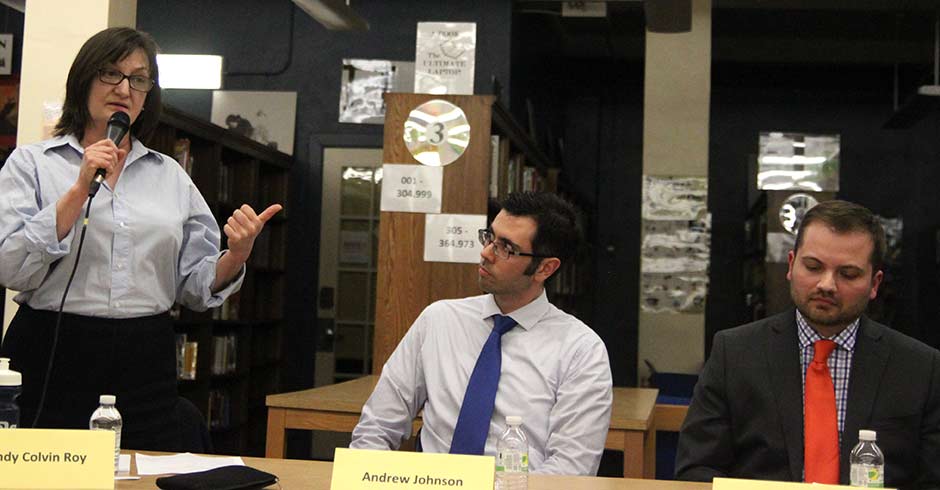 One participant asked, what exactly does zero waste mean and how do we get there.

Johnson responded, “I think we are definitely on the right track…. There’s a lot of opportunities though.” His ideas included expanding organic composting, trying a decentralized composting project, and sourcing renewable resources for building materials. He also brought up HERC, the Minneapolis incinerator, “…two-thirds of the waste there is recyclable material, and [it] is producing all sorts of fumes and toxins that are going into the air which is resulting in increased rates of childhood asthma and also higher levels of lead in children’s blood…. Normally we think of waste going into the ground, but we’re putting it into the air and are suffering the health consequences as a result.”

Colvin Roy answered, “Staff are studying composting right now, and Andrew mentioned a couple of the possibilities.” She added, “We need to consider the cost environmentally of driving all of the vehicles that are going to haul something somewhere.” She also brought up the idea of product responsibility, the idea that companies are responsible for disposing of the products they sell. She explained, “…the theory is they will consider all of the packaging they are putting in or all of the materials, all of the heavy metals they’re putting in their products and that could make a huge change to the amount of waste we have to deal with.”

Lautenschlager responded, “I think that one thing we need to do before talking about zero waste is ban all plastic bags….” He also agreed with the need for organic composting and reducing the amount of paper and organic material that is incinerated. He disagreed with Colvin Roy on one point, commenting that if communities can get closer to zero waste, there may not be as much garbage to be picked up, and it could be reduced to every other week. 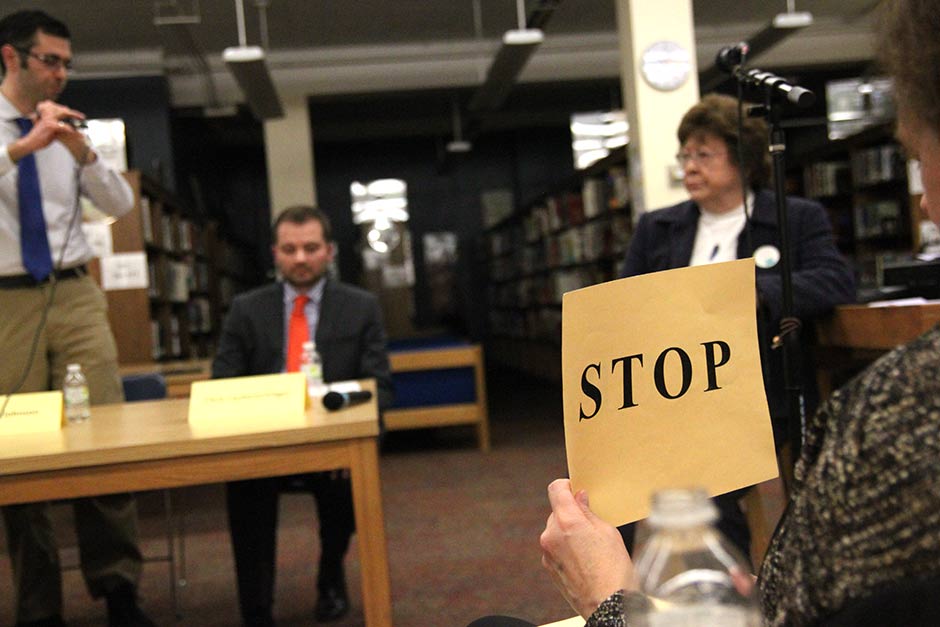 Candidates had one minute to answer each question. Questions were submitted by members of the audience.

Learn More About the Candidates

Currently, there are no additional forums scheduled for Ward 12, but we will add them to the calendar if they pop up. You can learn more about the candidates by checking out their websites. We’ve also invited all candidates to participate in a Q&A, and at this point have received Johnson’s answers.

If you’re a political junkie and can’t get enough of the 12th Ward City Council race, we thought you might like to check out our very raw transcripts from the forum. Please keep in mind that parts of the transcripts were abbreviated, and it is a completely unedited document. We wanted to make the extra content available for people who were interested. Without further ado, here’s the raw transcript of the Ward 12 Forum (PDF).