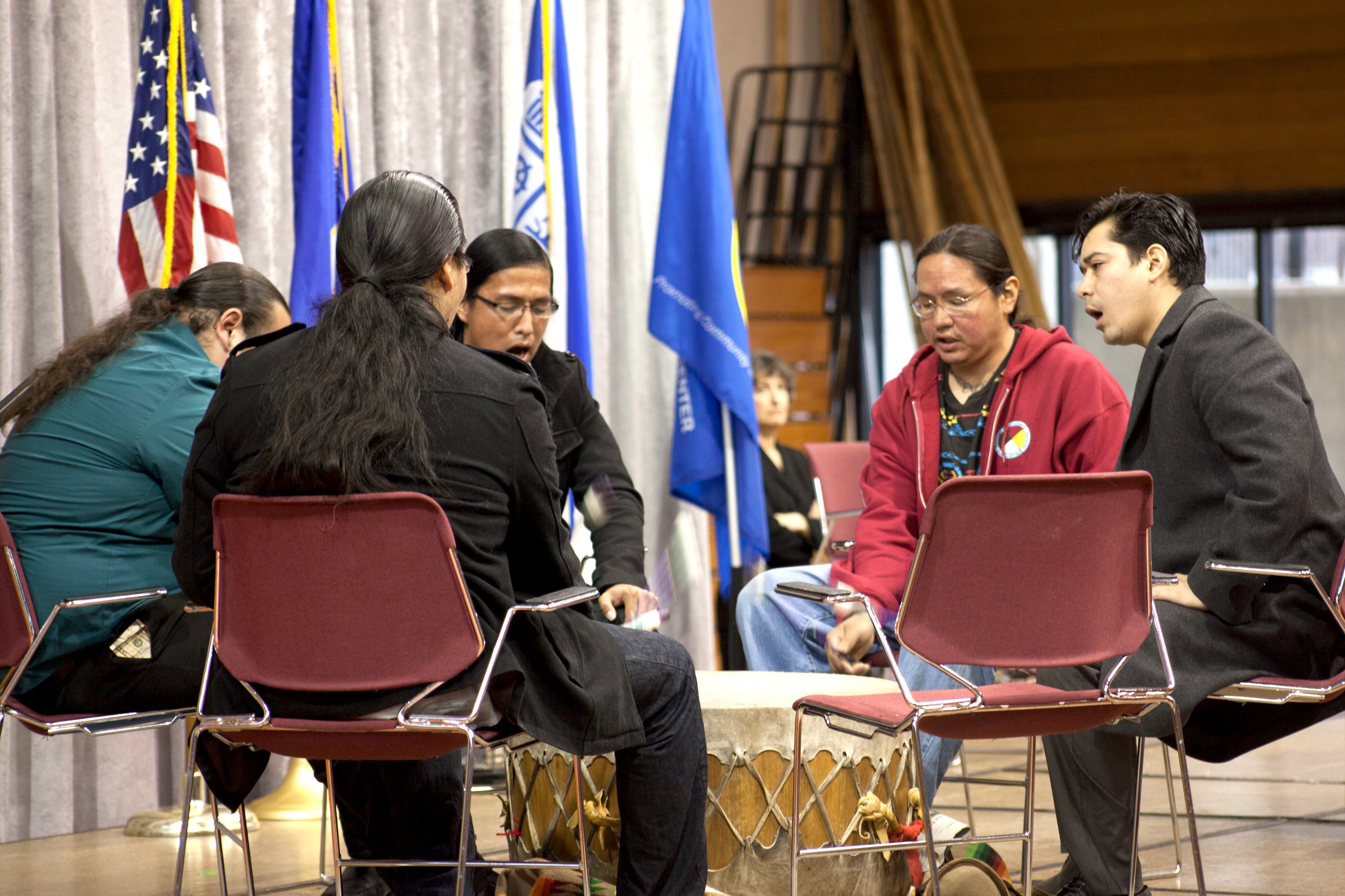 For the first time in the history of the city, Mayor Betsy Hodges selected the Minneapolis American Indian Center as the site of her State of the City address on April 24. Drum group Ringing Shield performed at the opening of the speech. Daniel Yang, Director of Organizing and Community Building at the Native American Community Development Institute, and Bill Means, co-founder of the International Indian Treaty Council, introduced the mayor.

Yang commended Hodges for continuing to engage the Native community in discussions about citywide issues. “The hard truth is, more often than not, like in so many communities of color, we don’t see those who ask for our votes again until four to six years later when the next election rolls around,” he said.

Yang also spoke on the importance of the Minneapolis city council’s vote on the Indigenous People’s Day Resolution, which would be recognized in place of Columbus Day. “If it’s important for the City of Minneapolis to have all of its residents feel respected, dignified, and valued, this is an important step in healing the pain that is associated with this day and the Indigenous people that call this place home,” he said.

Many other leaders in the Native community feel that the State of the City address marks an important step in bringing Indigenous issues into discussions about citywide policies. Bill Ziegler, Chief Executive Officer of Little Earth of United Tribes, said that the speech shows solidarity between the issues faced in the Native community and Minneapolis as a whole.

“I think the significance of this event happening here at the Indian Center on Franklin Avenue is a way for the mayor’s office to say and show the American Indian community that our issues are also issues that face the rest of the city and that we’re going to be given the respect to have our voices at the table and be taken seriously,” he said. “I’m hopeful through Mayor Hodges’ leadership that this isn’t just a show, that as she goes throughout her term our issues will remain at the forefront of the work that she does.”

Christine McDonald, the American Indian Community Specialist with the City of Minneapolis, said the move represents the city’s acknowledgment of the issues members of the Native American community face.

“Being an employee of the City of Minneapolis, I constantly felt that I was an interrupter. Whenever we speak about information and data about our city, about our population, a lot of times it didn’t reflect our community. And the response I would get is that our numbers weren’t big enough for the data to show up and I would push back and say that that doesn’t mean that we’re not relevant,” she said. “It’s about representation, it’s about acknowledgment, it’s definitely about equity. So many people have a romanticized version of Native Americans and they forget that we’re still here. They don’t realize that when it comes to all of the gaps, we have the biggest gaps.”

“It goes along with them bringing all the candidates to the community through the process and solidifies their understanding that the American Indian community is strong and well and needs to be recognized,” Goze said.

Ashley Fairbanks,Ward 9 Policy Aide, thinks that Hodges showed recognition for the Native community and its issues that few mayors have exhibited. “It’s so important to immediately reengage and she’s here to talk to our community,” she said. “Just being here is acknowledging the existence of our community and the cultural corridor, which is more than most mayors have done in the past. “

“The history of Native peoples needs to be recognized in order to establish a relationship with the community and to recognize urban Natives here,” he said. “It’s an effort that should be implemented in other states as well in order to effectively address the needs of Native youth in education systems, but also to give the youth a place in the community to learn more about who they are within these institutions. There’s a deep need for it and it fits the aspirations of Native communities.”

Thorne LaPointe, also of Ringing Shield, identified with the mayor’s asset-based approach. “She really pointed out the leaders and the shakers and movers in the community who are thinking ahead for a sustainable future at all sectors and all levels. It helps us think anew; about our current situations, our current circumstances and how we can make it better,” he said. “I really see her shifting the focus from the problems to our strengths and our number one assets. I really liked her approach in finding common ground and speaking in terms of that.”

Hodges’ speech focused on themes of equity and economic growth.

Hodges noted a study released by the International Monetary Fund that shows that countries who reduce inequalities among their populations by 10 percent experience an economic growth of 50 percent. She noted that important aspects of this equity include education, access to public transit, job growth and support for small business owners from all backgrounds.

“The key to our future rests on making sure that everyone has what they need to take advantage of all we have to offer. Our common future rests on it,” Hodges said. “We are one Minneapolis, my friends. Acting like it will get us everywhere we choose to go.”