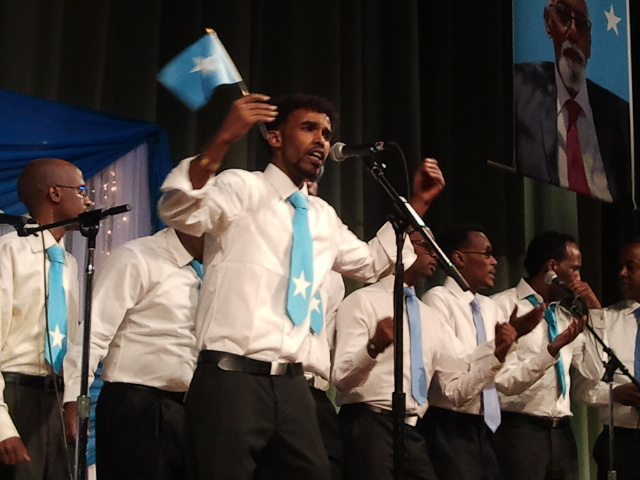 Updated, 9/25: When nearly a thousand Minnesota Somalis gathered at the Minneapolis Convention Center September 22 in celebration of their newly elected president and parliament speaker, three things were prevalent: blue, white and music.

The blue and white colors, which comprise the Somali flag, adorned the auditorium, while Somali singers and musicians entertained the audience and commented on current social issues in Somalia through their song lyrics.

About a dozen of Minnesota’s finest Somali singers took the stage to convey a message of hope as they inspired the audience to stay positive and hopeful about the country’s conditions, despite the 22 years of turmoil.

“This president is unlike others who held office in the past,” said Abdikadir Elmi, a Somali community member who was a student of President Mohamud seven years ago when he studied at Simad University in Mogadishu. “He can bring stability to the country. He’s well-educated, innovative and honest.”

For Elmi, the event had a personal connection. It wasn’t just a celebration for a new Somali president, but rather a celebration of the success of a teacher and mentor. 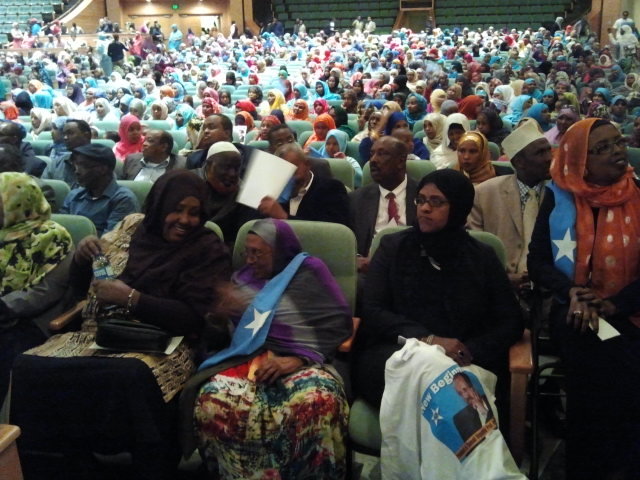 Nearly a thousand Minnesota Somalis gathered to celebrate the election.

In a secret ballot two weeks ago, political newcomer Mohamud unexpectedly won the election against outgoing President Sheik Sharif Sheik Ahmed by the legislative vote of 190 to 70.

“I urge you to stand up and support the president,” Sheikh Abdirahman Sharif, Imam of Masjid Darul Hijra of Minneapolis, told the people at the event. “And we ask him to share his visions and plans for the government with us. What are his goals for the next six months, the next two years, and next four years? We want him to tell us these things.”

Speaking via speaker phone from Mogadishu, President Mohamud thanked the community for their support and willingness to contribute positively to the country.

“I want you to know that the great asset of Somalia is in Minnesota,” he said speaking of the Somali community here.

U.S. Sen. Amy Klobuchar (D-MN) sent a representative to the event with a letter promising the community that she would push the White House to work with the new administration in Somalia and to help bring the country’s turmoil to an end.

Many expected the president to speak of the current situation of the country and what his plans for the country include, but he didn’t touch on these.

“It was good to hear the president talk,” said Hafsa Salah of Minneapolis, “but I was interested to hear more about what the issues with the country are and what he’s going to do to right the wrongs.”

Correction 9/25: Date of event was 9/22, and President Mohamud is expected to appoint a prime minister within two weeks.