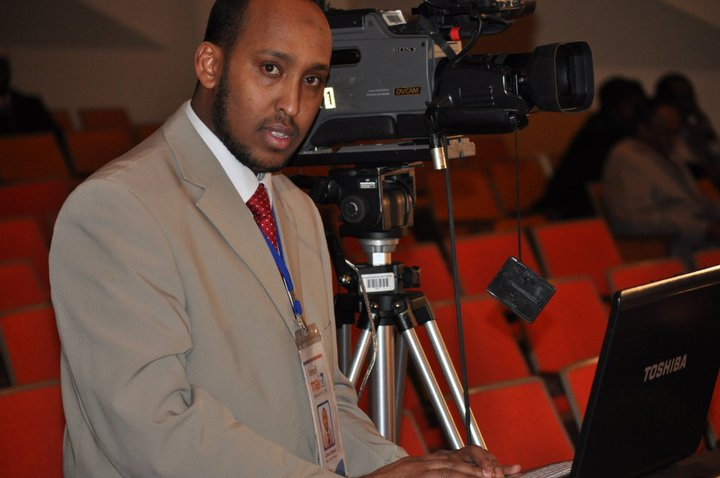 A well-known face to Somali television viewers in Minnesota, Liban Hussein brings the community news stories unfolding both in the Twin Cities and in the war-torn Somalia he fled decades ago.

“That’s what you do when you do what you’re passionate about [an opportunity],” said 46-year-old Hussein of the programs he produces. “It’s important to inform people about what’s going on in their communities.”

Before he escaped Somalia’s 1991 civil war, Hussein loved to watch television reporters and anchormen presenting news and other programs. He didn’t know of schools he could attend in Somalia for broadcast journalism training. Hussein waited for an opportunity from radio or television stations there, but to no avail.

In 1999, Hussein arrived in Maryland en route from a refugee camp in Kenya. He spoke no English. He wanted to work in order to assist his parents and siblings in Somalia. He wanted to understand the culture and language of his new home. But most importantly, he wanted to pursue his passion: broadcast journalism.

Hussein started out establishing new life in the same way many adult immigrants do: he turned to a meatpacking factory in Hartley, Iowa, for income. When one of his networks told him about job opportunities at Beef Specialists of Iowa, Hussein immediately traveled more than 800 miles by bus to Hartley, securing a meat slicer position that paid $8.50 per hour.

“I trimmed meat under intense pressure,” he said. “The place was really cold,” and he had to wear apron, steel-capped shoes and arm-guards for protection against the large knives and cleavers he operated. (Jobs at meatpacking industries are some of the most dangerous in the United States, according to a 2012 report by the Midwest Coalition for Human Rights.)

In 2000, Hussein moved to Minnesota for a medical assembly job at Emerson Processing Management in Eden Prairie, where he spent six years.

As Hussein worked at Emerson, he managed to financially assist his parents and siblings in Somalia, get married and start his own family in Minnesota, and attend Minneapolis Community and Technical College. His English language skills improved drastically while at school, even though he later dropped out.

“He’s a hard worker,” said Doug Cain, the checkout manager and instructor at MTN who trained Hussein. “He’s gotten certified in just about everything we have.”

Hussein brings various voices to the homes of thousands of Minneapolis Somali residents. His shows include interviews of local people and discussions with community members tackling issues of concern to Twin Cities Somalis.

“Somali elders often stop me when I’m in their neighborhood and ask me how my kids and I are doing, like we’re friends” Hussein said. “That’s because I became part of their everyday life. It’s like I’m at home with them.”

“It’s important to have communities that will be able to express themselves,” Cain said, “and also to connect to people who might otherwise be isolated by language or other boundaries.”

Hussein has dedicated his time to doing just that, and some of the Somali community members praised him for the work.

“[Like other Somali TV presenters], Liban is passionate about media and serving for the community,” said Abdirahman Kahin, owner and manager of Afro Deli and Coffee in Minneapolis. “Many people think — they don’t know that these guys spend their free time serving for us. … They think they do it for other personal reasons.”

After more than two decades in exile, Hussein returned last fall to Somalia to visit his parents and 11 siblings — he’s the eldest in his family. He also wanted to meet officials of Somalia’s new government in Mogadishu.

Since Hussein used to contribute news productions about Minnesota Somalis to the government-run media, he wasn’t a stranger to the plight of many people in the Mogadishu administration and people close to officials.

Hussein said it was the perfect time for him to be in Mogadishu because the government media was starting to expand its operations and global news coverage to audiences in North America.

“Since I’m a Somali journalist in Minnesota, I was the best fit for the position,” he said. So, the Somalia Ministry of Information and Post and Telecommunications appointed him to head operations and services of Somali National Television (SNTV) and Radio Mogadishu in North America.

Hussein said the new position is a sign of his long-awaited dream unfolding into reality. Producing without a paycheck for about a decade wasn’t easy, he said. But it was a way to sharpen his skills and build credibility as a journalist.

It’s upped the ante, too.

“I was limited to the Minneapolis Somali community,” Hussein said. “Now, my work can be seen all over the world.”

IT assistant by day, journalist by night

The Somali government is fairly new and still scrambles to stand on its own feet. That means Hussein has to do the new job voluntarily.

In order to put food on the table for his wife, five children, and his parents and siblings in Somalia, Hussein works at Higher Ground Academy, a public charter school in St. Paul, as an information technology assistant. He’s been with the school since 2007, providing assistance in media production and technology.

On the weekends and at night, Hussein is often on the road with recording equipment. He produces several programs on the Somali Minnesota community and files them to SNTV’s Mogadishu headquarters. And he continues producing his weekly “Mia TV” show.

For the most part, Hussein serves as the cameraman, editor and presenter of the programs he releases.

Hussein plans to establish a large SNTV studio in Minneapolis, which will function as the center of program production in North America. He’s working on a fundraising event to raise money to rent a space and buy equipment for the studio.

“This is going to be a great project, a bridge that connects between Somalia and the Somali diaspora in North America,” Hussein said. “I ask that Minnesota communities and the Somali government support the project.”