Streetcars: They’re hot right now. However, in Minneapolis, in 2014, in the places they are proposed, they are also probably not a good idea. Or at least, they are certainly not a good use of hundreds of millions of dollars in transit funding that’s already too scarce and ill-budgeted.

Will Not Improve Mobility

The specifics will vary from city to city and project to project, but at its core, the entire concept of a “modern streetcar” is to trick middle class people into getting on board with local route bus-quality transit service. Again, the specifics will vary, but that will generally be the case.

The starter streetcar proposal for Nicollet and Central Avenues in Minneapolis, budgeted in the neighborhood of $200 million dollars and recently fleshed out quite a bit (pdf), has single streetcar vehicles mixed in with traffic stopping every couple blocks. The project page notes that the streetcars will have 7.5 minute peak headways. The vehicles will be a bit larger than the articulated buses Metro Transit uses on its busier routes. The streetcar does not fully replace local bus service, and the Route 10, 11, 17, and 25 will presumably still travel along Nicollet Mall, and I would reckon the 18 will as well (forcing a transfer at Lake Street would be dumb, but I didn’t go to grad school). In any case, the streetcar will regularly be bunched up behind several buses on Nicollet Mall, to say nothing of cars and snow and other obstacles elsewhere on the route. 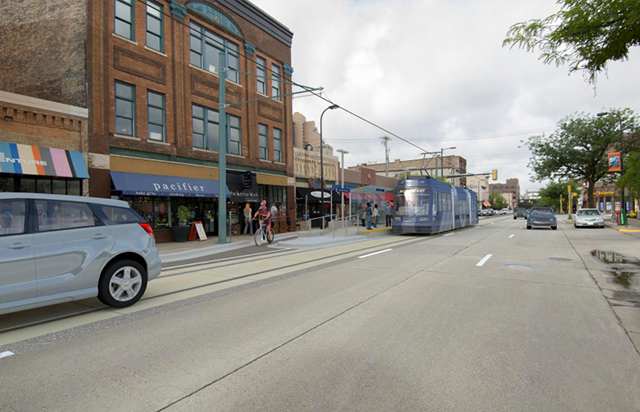 Hundreds of millions of dollars to be held up behind this Toyota Matrix (Source: City of Minneapolis)

What’s funny is that people appear to realize that streetcars aren’t a significant mobility improvement over existing buses, and so they’ve been sold as, at best, a real estate development tool, and at worst, a tinker toy for our fairly minimal tourist population. The thing, though, is that no one is learning the lesson of the past ten years, where we’ve had very high quality transit service with the Blue Line, and a pretty insignificant amount of transit oriented development has actually occurred. There have been a couple projects, one with “station” in the name even, but there are still surface parking lots and literal open fields adjacent to many stations. The area around Lake Street Station hasn’t taken off, there’s a giant surface parking lot on Hennepin Avenue next to the Warehouse District Station, and it took a decade to put something a little underwhelming on the parking lot next to the Nicollet Mall Station, which is probably the exact spot on the graph where the “transit accessible” and “high value downtown real estate” lines intersect.

An excellent case study: 3A vs. 3C on the Southwest Corridor! (*ducks*) In 2009, we opted to skip Uptown when plotting out our actual transit mobility improvements, and you know what’s happened since 2009? The area along the Midtown Greenway through Uptown has exploded with new development! Thousands of new units, without any transit improvements. 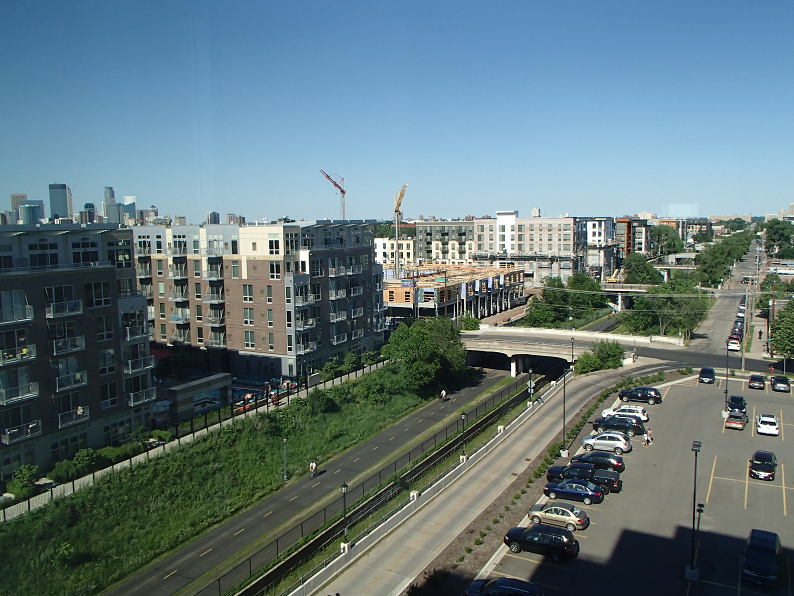 New residential development along the Midtown Greenway in June 2014

The thing is, in the Twin Cities, it’s not actually that hard or expensive to drive. People complain, because people complain about everything, but I was in DC a couple weekends ago, and it took two hours by car to get to Reagan on a Sunday afternoon. By and large, people who can afford newly-constructed housing in the Twin Cities are going to want to have a car, and as such, transit accessibility isn’t all that important. Which isn’t to say that we should be planning to accommodate that, but we also shouldn’t be building an transit project entirely because of rail bias–which is what this is, and it’s kind of the same idea. “People don’t want to take the bus, so we’ll replace the bus with an expensive streetcar that essentially replicates the same service.”

And on rail bias, hey, I take transit in the Nicollet-Central corridor everyday, and it is seldom fun. It is at capacity during rush hour. In the back of the bus, there are chickens clucking and babies crying and me sweating and people with the fingers cut off their gloves huddled around barrels with trash fires in them. Out the window, you can see SouthWest Transit buses, two-thirds full, speeding towards Eden Prairie. Even in the morning, and I work pretty early, it’s standing room only; in the afternoon it’s a giant mass of humanity and baby strollers and heightened emotions.

…so what happens when we put a streetcar there, and suddenly it’s attractive to Target employees who live in those hypothetical TOD apartments at Lake and Nicollet? It will be at its functional capacity the day it opens. We will have added yet another line on our map–though this one will probably be thinner than the Blue and Green Lines (maybe even dotted?)–but we will have not improved transit service for actual transit users.

Most (71%) of Metro Transit’s budget goes towards paying its employees to do things, and about half of their 3,000 employees are bus drivers. I usually like to throw around capital costs (hundreds of millions of dollars!) to make points, but it’s also worth pointing out that, per rider, streetcars are more expensive to operate than the next couple higher rungs of transit service.

Each mode and configuration has one driver. Streetcar is spelled incorrectly. (Source: City of Minneapolis)

Somewhere in there, there’s an overall system argument to be made about operating costs and fiscal responsibility.

The whole business with the fantasy maps and what ifs has certainly gotten old, but in this case, we’re putting $200 million dollars of shiny bus on top of what really ought to be the north-south transit spine of our growing city. Someone, somewhere, heard about streetcars and that Portland was doing them, and so now we have to also do them. But we don’t! We can do better, actually! This plan is very 1999, but it is 2014, and it will be 2029 very quickly. Tens of thousands of people have moved into Minneapolis since someone first wondered aloud “what about doing streetcars?” and slapped it on Nicollet Avenue. Tens of thousands more Minneapolitans are on their way. I, for one, would pay a 1% sales tax to fund real, live transit; I would probably pay a 5% sales tax for it. That’s on top of the extra sales taxes I pay, as a downtown resident, to support regional amenities downtown. I would probably volunteer to spend hours with a shovel digging a tunnel under Nicollet or Hennepin Avenues, thereby saving hundreds of dollars on gym memberships.

This lightly-researched argument was stuttered vs. Bill Lindeke’s pro-streetcar argument before a live audience at Rail~Volution last month; I think consensus was that Bill won.