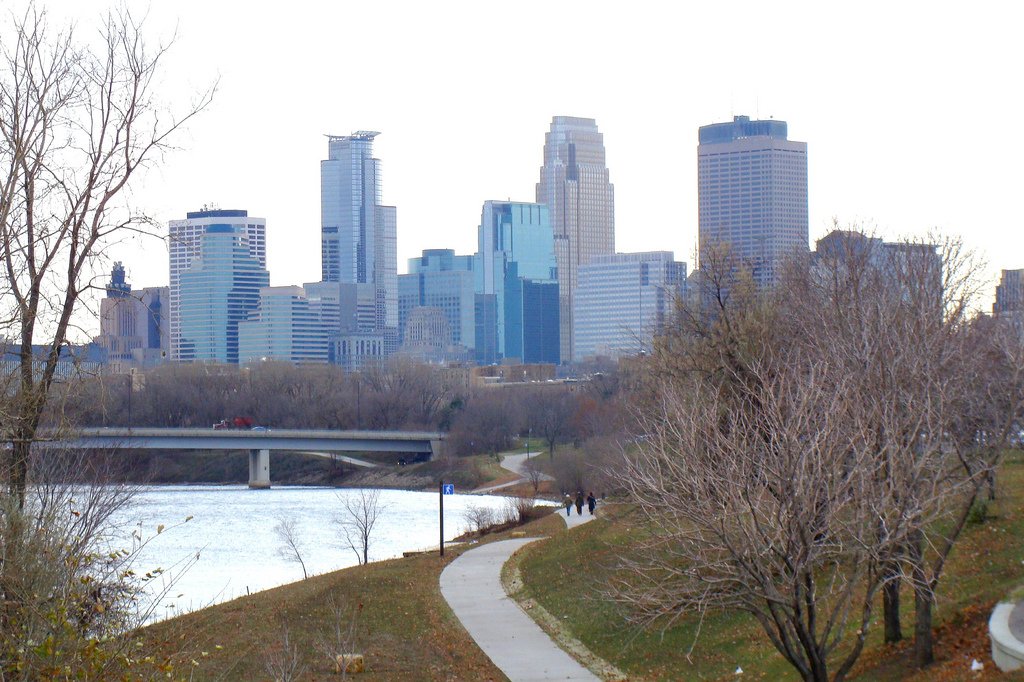 It is hard to overstate the importance of the Mississippi River in the urban form of Minneapolis and Saint Paul. Once a source of energy and an important transport route, the river’s main value now is environmental and aesthetic. With the imminent closing of the Upper locks and the Upper Harbor Terminal–basically the Port of Minneapolis– the city has an incredible opportunity to redevelop 43 acres of riverfront land. More land will be available in the future, and the city has an extensive plan–the Above the Falls Master Plan–for developing the riverfront upriver from the Saint Anthony lock and dam.

The immediate plans for the Upper Harbor Terminal do not take full advantage of the area’s potential. Taken as a whole, the Above the Falls Master Plan has some worthy proposals for parks and trails but the plans for commercial and residential development need re-thinking. It would be a shame for Minneapolis to ignore models of waterfront re-development that have worked here, and in many cities abroad. The Above The Falls Master Plan update has a nice picture of the new Lowry Avenue bridge.

Fundamentally, the problem with the immediate and long-term upper river plans is that they plan for only moderate density, and make little provision for market demand for the area to be higher than plans anticipate. The Above the Falls plan was written in the early 2000s, before the city entered what is now a sustained building boom in Uptown, Downtown, Saint Anthony and around the University of Minnesota. It is highly likely the authors of the plan did not anticipate the strong demand to live in Minneapolis that has been demonstrated in the last few years. Here’s how dated the original plan is: the website warns you that “it may take a long time to download over a modem”. While the city updated the plan in 2013, the plans continue to reflect an outdated approach to urban planning with proscriptive land use and a view that the city can accurately predict what mix of commercial and residential demand will occur in the future. If Minneapolis is to become Transitopolis and reach a population of 500,000 as the mayor hopes, we need to think bigger about our plans for the Upper River.

Good transit or walking connections help sustain demand in Minneapolis’ growing areas, while the upper river area currently has poor transit access. However, much of the upper river area is just 2-3 miles from downtown, making active commuting (walking, biking, running) a possibility for many. While Minneapolis envisions growth to 500,000 along existing transit corridors, the upper riverfront should be another area in which higher density is permitted. The geometry of the area permit cost-effective transit when demand warrants. Buses running down Washington or 2nd on the west bank of the river could serve that area easily, and Marshall performs a similar role on the east bank. The immediate plans for the Upper Harbor Terminal–43 acres on a mile of riverfront land–envision a business park. This oxymoronic phrase gets to the heart of the problem. What the city is proposing is developing prime waterfront land in a low density single-use format. Without any residential development planned on this site, what Minneapolis is proposing is a suburban office development, but with river views. This is a wasted opportunity. Around the world, and in Minneapolis itself, people pay a significant premium to live with water views, and a slightly smaller premium to live near the water. With a mile of developable land along the river, Minneapolis has an incredible opportunity to let thousands of people live near the river if the demand is there. The views of the downtown Minneapolis skyline and the river between the Lowry and Broadway bridges can be stunning. We should let more people live there and enjoy them. Lets recognize the positive elements of the Above the Falls master plan, and what has already been achieved on Minneapolis’ riverfront. The master plan envisages the continuation of existing rivefront trails for biking and walking all the way up the river. These trails can serve as both recreational and transport corridors for cyclists and pedestrians. The trails will be paralleled by a linear park, with the width and flora varying along the way depending upon the flood plain. In this respect, the plan builds on what already exists in parts of the area. But the plan seems to ignore the precedent of St Anthony Main that should be a model for development further up the river.

In the St Anthony Main area, a recreational trail and linear park front the river. Immediately across the road, within 50 yards of the river in some places, there are high density mixed-use buildings. In the past year, several new apartment buildings have been built in the area, bringing more residents and increased vitality. The Above the Falls plan mentions St Anthony Main but does not see it as a precedent. The plan for land use on about 4 miles of riverfront envisages a mix of residential and commercial uses, but separates those uses, sets them further back from the river than has been successful here and elsewhere, and proposes less density.

The success of St Anthony Main is unsurprising. It has the same features as other successful waterfront re-developments in Toronto, Vancouver, Sydney, Wellington, Auckland and London. Those features are public access to the water, a lengthy but narrow trail and park along the water, moderately sized buildings (3-6 stories) immediately beside the park, stepping back to significantly taller (10-30 stories) buildings in the second row of buildings back from the water. Residential development plans Above the Falls could be higher density.

By contrast, the Above the Falls master plan, as pictured above, envisages mostly low-rise buildings and townhome development, in which many people will be near the river but not be able to see it from inside. Despite planning for an extensive linear park it shows residential development buffered by larger setbacks. If implemented it will be a missed opportunity. If people are willing to pay for a view of lakes, they will probably be willing to pay for our more interesting views of the Mississippi River, and the Minneapolis skyline to the south. Lets rethink the plans we have for this area and allow for significantly higher densities than what is proposed.