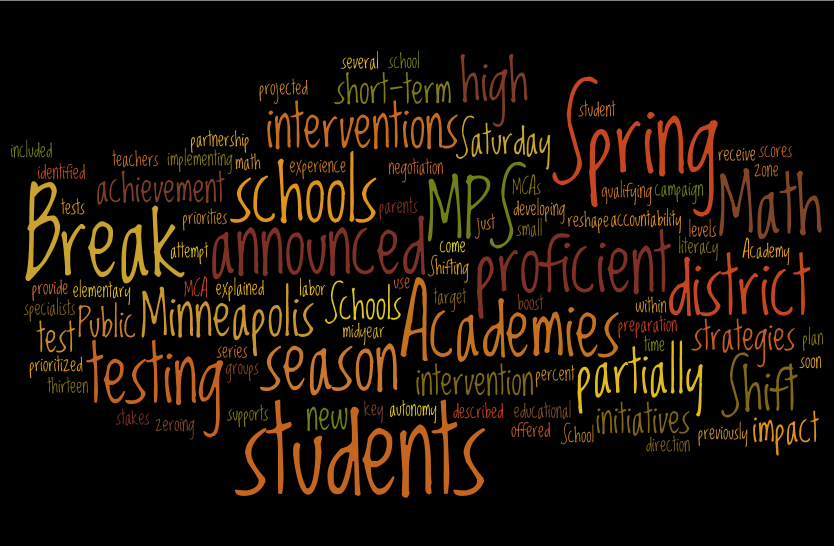 Over the past year, Minneapolis Public Schools have announced a series of new initiatives. This article is the first in a short series describing some of these initiatives, and looking at how they relate to MCA test preparation, and what teachers, parents and the district have to say about the initiatives and the tests.

Last May, Minneapolis Public Schools (MPS) Superintendent Bernadeia Johnson announced that MPS would soon be implementing a “Shift” campaign, designed, according to a press release, to “reshape the educational experience” for all students within the district. The “Shift” was described as “developing a partnership zone for achievement, autonomy and accountability and several key labor negotiation priorities.”

These interventions come just before the high stakes testing season. MPS’s testing calendar indicates that the MCAs will be given to all public school students in grades 3-8 and 10-11 between March 10 and May 17.

If more students show growth in their test scores, or score high enough to be counted as “proficient,” the district, as a whole, will show improvement, as MCA scores are the main accountability tool used to evaluate the success of school districts, as well as teachers and students.

This series is a work in progress, and we welcome your input — questions, comments, and information. MPS had not yet responded to questions by press time, but we look forward to eventually receiving and publishing their responses.