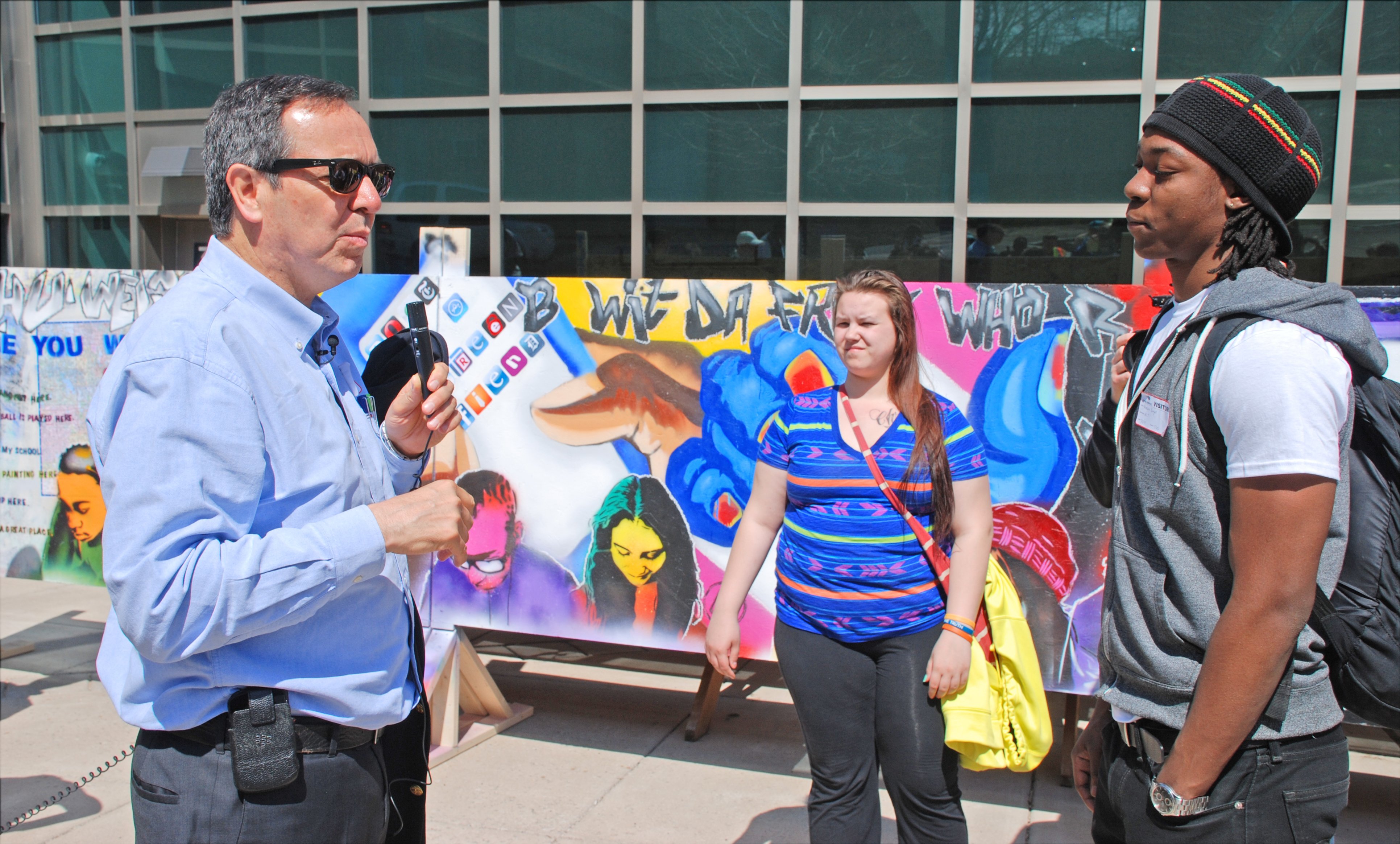 Bicycling magazine didn’t do Minneapolis any favors by listing it as the second most bike-friendly city in the nation behind Portland, Ore., an urban design consultant told a Minneapolis group on May 7.

Gil Penalosa, executive director of the Canadian non-profit group 8-80 Cities, has added the Twin Cities to the more than 150 cities with whom he’s consulted in the last eight years on all continents.

“In Minneapolis, one of the worst things they said is that you were among the best in the nation,” Penalosa said. “It would have been better if they said you were 84th and then you would know how much work you have to do. You have to decide whether you’re satisfied being one of the champions of the little leagues or whether you want to go to the major leagues.”

Minneapolis should compare itself with world-class cities like Copenhagen, Portland, Amsterdam and Melbourne in urban vitality, which he says depends on making the cities friendlier to pedestrians and bicycles. By doing so, “we are creating vibrant cities, healthy communities, sustainable happiness through great parks and streets.”

Penalosa, who gained renown as commissioner of parks and recreation in Bogotá, Columbia, made 17 presentations in his week-long Placemaking Residency in early May sponsored by the Saint Paul Riverfront Corporation and a variety of other nonprofit groups. He discussed how to plan a city for residents from ages 8 through 80 – the purpose of his 8-80 Cities foundation in Toronto.

“Think of the city for an 8-year-old and an 80-year-old, then it would be great for everybody from zero to a hundred. We want cities for all people,” Penalosa said.

He began and ended his week in the Prospect Park neighborhood in Southeast Minneapolis. Going from those mostly white citizens to the ethnically diverse Central High School in St. Paul on May 5, he said, “I felt like I had gone into a different country.” A city should be more integrated, with social interaction across income, ethnic, racial, gender, age and class lines, he said.

Penalosa began his high school presentation at St. Paul Central High School by poking fun at media attention to potholes in the Twin Cities. “Look at St. Paul from the air and you see that the biggest public space is the streets. Are the streets for cars or are the streets for people? … If you build a city for cars, you get more cars. If you build it for people, you get more people.” His visit to Central was hosted by Transforming Central, an effort by parents, students, staff and neighbors “to reshape the urban landscape” of the school.

On a corner north of Central High, he said: “Imagine being a 6–year-old and crossing this intersection or imagine being 80,” he said. “Imagine being in a wheelchair,” added Carol Swenson, executive director of the District Councils Collaborative of St. Paul and Minneapolis, who narrated their walk. “Do you feel safe here?” 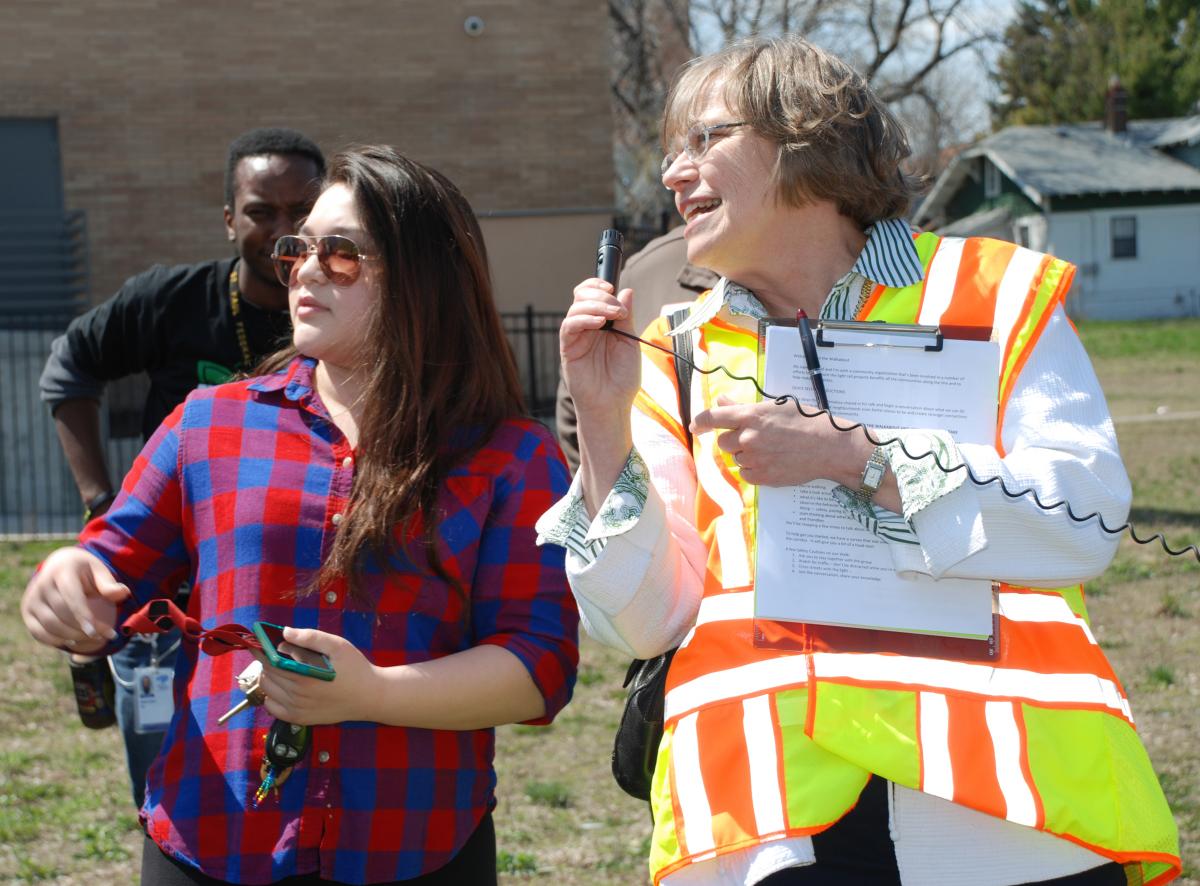 Not so much, said Central student Abigail Larson-Barker, a senior and president of student council, who was hit by a car at the intersection as she walked to school in the crosswalk with a green light. She was not injured, but the accident demonstrated how easily drivers are distracted at the busy intersection near I-94 and Lexington Parkway.

Penalosa said classical music, bicycle parking and public space should replace car parking lots next to schools. Showing a photo of a school lot crowded with bicycles, he said, this bike rack is outside the principal’s window. School buses should park away from the school, giving students an incentive to walk more.

In the United States, 100,000 pedestrians are hit by cars every year; 4,000 of them are killed, he said. In London, he said, all streets that aren’t arterial roads are now 20 mph. “About 12 million people now live in 20 mph communities.”

Showing a slide of people riding bicycles in the rain, some with umbrellas, he said, people worry too much about the weather. “There is no such thing as bad weather; it’s bad clothing.” In the Caribbean, people told him it was too hot to walk and ride bikes outdoors; in the north, folks said it was too cold.

The Twin Cities have planned too much for the few days of bad weather, instead of the many days of good weather, he said, adding that the skyway system sucks vitality off the streets that should encourage people to be out of doors.

For a comprehensive plan to work, the entire metropolitan area needs to work together to make a grid of protected bikeways. “Think of it as a power grid,” he said. “You go to each council. If they want power, water and sewage, you need a flow connecting the whole city.” Maintain it. Plow the snow. “It worked for Calgary, which has more snow than the Twin Cities,” he said. Start with a pilot project for a trial period. “Then if it doesn’t work, we can get rid of it.”

The key to getting people to use bike lanes is to physically separate them from the cars, not just with painted lines on the street. Penalosa showed a slide with bicycles moving on a separate road faster than cars on an adjacent clogged street in his hometown of Toronto. “Imagine if each one of these cyclists were in a car,” he said.

Transit stops and bikeways should have coffee shops, flowers, rest rooms, and places for people to sit and play chess.

Forget sharing the road, he said. A pedestrian-centered intersection should keep 80-year-olds safe from passing cars. “They’re told to ‘negotiate’ the intersection,” he said. “I don’t want my mother negotiating with a two-ton car,” he said, worrying about “the one time she loses.”

He showed the exterior of a 24-hour fitness center that illustrates the problem of modern civilization. The photo showed people riding an outdoor escalator up a few stairs to go inside a 24-hour fitness center where they pay a monthly fee. “What do they do when they go inside? They run up and down stairs.” Indicating the stairs next to the escalator, he said, “Here they could run up and down the stairs for free.”

The placemaking residency is about the built environment, doing the hard work to create places where human beings are going to be happier and healthier, he said.

Urban design consultant Gil Penalosa questioned whether parking lots should be near schools.