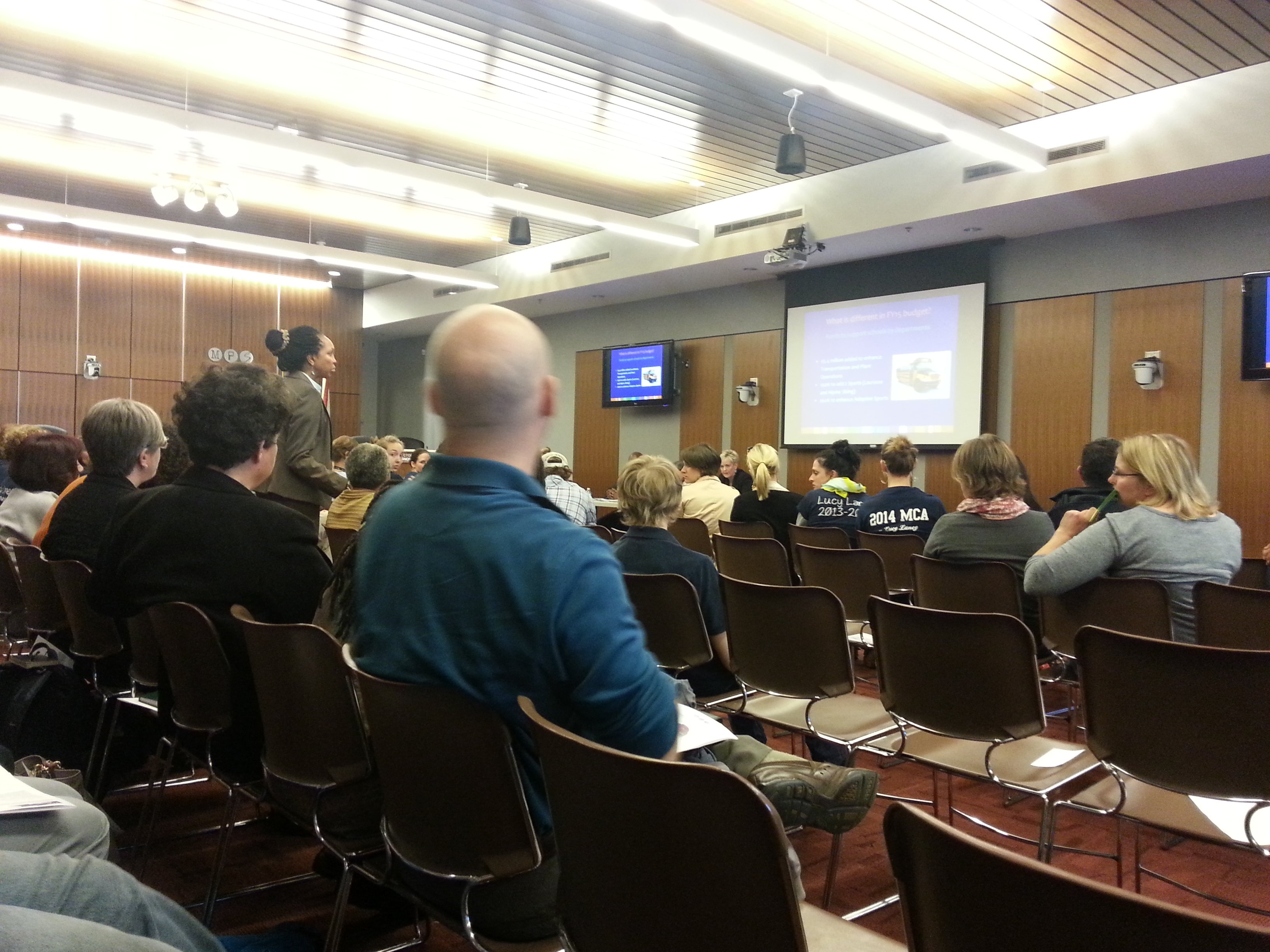 Amid a rocky rollout of its 2014-2015 budget, the Minneapolis Public Schools (MPS) has planned community engagement sessions throughout the month of April in order to ensure a budget process that is “disciplined, predictable, and transparent,” according to its website. The April 22 community engagement session was held at the district’s Davis Center headquarters, around the theme of “school board engagement.” This meant school board members were in attendance, listening to questions and concerns from community members, while the district’s Chief Operating Officer Robert Doty, finance staff member Tammy Frederickson, and Chief Academic Officer Susanne Griffin-Ziebart walked the audience through the district’s budget PowerPoint presentation and fielded questions.

Of particular concern was the school’s request for more dollars to expand what they say has been a successful co-teaching model. Lucy Laney principal Mauri Melander says the school has been using additional staff for math instruction since the 2011-2012 school year, and that the effects have been positive. Now, the school has asked that the district allocate more funding to Lucy Laney so that they can also implement a co-teaching model for literacy instruction.

Susanne Griffin-Ziebart, however, said that allocations for the 2014-2015 budget have already been made, and that the next step in the budget timeline would be to finalize these allocations and present the budget to the school board in June for final approval. Robert Doty echoed this, telling Lucy Laney community members that putting more money into their school would mean taking the money from somewhere else. Griffin-Ziebart did agree to meet with Lucy Laney staff and listen further to their concerns.

Lucy Laney parent Steve Walden was on hand to express his support for the co-teaching model, and to pressure the district to somehow find the money to further implement it. Walden said that, in his daughter’s class of 27 students, at least five of the students have very high needs, and that having an extra person in the classroom, even for part of the day, means that more children are learning and getting the support they need. In his view, the co-teaching model, where a math support person comes to assist the classroom teacher for part of the day, seems to be working.

Other Lucy Laney staff and community members echoed Walden’s statement, with parent Norma Booker saying “everything at Laney changes every year.” Because of this, she said, the school is looking for “continuity and consistency” as the district “flips through programs every year.”

Lucy Laney principal Melander said later, in an email interview, that co-teaching has had a positive effect on her school’s student behavior, as preliminary data is showing that fewer students are leaving the classroom for disciplinary reasons. She also noted that, since 80-90 percent of the student body is not performing at grade level, co-teaching makes the implementation of the district’s standards-based Focused Instruction initiative less “overwhelming.”

Melander and other school community members also spoke of the high concentration of new teachers at Lucy Laney. Extra funding for additional classroom support, they said, would help new teachers improve their craft, and could possibly be an important way to retain experienced teachers, in light of what they said was the school’s high staff turnover rate.

For community member and MPS parent Ariah Fine, the high concentration of inexperienced teachers at Laney leads to a question of whether or not schools are equitably funded. Because all schools in Minneapolis pay an average cost of approximately $87,000 for all of their teachers, schools with a lot of experienced staff, whose actual salary would be higher than the district average, are getting a break on staffing costs. Schools like Lucy Laney, then, with a lot of less experienced and therefore less costly teachers, could be said to be “subsidizing” the more experienced staff at other schools.

Fine’s contention is that Lucy Laney essentially loses approximately $500,000 of its budget, because its average teacher cost is lower than the district average. Returning this $500,000 to the school, he said, would pay for the additional staff Lucy Laney is requesting, and would put the money where it is needed most.

There did not appear to be a clear response to this proposal at the budget meeting, but Fine is hopeful that, moving forward, both the school board and the school district will further consider adjusting how schools pay for teachers.