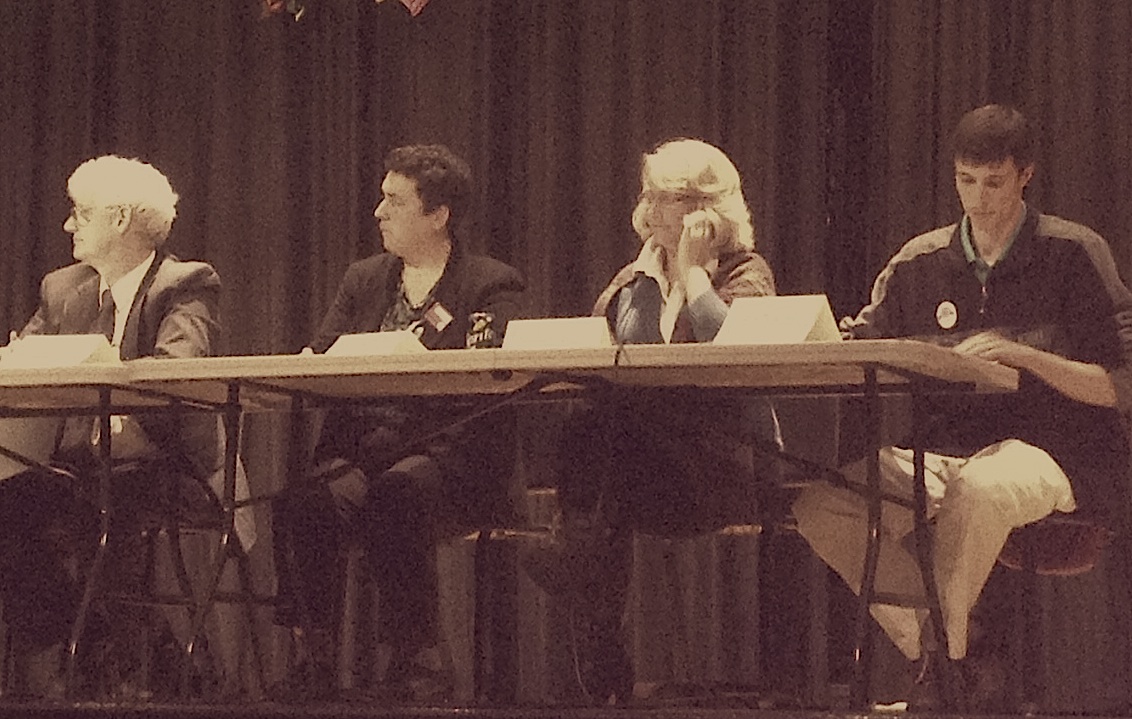 The final Minneapolis school board forum focused on the two contested races: incumbent Carla Bates, and Doug Mann, who are running for the at-large seat and Josh Reimnitz and Patty Wycoff, both running for District 4. Teacher tenure, diversity, and the school budget were among the topics at issue in the October 25 debate, sponsored by the League of Women Voters of Minneapolis and held at Jefferson Community School.

Although they were introduced to the audience, candidates Kim Ellison (District 2) and Tracine Asberry (District 6) were excused from the panel as they were running unopposed.

Moderator and LWVM member Mary Fisher thanked the audience for their enthusiastic participation, and asked candidates questions posed by the audience. The questions focused on past experience with students who live in poverty, alternative teacher licensing programs, dealings with multimillion dollar budgets and helping parents speak out.

“We need to have community forums that aren’t technically controlled by the school district. In forums like these, audience participation is restricted, “ said Mann in regards to encouraging parent involvement.

He would prefer brief introductions and an open conversation with community members. Both Wycoff and Mann said several family and teacher meet-ups should take place throughout the year in order for parents to better understand the transparency of school and district program offerings.

The Minneapolis School Board currently disperses $750 million. Reimnitz cited his experience with multi-million dollar budgets in the organization he now runs, and as a student in North Dakota.

Wycoff acknowledged not having experience with large budgets. She said she has headed fundraisers in high-poverty schools where “81 percent of students qualified for free lunch.”

The panel also touched on diversity and cultural competency in schools.

“The diversity of Minneapolis is quite profound when you think of the number of groups that we have to reach out to.  We really need to go out and put ourselves on the line,” said Bates. “Part of my job was to reach out to people who don’t show up to these forums and who aren’t filling up my e-mail.”

Reimnitz said he’s made an effort to get familiar with varying communities.

“After the [New Americans Political Action Committee] forum we participated in, I went around the Somali community,” said Reimnitz. “You can tell they haven’t been campaigned to before; they haven’t been addressed or included in the conversation.”

“With the Asian-American communities, there are folks that need to be engaged, especially with how we approach them with ELL,” he said. “We need to talk to them and not expect them to come to us.”

All of the candidates agreed that cultural competency should be an ongoing effort. From the school board down to teachers and educating parents — understanding the importance of differences and educational preferences is vital.

On alternative teacher licensure, the panel was divided.  Bates said that programs should be revamped while retaining teachers from alternative programs — and that divided certification levels are a serious problem. Reimnitz, a Teach for America alum, approved of the program, while Mann said most alternative licensure programs dilute curriculum in certain communities. Wycoff partially agreed.

“I’m in support of alternative licensure, we definitely need it,” Wycoff said. “There are not as many people gong into education as there once were. We need to support programs that have the same kind of requirements that an education major has.”

“It’s unequal for students of color to have teachers that have a different set of criteria than white students,” Wycoff said. “Teach for America isn’t in Edina and they’re not in Lake Harriet.”