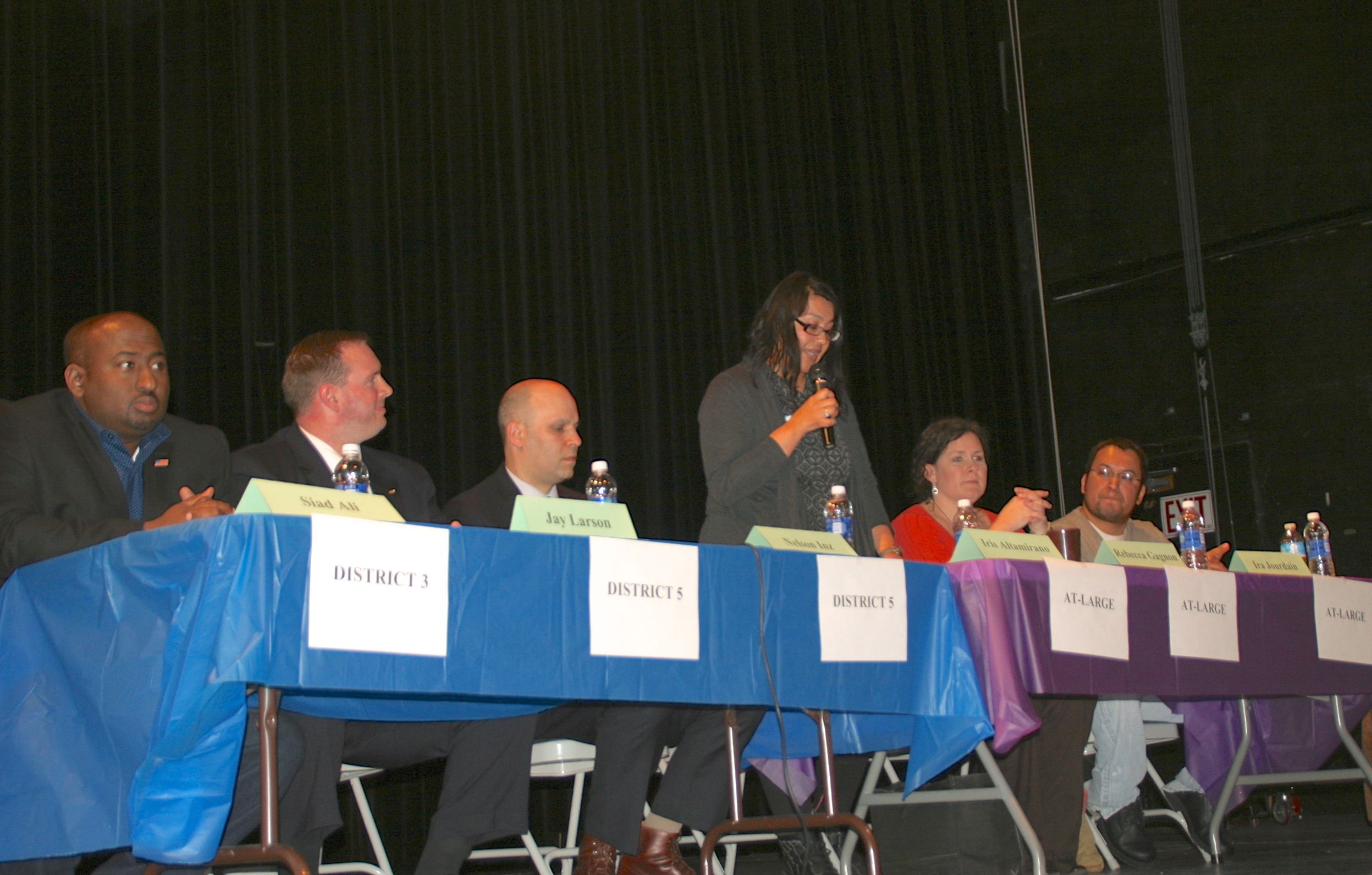 Candidates address the audience about how they would solve problems in public education in Minneapolis.

Delegates to the April 26 Minneapolis DFL City Convention, along with a handful of parents and educators, sat in the half-filled auditorium April 17 at Sabathani Community Center to hear candidates for the Minneapolis School Board give their views on what can be done to improve public school education in the city. The forum was sponsored by the Coalition for Quality Public Schools, a group focused on addressing racial and economic disparities in local schools.

The candidates faced moderator Nicque Mabrey, an associate director at Out Front Minnesota and an anti-bullying advocate, along with a panel of four community members who posed questions about high-stakes standardized testing, bullying, class size, school closures, discipline policies and community schools.

“We want to bring together different view points,” said Mabrey. “We have to transform school culture and focus on the first steps to change.”

The candidates – Siad Ali from the 3rd District, Jay Larson and Nelson Inz from the 5th District, and Iris Altamirano, Rebecca Gagnon, Ira Jourdain, and Andrew Minck running for two at-large seats – are seeking the party’s endorsement. At-large candidate Doug Mann, a democratic socialist, is seeking an indorsement from the Green Party.

All the candidates agreed that there are troubling problems with local schools, including ethnic differences in graduation rates. While graduation rates are rising, 21 percent of students still don’t finish high school. The numbers get worse with minority students. Last year, only 56 percent of black students and 58 percent of Hispanic students graduated, according to the Minnesota Department of Education. But, 85 percent of white students left with a diploma in hand.

The candidates all spoke highly of the community school model as one solution, where schools serve the neighborhood beyond the teaching day and provide wraparound support services to address the achievement gap.

“We need to be building partnerships with the county, with medical, eye and dental clinics,” said Gagnon. “They should include services for families and be open beyond school hours.”

The candidates also agreed that getting more minority parents involved with the schools was essential. Larson said Hispanic parents at his children’s school hadn’t been involved in the PTA until someone they reached out to them, offering them their own night to meet. The method was a success with more parents and more diversity when no one was involved before, he said.

One area where there was disagreement was on focused instruction, a controversial set of guidelines that sets rules for teachers on what and how to teach and test. Focused education is currently in place for Minneapolis teachers from pre-school through high school, with standards, lesson plans and study units set for each grade.

Altamirano, Larson and Inz saw some value in the programs, but agreed that the programs can be too strict. “The purpose was to let kids go from one school to another and still stay on track. But, it needs more flexibility to work,” said Nelson.

“We need focused instruction, however, it’s challenging to teachers because not all kids learn at the same level,” said Larson.

Others, like Ali, had little good to say about the program. “Teachers know the best way to teach,” he said. Minck agreed. “As a board member, I’d want to look at data to see if focused instruction is doing what it should do. But, we need to let teachers lead.”

“I’ve talked with teachers and parents,” said Jourdain, “And I’d say no. Focused instruction takes away from the teacher’s ability to reach out to each child. It’s a blind eye way when it comes to reaching our kids. I’d want to look at other alternatives.”

DFL delegate and special education assistant at Jefferson Community School Sheila Crabbe had come to hear the candidates and learn their views on the issues.

“I could see how the candidates are passionate about trying to make changes. They had good stories and they have experience. What I didn’t hear was how they’re going to help support the people who work directly with children,” she said. “Teachers, assistants, janitors – everyone who works with the children need support from the district to do their jobs. It’s not just about policy, it’s about wages and benefits. I didn’t hear anything about that.”

CORRECTION 4/22/2014: Apologies to Andrew Minck – we misspelled his name and have corrected it.