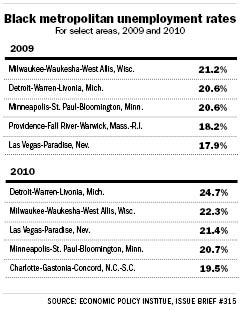 Private contractors looking to work on city projects will have to meet higher hiring standards if they want to win a bid.

The Minneapolis City Council revised its minority workforce hiring goals March 30, raising its standard that 32 percent of contractors’ employees be minorities — up from 11 percent.

The city doesn’t require contractors to meet this goal, but if they aren’t showing progress or aren’t close to it, the city is less likely to pick that contractor. The new goal goes into effect May 1.

The goal aims to reduce the disparity between white and minority unemployment numbers, which a recent study from the Economic Policy Institute showed was one of the highest among metropolitan areas in the country.

According to the study, the rate of unemployed African-Americans in the Minneapolis-St. Paul metro area is almost four times that of whites. This is despite the fact that Minneapolis’ unemployment rate was lower than the national average every month in 2010, according to the Bureau of Labor Statistics.

John Stiles, communications director for Minneapolis Mayor R.T. Rybak, said reducing the minority unemployment rate is a top priority for the city and the mayor.

“The city of Minneapolis as an employer can and should do everything that we can to pull our weight in this effort,” said Stiles.

“It’s not only a moral imperative, it’s an economic imperative,” he added.

Joe Soss, a professor at the Humphrey School of Public Affairs who specializes in poverty and inequality, said the revised goals are a “crucial step” in the city’s effort to reduce minority unemployment, but more assistance is still needed to sufficiently reduce the disparity.

“We also should see some public investing in minority communities to make sure that those workers are trained and available and have the support they need to enter into those jobs and work them successfully,” Soss added.

Tim Worke, highway and transportation division manager for Associated General Contractors of Minnesota, said he was frustrated to see the goals revised so high.

“We felt like we were making good progress, but you can’t just snap your fingers and expect change,” Worke said.

He added that there isn’t a large enough supply of skilled minority workers to meet these goals.

“We’d like for our workforce to reflect our diverse community, but you can’t just throw out a number,” Worke said.

The goals were revised to reflect recent census data, which showed people of color made up almost 40 percent of Minneapolis’ population.

The state has also set goals for minority hiring for contractors looking to work on public projects.

For the seven-county metro area, the goal is set at 22 percent of a contractor’s workforce.

“This isn’t altogether altruism or wealth distribution,” King said. “According to the state demographer, we have an aging white population and a growing minority population, so this is just fitting with the demographic trend.”