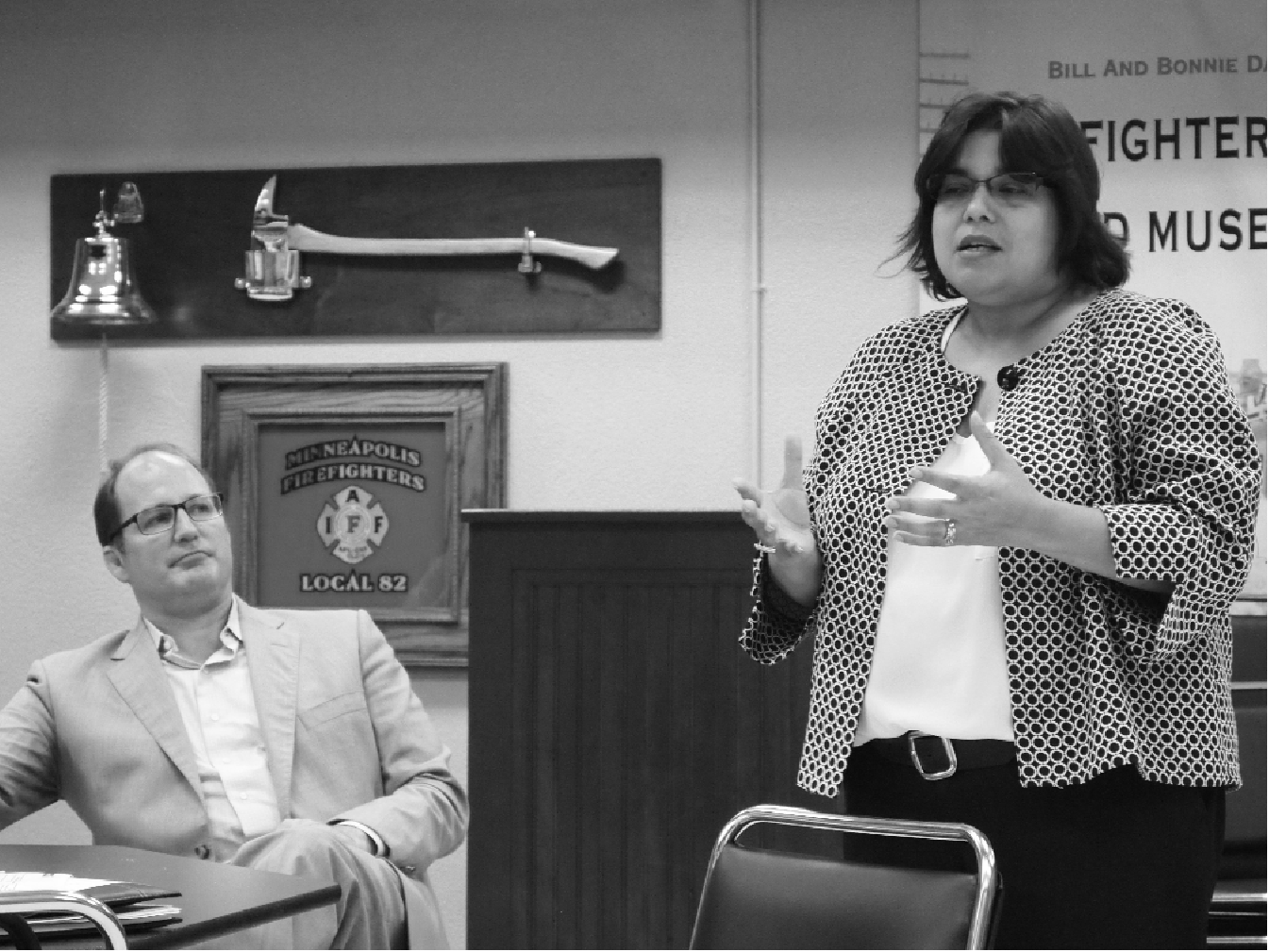 First Ward Council Member Kevin Reich served on the task force that reassigned some of the functions in the regulatory services department, and hired its new head, Nuria Rivera-Vandermyde, at right. (Photo by Margo Ashmore)

Three things stand out from an introductory meeting with the City of Minneapolis’ new head of Regulatory Services, Nuria Rivera-Vandermyde. That’s in addition to her having married a Northeast guy. Some of her key points:

First Ward City Council Member Kevin Reich hosted the meeting as a First Ward Forum at the Firefighters Hall and Museum Aug. 28. He explained how city leaders decided to re-think the organizational chart and put regulatory functions where they more

naturally “live.” Such as business licensing, construction code services and development review functions going to the Community Planning and Economic Development department, and environmental management coming under the Minneapolis Department of Health and Family Services which was “yearning to do more.”

City leaders have heard voluminous complaints, particularly from small businesses (which drive economic development, Reich said), about how hard it has been to deal with the City in say, the past decade. Some businesses can hire the lawyers and advocates needed to see a business application through a process, but “a small business person can’t just write a check, it’s usually themselves trying to navigate all this,” he said.

The system had become punitive, antagonistic, and centered around generating fees, many residents and business people believed. At the same time, a survey showed city employee/team morale in regulatory services was low, the new chief said.

Enter Nuria Rivera-Vandermyde, survivor of a rigorous candidate search process. The task force that redesigned the organizational chart also recommended her to the mayor, who then followed standard procedure for this “charter” position. Six months remained on the previous incumbent’s term, and she was appointed to fill that out plus another two years.

An attorney by training, she got experience in compliance through a long-running lawsuit on prison conditions in Puerto Rico. She speaks of being a data person, but also talks about breaking down silos and encouraging different kinds of inspectors to alert each other to potential problems. For example, she said Animal Care and Control is encouraged to call other inspectors in when they find unlicensed pit bulls, as their presence (the fact that it is that breed and unlicensed, she emphasized) tends to be correlated with other negative activity.

About rental properties: “There are over 24,000 licensed rental properties in the city, and over 16,000 of them don’t have any issues. Those in our Tier 3 program, those with the highest volume of calls, number 774. That’s very good,” Rivera-Vandermyde said.

She talked about the “conduct on premises” concept which targets behaviors and is enforced by police, not reg services.

She’s working on a program to pre-warn residents that an inspection sweep will be coming (though she doesn’t want to use the word “sweep,” she hasn’t come up with a good name yet, she said). In the notice letters, she wants to partner with local businesses to offer discounts on materials most people would need to fix what’s wrong with their homes. This will be piloted in North Minneapolis.

Regulatory services has stationed an inspector at the new city Department of Neighborhood and Community Relations to help people who are unable to keep up with home repairs because of age, disability or other challenges. “I don’t want to fine people out of their houses.” If a person walks away from a house and it is tax forfeited, “the city will be writing off those administrative fees, so why not work with a person and keep them in their homes,” Rivera-Vandermyde said.

As director of regulatory services, she can issue “director’s orders” to rehab a property as well as the better known tear-it-down. She can’t, however, seize and give it to a third party, as was suggested in the highly publicized “Rehab Addict” Nicole Curtis’ last ditch effort to save one of the homes. That said, Rivera-Vandermyde seemed to be leaning toward a more forgiving stance, preferring to see properties rehabbed rather than torn down.

She said she’s ordered an analysis of the Vacant and Boarded list for properties on the list longer than two years, to figure out why the market hasn’t absorbed them. It will go to the Minneapolis City Council soon.

Nuria, as she invited people to call her “because the rest is so hard to say” got married in 2006 to a son of the Vandermydes of Northeast, and lived in the area for quite a while before moving to Fridley. “I have a three-year-old, late in life,” she said, and said she still spends a lot of time in Northeast. Grandpa was babysitting for her during the meeting.