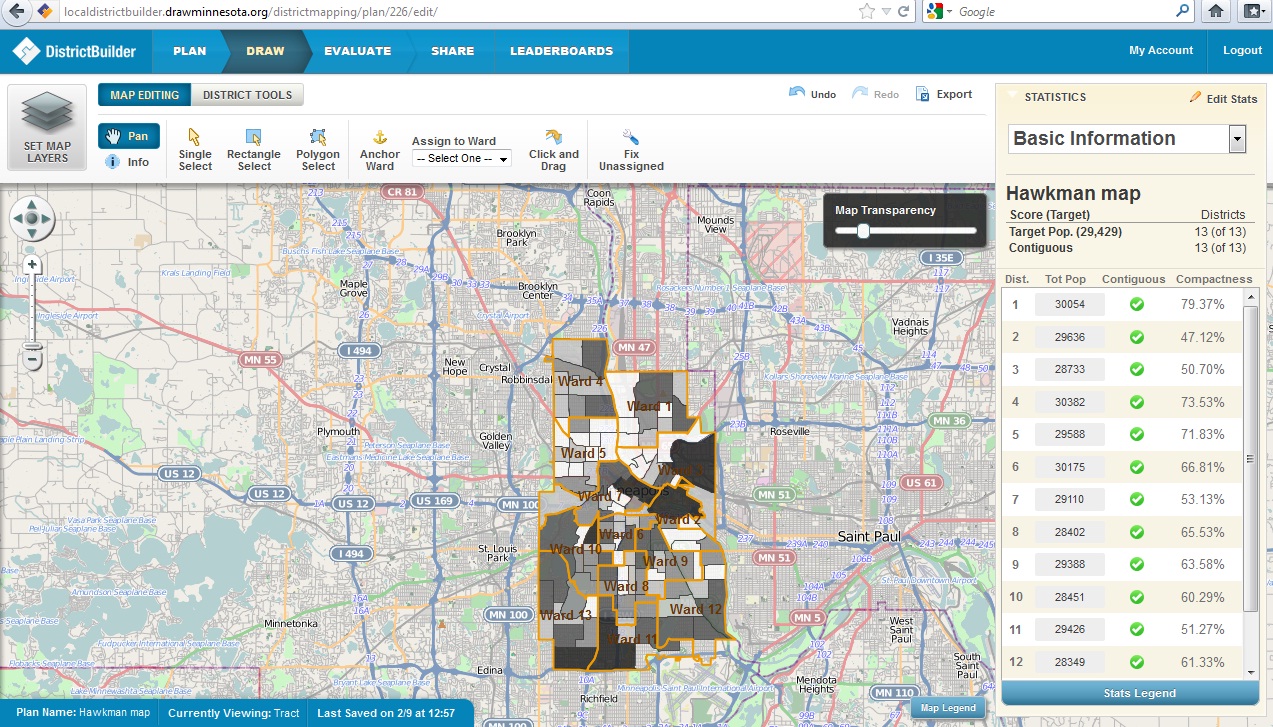 The city of Minneapolis is in the midst of redrawing its district lines, and now is the time to add our voices to the process. A public meeting will be held on February 29th, from 5-7 p.m. at the Webber Community Center, 4400 Dupont Avenue North. In the meantime, people can tinker with their own maps at www.drawminnesota.org. This Saturday, CURA will host an event at UROC to teach people how to use the website to make their own ward maps. Sometimes open-source sites like this can harness the collective intellect of communities and result in better maps than what professionals would have created.

Now if I were in St. Paul, I’d try and make a redistricting map that would lead to clues about the location of the Winter Carnival medallion. Then I’d see if Nicolas Cage was interested in coming to our capital to film National Treasure 4 and maybe resolve some daddy issues with Jon Voight. But since we’re on the nicer side of the river, and wards have to be contiguous anyway, and those are some of the most terrible movies ever, I’m sticking with Minneapolis maps.

Minneapolis has their own site that describes redistricting rules in detail, but essentially they require that there be 13 contiguous wards, that they fall within certain population ranges, that the wards follow center lines of streets, avenues, alleys, and boulevards whenever possible, that current boundaries change as little as possible, and that communities of interest remain together as much as possible.

The ideal ward population is 29,429, and wards must fall within 5-10% of that. The population range for Minneapolis wards is 27,958 – 30,900. As an aside, there is a great site that shows the history of Minneapolis ward boundaries.

The big question in NoMi seems to be whether we’ll still have three wards or if we’ll be reduced to two because of population loss. I tried making my own map and there really doesn’t seem to be a good way to create three wards. For better or worse, we will likely have just two council seats for the next ten years.

Next, I looked at the proposed sample maps on the city’s website. I had envisioned Lowry as the natural dividing line all the way across the northside. But all of the maps so far have a little triangle that dips down at the western edge of NoMi. The triangle varies in specific size and shape but at its largest would encompass the area between Penn, Lowry, and Broadway. When I made my own map, I tried drawing the line straight across and found out that the population numbers for the wards just don’t line up without the fourth ward dropping down south of Lowry for a bit in that area. I drove around that part of town earlier and there wasn’t a high-density structure that would clearly tip the scales, but the map numbers don’t lie.

I don’t recommend anyone use my map as a guide for how to redistrict the entire rest of the city. I only focused on where I know the best and then made sure the other wards were contiguous and met population rules. The drawminnesota website will also produce reports that evaluate how well your maps meet certain requirements for redistricting. I’m hoping that the CURA presentation will teach us how to evaluate those findings and how to use the website to comply with the various federal and city guidelines.

Now is the time to get involved in shaping our city and park districts for the next ten years.