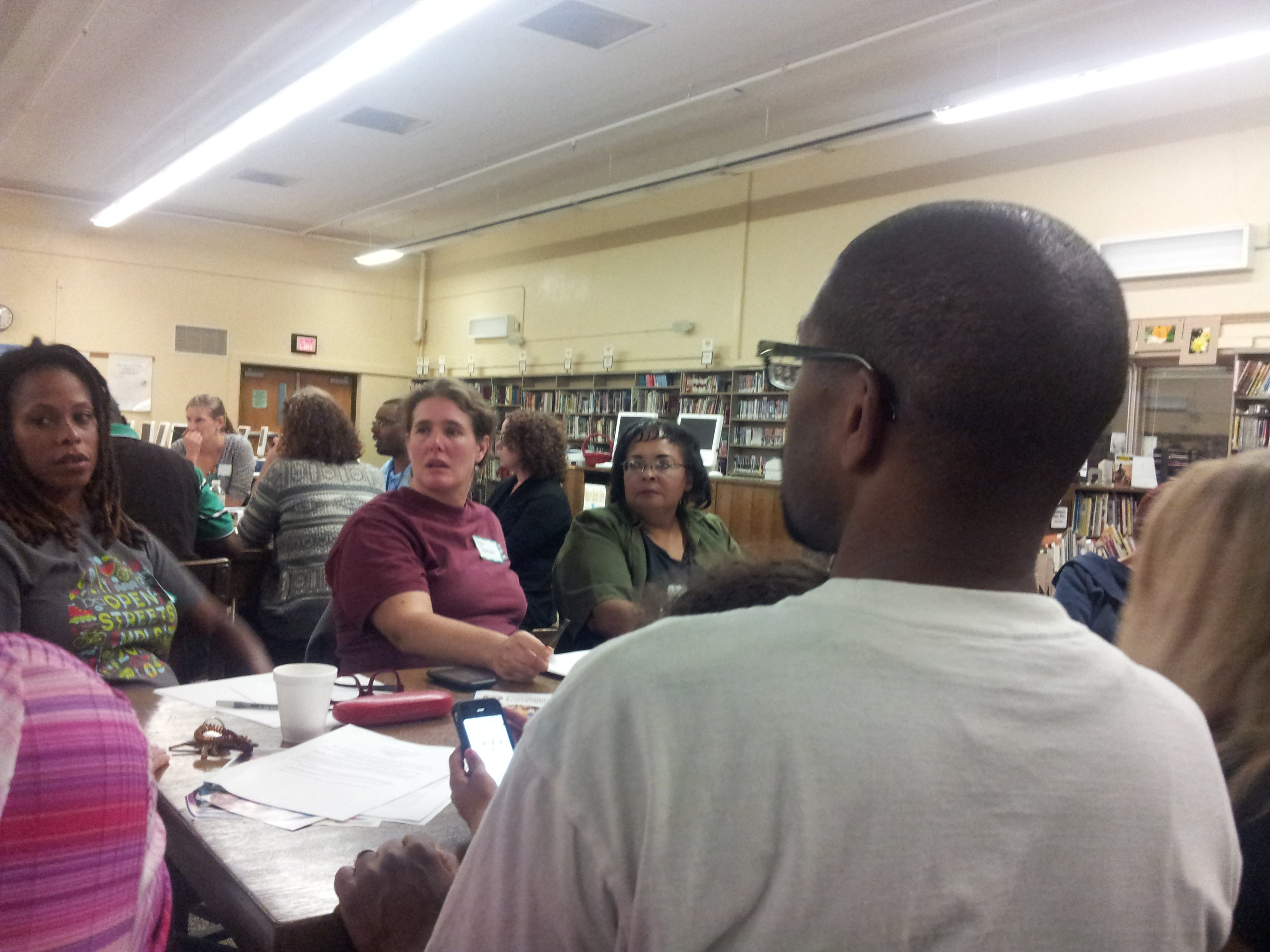 Thomas used a Powerpoint to introduce key points of the plan, taking a few questions from the audience as he went. The people in attendance were then divided into small groups in order to discuss the proposed plan and provide feedback for the district.

Although this plan was just announced to the public on September 24, Thomas said the plan is not as new as it seems. (See PDF of five-year plan, as presented to school board in September – attached.)  According to Thomas, this new plan grew out of the district’s Changing School Options (CSO) program, which made changes in such things as attendance areas and busing, and was implemented in 2010.

Additional listening sessions are scheduled for:

The school district says the five-year plan is necessary because enrollment in the district is growing. Over the next few years, 3,000 more students are expected to enroll in the district, causing, according to Thomas, “higher class sizes” than are desirable.

Many seemed pleased with the district’s acknowledgement that class sizes are too high, and therefore more classroom space is needed. One proposed remedy for this situation involves moving the French Immersion School, Pierre Bottineau, out of the building it shares with Hmong International Academy, and putting it into the CItyview building, which it will share with Sheridan. The Sheridan Arts Magnet program will become part of a “STEAM” (Science, Technology, Engineering, Arts, and Math) school. The slide below, from the September presentation to the school board, shows the first part of the reorganization plan for Zone 1. (For full presentation, see PDF – attached.) 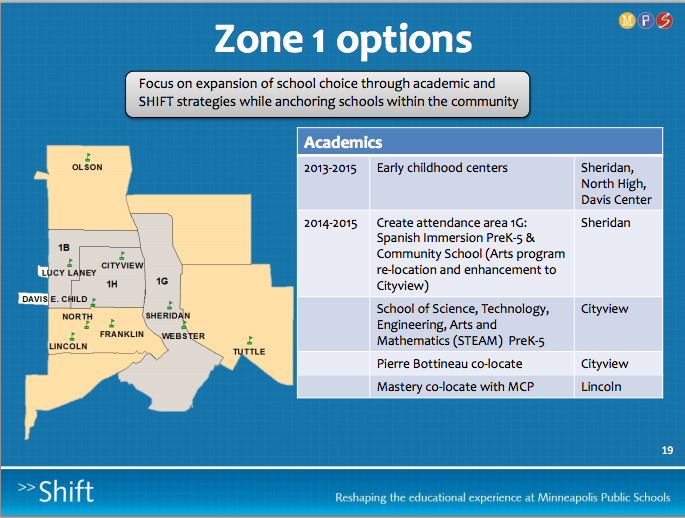 Community members seemed to accept Thomas’s statement that some aspects of the proposal “might not work right,” right away. Thomas insisted several times that “public feedback is absolutely critical” to the district’s decision-making process regarding the five-year enrollment plan.

According to one of the slides in Thomas’s Powerpoint presentation, 47 percent of the students and families in Area A, Zone 1, will be “disrupted,” as the district calls it, by the new plan, which is a higher rate than the district’s other two zones. The slide also revealed that 71 percent of the district’s poorest students would be similarly disrupted.

These two projections raised red flags for many in attendance.

Elizabeth Hall Elementary School parent Ariah Fine asked why the district decided to hold its first community engagement meeting, in the part of the city most likely to be directly impacted by the plan, just one week after announcing the proposed changes. In Fine’s view, this was not a good way to gather informed input from the community.

Another parent grew emotional during the small group session as she tried to explain how hard she has worked to give her own two children a better education than the one she got. Saying she was “sour about what has happened” in the schools in her area of north Minneapolis in recent years, with programs closing or being shifted around, this parent said she “does not want her child to be an experiment” for the district. Instead, she spoke of “wanting assurance” that community voices will be listened to, and that good schools will available for her children.

One of Thomas’s slides also mentioned that the five-year enrollment plan closely aligns with Superintendent Johnson’s “Shift” proposal, which was announced in May. When asked whether any of the reconfigured schools in the five-year enrollment plan would become “partnership” schools, a concept introduced by the Shift proposal, Thomas could not provide a clear answer, although he seemed fairly certain that the two plans were separate.

The rapid succession with which large initiatives have been rolled out by the Minneapolis Public Schools in the last few years seemed to have left some in attendance feeling dizzy. During a final question and answer session with Thomas, participants suggested that the district would do well to “move away from constant shifts” regarding where kids go to school, and instead concentrate on providing “strong building leadership” and the “stability of strong programs” in all schools. This final note seemed to sum up the views of many in attendance.

1) Ariah Fine is a parent at Elizabeth Hall Elementary School, and not Pierre Bottineau.