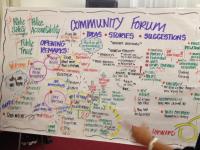 In an open letter to the community, Minneapolis Mayor Betsy Hodges acknowledged that some of the city’s police officers have abused their power, and she promised to repair the department’s reputation as a cornerstone of her administration.

The Star Tribune reports that the mayor’s assessment came the same day the U.S. Justice Department released preliminary results of a yearlong police review that concluded the department must get far more aggressive in rooting out bad police officers.

On Wednesday, October 8th, Hodges and Police Chief Janee Harteau convened the first in a series of meetings to talk about policing. Among the questions raised were several having to do with the city’s commitment to constructively intervening in the behavoirs of children and their parents.

Janis Lane-Ewart attended the meeting and provided some excerpts for program host Paul Brohaugh on the Morning Blend. [Audio below]