The City Council voted in December to set aside $400,000 to equip Minneapolis police with body cameras to help improve accountability, but University police Deputy Chief Chuck Miner said he doesn’t see a need for the devices on University officers — at least not right now.

He said he expects body cameras to be common policing equipment in 10 years as law enforcement continues to use more video recording technology, but functionality and financial reasons are keeping the cameras out of UMPD.

University police have had video cameras in their squad cars for about a decade, and UMPD was one of the first departments to do so. Miner said these cameras provide enough surveillance, but the department isn’t completely against the idea of getting body cameras in the future.

Miner said the department started looking into buying body cameras for officers about a year ago but found they aren’t as functional as squad car cameras and are a big spending decision.

He also said some officers might be concerned about the privacy implications of having cameras on their bodies at all times.

“I think all of us would have a concern about that,” he said. 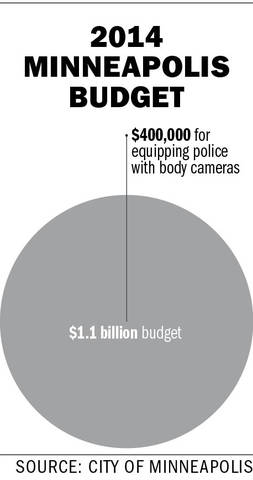 If UMPD installed the body cameras, then the University, not the city of Minneapolis, would cover the cost. The body cameras would likely come at the same time the department purchases new squad-car cameras, Miner said.

The project is still in its preliminary phases, and many details have to be ironed out, he said, but it’s on the “front burner.”

While officers have traditionally reacted to recording devices with reservation, using body cameras while on patrol to improve transparency is a growing trend nationwide.

He said they were useful for investigating, documenting crime scenes and evaluating complaints about officers.

Elder said there were privacy concerns when police departments started using cars with camcorders years ago. Now, he said, officers appreciate the recording because it often serves as evidence that clears officers during misconduct cases.

Liability issues and cases of police misconduct were some of the main reasons the City Council voted to approve the budget allocation for the cameras, said John Dybvig, policy aide for the chair of the Ways and Means Committee.

If a police officer is accused of misconduct, the case often turns into a series of “he-said, she-said” evidence, Dybvig said, but the cameras would help give concrete evidence.

Minneapolis police received 75 allegations of misconduct last quarter, according to the Office of Police Conduct. Of these, 13 cases were dismissed.

Boiled down, the benefit of a body camera is simple, Gieseke said.

“Basically, it preserves the truth.”

CORRECTION per Minnesota Daily 1/30/2013: A previous version of this article incorrectly stated how 13 of 75 misconduct allegations last quarter against Minneapolis police were resolved. The 13 cases were dismissed.