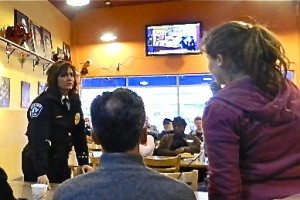 Minneapolis Police Chief Janeé Harteau is a beacon of hope, speaking at the monthly “Breakfast with Gary Schiff” event at Mercado Central on Lake Street. Chief Harteau wants her police force to act on the guiding principle “Did my actions reflect how I would expect a family member to be treated?”. She wants her police to not assume everyone is a criminal. The oath of office and professional attire is a reminder of the commitment to working with the community.

Minneapolis is Minnesota’s largest city with a population of 380,000 people. Historically, Minneapolis has had high payments to victims for police misconduct in comparison to other cities of the same size. The police chief has the inertia of over 800 member police force to move away from a militarized standard to a community policing standard. The arbitration rules that our state has established push against that change. Arbitration has reinstated the most offending members of the police force, who were fired for misconduct.

Still there is hope in that 64 percent of the police department is over 40 and is heading toward retirement. Chief Harteau spoke of the many ways that she is trying to get high-quality diverse talent. She would especially like to attract a Somali woman to the police force.

There was discussion on how the police and the community can work better together. For example, if you are questioned by a police officer, they will ask that you have your hands visibly out in the open. Even in the dead of winter, they will ask for this because of safety.

Chief Harteau spoke of how the police force had to let people know what had been done on their cases instead of leaving them with no contact. She says that is the police responsibility to let them know of the efforts made. When no contact is made, people wonder if anything was done.

One audience question drilled down on if the private money paying for police working in the warehouse district bought the police loyalty away from the community. Chief Harteau thought the pooling of funds ensured that loyalty stayed with the community, not an individual or an individual business.

The most amusing story was Chief Harteau explaining how she had to take lunch away from the public. Anytime she ate lunch in public, she would get comments about “business” being slow.