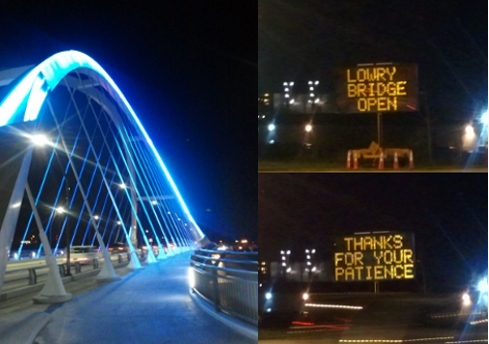 On Saturday, October 27, 2012 the Lowry Bridge reopened first to bike and pedestrian traffic and then to vehicles in the evening. Plenty of media were there to cover the event, and regular folks were ubiquitous in their Facebook, Twitter, MySpace, Google+, and Youtube postings. The photos above are of the bridge at night, the signs thanking the public for their patience, and the ribbon moments before it was cut.

Next up, we have a map of my Runkeeper recording of my first bike trip across the bridge. Interestingly enough, Google Maps hasn’t yet been updated, so the activity log makes it appear as if I either biked on the water or in midair instead of on a bridge. When the fitness app tried to upload my settings for biking, walking, or other types of equipment used, it couldn’t decide whether to suggest E.T. or Jesus.

In contrast to the nighttime view, here’s what that sexy curve of the bridge (can one describe a bridge as sexy? In this case, yes.) looks like in the light of day.

High school mascots from each side of the river held the ribbon while it was cut, and I got a terrific shot as the clippings fell to the ground.

Back to a few night shots. The bridge apparently is built not only for current bikes, but for the light cycles from the movie Tron.

For now though, I’ll have to be content with the bicycle I’ve got.

(Photos and video by Jeff Skrenes)