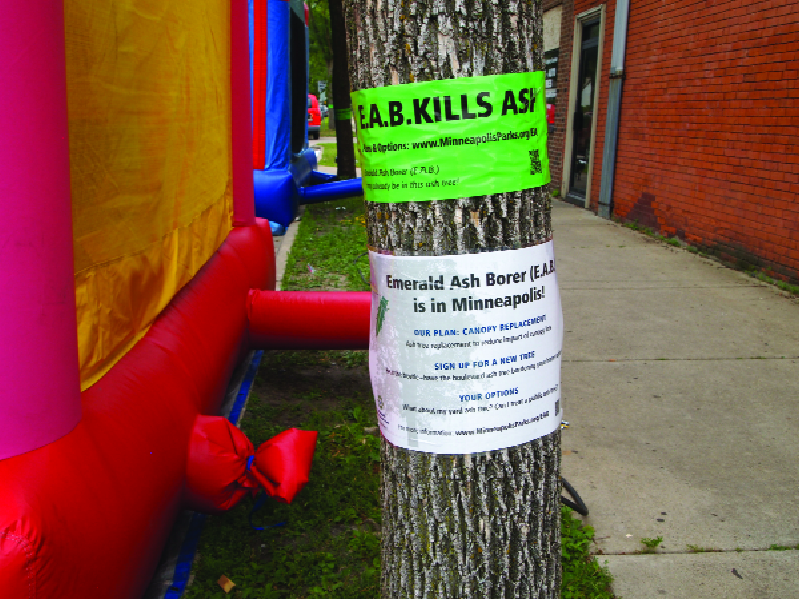 Last year when the (utility-related) tree trimmers came by, they butchered one of my green ash boulevard trees. Well, all three, but one in particular. It was explained that the trees are probably soon goners anyway with emerald ash borer (EAB) on the way.

So why not just cut them down now? Well, this year, that’s what the forestry department is offering to do, free, for homeowners who request “pre-emptive removal.”

And, they will automatically arrange for replacement trees for the following spring. Northeast’s city forestry chief Gary Myhre said this effort is meant to preserve, replace and diversify tree canopy. “If someone just wants trees cut down, this isn’t for them.”

Tree spacing might change slightly, but they’re prepared to grind the old stumps deeper than usual (18 vs. the usual 8 inches) if it’s decided to put the new trees in the exact same spots. Nearby trees and other factors determine that.

Preparing for Open Streets July 28, Forester Technician Philip Potyondy and his cohorts at the Minneapolis Park and Recreation Board (MPRB) tied green plastic ribbons around the ash trees perpendicular to Central Avenue, mostly in the Windom Park Neighborhood. “E.A.B. Kills Ash. Plans & Options www.Minneapolis Parks. org/EAB” they say. Potyondy explained that the trees may or may not have EAB, they haven’t been diagnosed.

But he said it’s sobering to note this: In trees cut down known to have the borer, they studied (by growth rings) how long the borer had been in the tree before being detected, and concluded it was three to five years. “The green band is aggressive language, to a degree. What we don’t know is how quickly the emerald ash borer population” will go exponential.

There are insecticide treatments available, and some boulevard trees may be good candidates for the injection treatment to ward off the borer. A resident can opt to pay and arrange for the treatment if the tree is otherwise in good shape and well-situated.

Some communities are treating all their trees so that they can replace them on their own schedules. There are communities with standing dead trees that don’t harbor the pests (they need living wood to complete their life cycle), but do present hazards for falling. “They get brittle,” Potyondy said.

Minneapolis has 40,000 ash trees on public property. Many were planted during that era when it was expected that all utility lines would be buried, so the trees went directly under the lines, Potyondy said. These trees have already lost more than 30 percent of their canopy to utility-related trimming, so they will not be good candidates for insecticide treatment.

What will replace the ash? Under “three phase” primary power lines, the current palate includes the Japanese tree lilac and crabapples that don’t grow as high as the lines. Amur maple and Ussurian pear are others, Myhre said.

“We’re continuously trying to develop new trees with the University of Minnesota” that will be tough enough to survive boulevard conditions, Potyondy said. As they replace trees, they’re trying to get diversity within the block; previous administrations planted entire blocks with the same species, which could be trouble if a pest comes along.

Under feeder lines, cable or phone lines that have a single wire, “we can plant medium growing decurrent trees (those that branch often) so the power company can clear around them” rather than lopping off half the trees, as happened with many ash. Decurrent trees include coffee trees, locust, river birch, autumn splendor buckeye, lindens, basswoods, hackberries and more. “We would do more oak. Ninety percent of the time people say they want a maple. There are some maples that are well chosen, they are good urban trees but there are too many of them, twice as many maples as ash.”

The forestry department has been planting 5,000 trees a year and its people want to remove 5,000 ash per year. That pace is ideal, the “magic number” for the current staffing level. “We’re working to get a higher staffing level to deal with emerald ash borer.”

Potyondy noted the forestry staff are still dealing with recent storm damage, Dutch Elm disease and tornado-related replacements also. When Myhre visited my house to look at the three ash, he said because of storm work “we haven’t started our summer work yet and here it’s almost fall.”

Myhre said crews can work through much of the winter removing trees. “Like the firefighters digging out hydrants” they will clear snow away to get to the trunks. Homeowners with planted boulevards will have less damage from equipment when the plants are dormant. However, they will want to remove plants in an area four feet in either direction the following spring to prepare for stump grinding. The usual re-planting season is mid April to June 1, and stump grinding starts about June 1 (it’s contracted out).

And you probably don’t want to keep an ash stump; they’re aggressive re-growers, you could end up with a bush out of control.

Potyondy said trees take three to five years to get over transplant shock and start to really put out new growth. That’s why watering is important (see the adjacent box for information on what residents can do to help). Forestry staff do some watering in places unattended by nearby residents.

Potyondy is encouraging residents to help space out the work flow by not all waiting until fall. While there is not really time for in-person consultation with each homeowner, detailed messages and information can be exchanged.

For example, I asked, because I have three trees and a totally blooming boulevard, to meet with a forester. I asked to be sure the trees didn’t get marked for removal until I’d been informed of and agreed to the timetable and the replacement conclusions. If you aren’t sure what you want, this is important, otherwise your trees will be marked. Myhre, who came out, said he has a couple of “scouts” who will look at and mark the trees with a green ring.

We looked at replacement spots, and Myhre explained the clearance needed for stump grinding. I concluded that only one of the trees, the saddest looking, should go as soon as possible (it’ll be late fall or winter) while the plants are dormant. In spring I can relocate the plants for stump grinding before they get big. Myhre spray-painted a “T” on the boulevard where the replacement will go, and we talked about a preferred variety, though it’s not guaranteed I’ll get that choice.

Potyondy said trees benefit from boulevard plantings because they bring in more water, air, nutrients and beneficial wildlife than turf, also known as “green concrete” because it gets so compacted. Tree roots are “very surface growing, the majority are in the first foot to 18 inches,” so bring in the sod kicker but not the rototiller, if preparing to bloom your boulevard. Dig for each individual plant.

Fun facts: The replacement trees are “1.75 caliper,” just under two inches at a certain spot, and are the ideal size for the relative price and quickness in getting established. Larger trees might be planted in areas where they tend to get snapped off. Using multiple vendors and varieties, costs vary quite a bit but the average is right around $110 to $120 for the boulevard tree itself, paid by general taxpayers, not directly by the property owner.

Visit www.minneapolisparks.org/eab for more information, or call 612-313-7710 and inquire about ash tree replacement. You’ll be asked if your trees have been marked for removal, and that starts the conversation about being proactive.