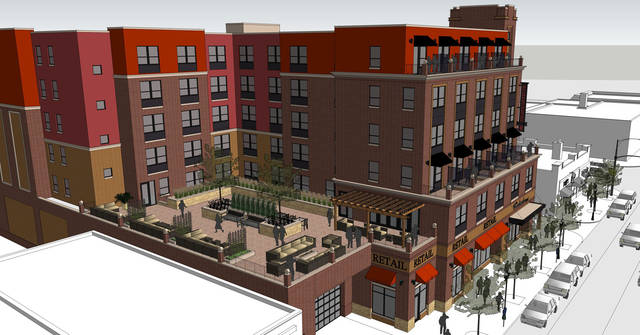 A rendering of the proposed hotel that would be located between 13th and 14th Ave on 4th street in Dinkytown. (Image courtesy Doran Companies)

Three Dinkytown properties, including the building housing Mesa Pizza, have been saved from the wrecking ball — for now.

The commission voted down Doran’s application 9-0 and put the buildings under temporary protection to allow city planning staff time for a study of the land.

Marcy-Holmes Neighborhood Association board member Martha Ballard said she entered the public hearing thinking the city wouldn’t appreciate Dinkytown as much as the local community does.

“And I came out feeling like they get it,” she said. “Like Dinkytown is a little jewel in the whole state and the city, and it’s worth preserving.”

For nearly two hours, community members pleaded for the buildings, while Doran Companies and city staff claimed the buildings should be torn down based on their individual historic worth.

After the commission voted on and denied each demolition application separately, Doran Companies General Counsel Anne Behrendt said the company will reassess but likely appeal the decision, which would come before the City Council on Feb. 13.

“It’ll be interesting,” Ward 3 Councilman Jacob Frey said. “I think there’s a route for collaboration between the neighborhood and the developer.”

The deciding factor for the Heritage Preservation Commission came when city staff explained that the properties would be protected if the area gained historic status, which is recommended under the current draft of Dinkytown’s small-area plan.

Minneapolis city planner Janelle Widmeier said she recommended in the city report that all three properties be demolished because none of them individually qualifies for historic preservation based on her research.

“By themselves, they’re not much,” Marcy-Holmes Neighborhood Association President Cordelia Pierson said of the three properties, “but together as part of the fabric [of Dinkytown], they mean everything.”

Susan Hunter Weir of the Heritage Preservation Commission said she has frequented Dinkytown for more than 40 years and is awestruck by how little change architecturally has taken place over that period.

She said there is a problem with analyzing the significance of buildings one by one.

“You start chipping away at buildings, then you destroy the context, [and] that becomes the reason for more demolitions,” Hunter Weir said. “Then there is no context because everything that contributed is gone.”

Behrendt said Doran Companies was disappointed with the outcome.

“We think it’s the commission’s obligation to look at these properties individually,” she said. “We think that there’s been ample time to designate a historical district here.”

The Heritage Preservation Commission has made things difficult for Doran in the past.

When Mill and Main, a seven-story luxury apartment complex, was proposed in the St. Anthony Falls Historic District, the commission’s specifications cost about $1 million and added a year of construction, Doran Companies consultant Curt Martinson said at a DBA meeting in December.

“[That] almost nixed the project,” Martinson said at the meeting.

Doran said last week that the company plans to open the hotel in summer 2015 if approved.

Most of the hotel would sit on the land housing Mesa Pizza, Camdi Restaurant, Dinkytown Tattoo Shop, Publika Tea and Coffee Union, and the University LifeCare Center.

Mesa Pizza owner David Hathaway said last week that the chain is opening another location in Stadium Village in the spring, which wouldn’t replace the Dinkytown store. Hathaway said he’s still contemplating the future of Mesa’s original location if the building is destroyed.

City planners concluded in their report that none of the three properties “appear eligible” for local historical designation, and they recommended demolition.

“I think the staff’s recommendation is consistent with the facts,” Doran Companies CEO Kelly Doran said last week. “I understand some people out there will be upset about this … because they have this view that nothing in Dinkytown should change. We have a different view. We think that adding a hotel in Dinkytown is a positive addition to the area.”

Dinkytown Business Association interim President and Burrito Loco Bar and Grill owner Greg Pillsbury said the DBA is neither for nor against the demolitions.

“What people don’t want is to completely change the landscape,” he said. “We don’t want high-rise buildings on every corner over there.”

Pillsbury said he likes the blueprints the company showed him for the six-story hotel but wanted to see more public parking.

“The biggest part of the story is parking,” Pillsbury said. “… If you cut off all of the parking, you’re going to have businesses putting ‘For Lease’ signs up everywhere.”

The third property proposed for demolition is a single-family home adjacent to Burrito Loco. The land would host a car-sharing service and a few hotel parking spots, Doran said, but not a parking ramp.

The Marcy-Holmes Neighborhood Association, which includes Dinkytown, openly opposed the demolition of two of the buildings in the lead-up to Tuesday’s public hearing — but not the 126-year-old house.

Pierson said the neighborhood group wants to preserve the historic value of Dinkytown, which dates back to 1900, but would support modern development on the outskirts of the area’s four-block core.

“Protecting the historic value in Dinkytown and our neighborhood together is very important to stand up for,” Pierson said.