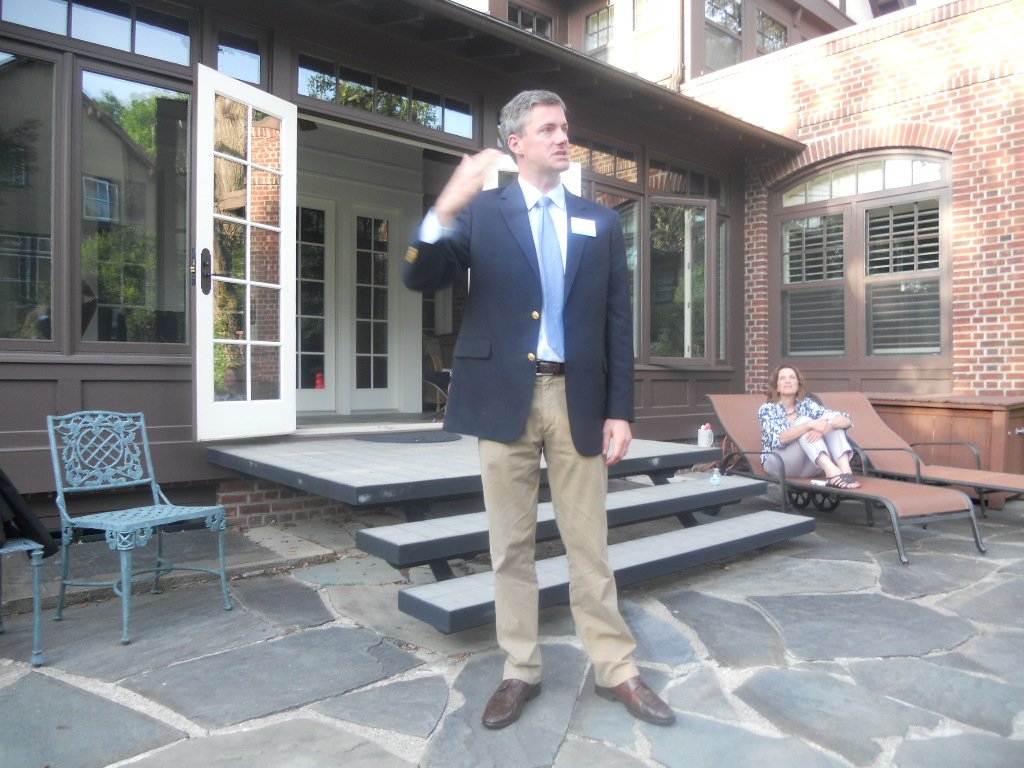 Minneapolis mayoral candidate Cam Winton considers himself a “fresh face” in Minneapolis’ political landscape, partly because he has lived in Minnesota for less than ten years, and also because, as a Republican running as an Independent, Winton believes he is an outsider who can bring “fresh eyes” to the business of city hall.

Appearing on August 14 at the Minneapolis home of Vanessa Dayton, Winton shared his views with a small crowd as part of a casual “meet the candidate” series. He was the fifth candidate to speak to potential voters in this series, and was invited by Dayton, who said Winton is a promising candidate of interest to, “young professionals in Minneapolis.”

As a 34-year-old with two young children, Winton spoke of his desire to reach out to similar young families in order to create a “city that works for everyone.” In Winton’s view, Minneapolis has become an attractive place for recent college graduates beginning their careers, as well as empty nesters from the suburbs who want a more urban lifestyle, but, he said, the city needs to function better in order to remain livable for families.

Winton cited snow plowing as one example, criticizing it as slow and inefficient.  Winton maintained that, for families trying to get out the door each morning, this is an important issue that needs to be addressed.

Winton also expressed interest in closely reviewing the city’s contracts for garbage removal, saying he neither favored nor disapproved of contracting only with companies that employ union members. He said he wants every option considered so that the city will not be tempted to “do what it’s always done.”

Winton then spoke about the need to rework the city’s regulatory services division, in the interest of encouraging entrepreneurial activity and job creation. Winton believes there should be less red tape involved, and that less regulation will lead to job growth more quickly than what he called “blue ribbon committees and task forces.”

On the topic of education, Winton said he was interested in trying to change the city’s charter to allow the mayor to appoint school board members. He said that the current bureaucracy is “not achieving its desired goal,” so it is time to “change the bureaucracy.”

Winton also spoke of taking on long-standing teachers’ union policies, such as the “last in, first out” rule that he said is used to drive layoff decisions.

When a woman in attendance asked where his own children will go to school, Winton mentioned Lake Harriet Lower and Upper School and Southwest High School, which are the public schools in his neighborhood. He noted that this would afford them a “world class public school education,” and said that not all children in Minneapolis have access to this.

When asked why, he mentioned that there might be some “differences in teacher quality,” as well as a recognition that there is “a lot happening outside of school” that can affect a child’s education. Winton then noted that not all children live in “paradise,” as he feels he does in the Fulton neighborhood, and that “every kid deserves a stable home.”

Winton ended by describing himself as a “fiscally responsible” candidate who also voted no against the state’s recent marriage amendment, and who is ready to make “hard choices about what to spend money on” in order to make Minneapolis a strong city for all.