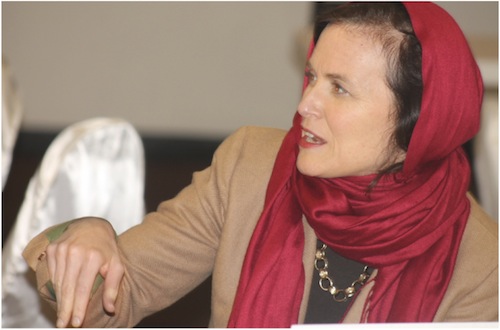 With a red scarf wrapped around her head and reading a few sentences in Somali from note cards, Minneapolis mayoral candidate Betsy Hodges asked dozens of Somali-Americans for two things: their support and vote.

Speaking May 1 at Safari Restaurant and Banquet Hall in Minneapolis, Hodges acknowledged the increasing number of Somalis in the city and promised them employment opportunities, a safer city and housing accessibility.

“Part of the reason I’m here with all of you tonight is because the Somali community in the city of Minneapolis is very, very powerful,” said Hodges, currently the Ward 3 City Council member who represents Southwest Minneapolis. “There’re a lot of people and there’s a lot of power in this community. And we need to make sure that you’re doing well if our city is going to do well.”

Hodges said that she shares the concerns of Somalis about income, education and opportunity disparities in Minneapolis.

“We’ve education divisions, employment divisions, geographic divisions, people being treated differently, living differently,” she said. “Unless we fight that as a city, we’re holding ourselves back from really a great future.”

Hodges spoke of some particular issues and concerns the community has expressed in the past, regarding relationships with the police department. She explained that she has been working on the issues for many years.

“I’ve made it a requirement for my support for police chief that they understand the seriousness of police accountability issues, that they build the culture of the police force widely and well, and know that strong community relationships create more public safety,” Hodges said.

Abdirahman Ahmed, owner of Safari Restaurant, organized the event and moderated the forum, which brought together some community advocates and political organizers.

Ahmed said he’s not expecting anyone to solve community problems. However, he expects a leader who’s willing to work with the community in resolving its problems.

Community organizer Abdirahman Muse said he thinks that Hodges is the most progressive candidate in the mayoral race and can make a difference in the city’s social justice issues.