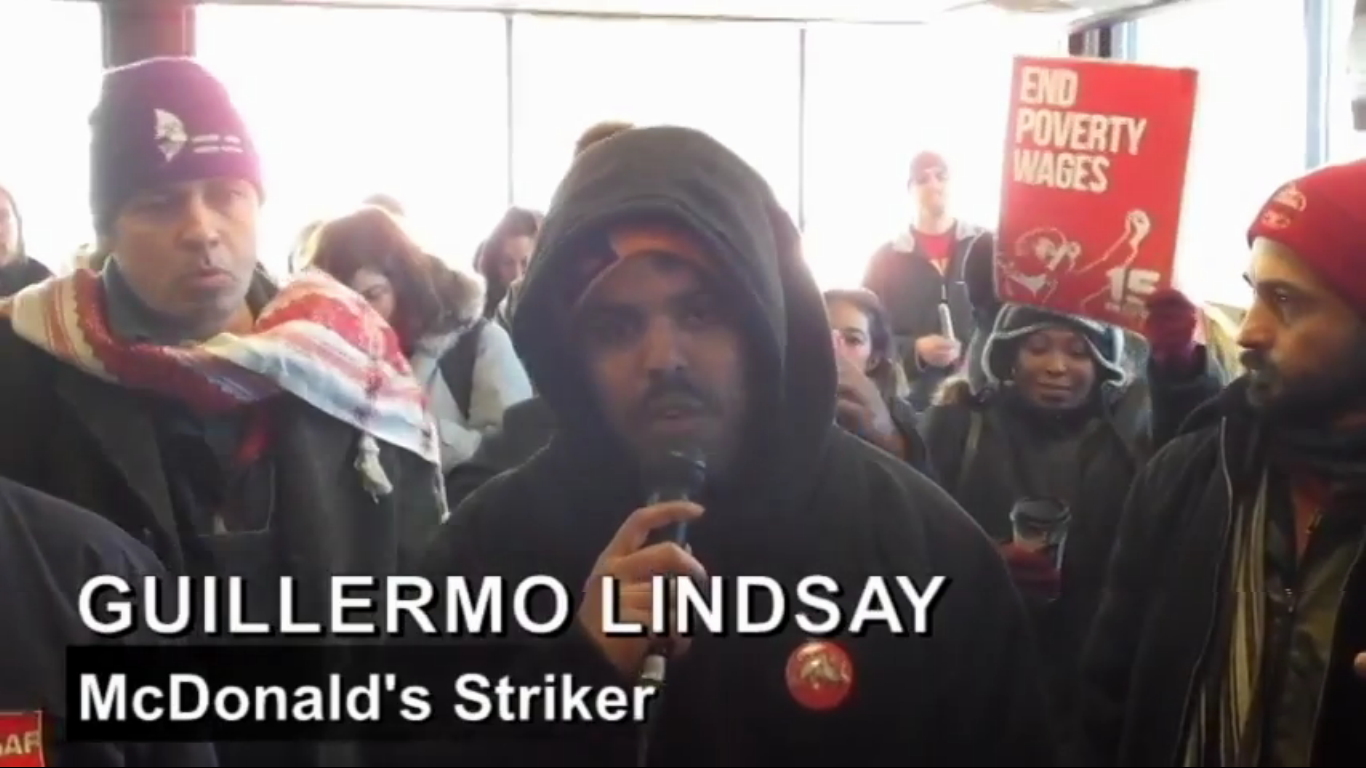 (Still from video below, produced by Labor Education Service for Workday Minnesota)

Joined by Mayor Betsy Hodges, fast food workers and supporters briefly occupied a Burger King restaurant in Minneapolis Thursday as part of the nationwide movement for a $15-an-hour minimum wage.

Earlier in the day, striking fast food workers demonstrated at a Minneapolis McDonald’s. They were joined by home health care workers, Walmart employees, retail janitors and others who began demonstrating on Black Friday for higher living standards.

“I’m part of a growing movement fighting for $15 and the right to organize a union without retaliation,” said fast food worker Guillermo Lindsey. “I work hard and deserve a living wage so I can take care of my family and afford a stable place to live. I’m fighting to live, not just to survive.”

Hodges praised the efforts of the demonstrators.

“I’m proud to stand with these workers today as they continue their fight to organize without retaliation and call for a living wage,” said Minneapolis Mayor Betsy Hodges. ” I support these workers being paid a living wage. Putting more money in worker’s pockets is putting more money in the economy and that is good for our entire community. We can’t silently sit on the edges waiting for every worker to be treated with dignity. I want to be clear, I support these workers’ right to organize.”

Demonstrations were held in dozens of cities across the United States. Organizers say the “Fight for $15” movement began two years ago when 200 New York City workers walked off their jobs at McDonald’s. Since then, actions have spread from fast food to retail, health care, airports and other sectors.

The growing Fight for $15 has been credited with elevating the debate about growing income inequality in the United States.

Slate has called the movement a “stunning success” and wrote that, “dedicated fast-food workers have managed to completely rewire how the public and politicians think about wages.”

What seemed like a far-fetched goal—$15 an hour—is now a reality at SeaTac Airport and in the City of Seattle, where low-wage airport workers played a leading role in winning the historic wage increase. In November, San Francisco became the third city in the U.S. to adopt a $15 minimum wage, and just this week, Chicago lawmakers voted to raise the Windy City’s minimum wage to $13. Since the first strike in 2012, more than 8 million low-wage workers across the country have gotten raises through local ballot measures, city and state legislation and contract negotiations, according to Fight for $15 organizers.