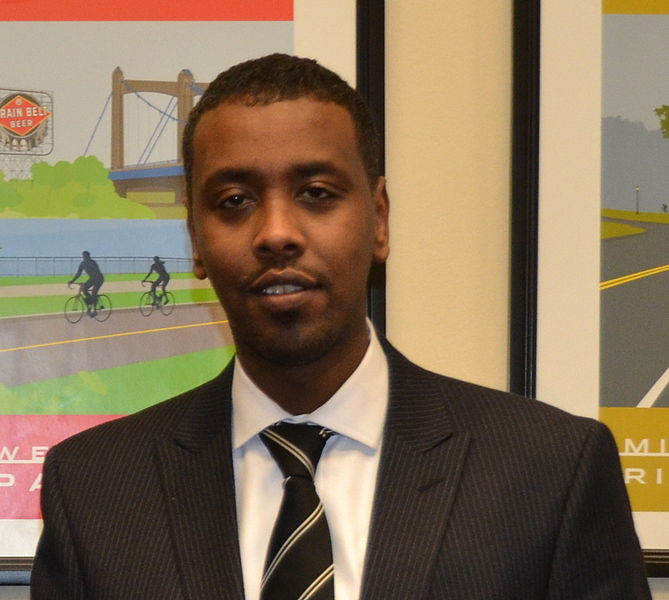 Photo by the Office of Keith Ellison. This photo is licensed under the Creative Commons Attribution 4.0 International license.

The Minneapolis City Planning Commission will hold a public hearing on Jan. 12 to decide on Council Member Abdi Warsame’s application for commemorative street names along the city’s Cedar riverside area. Warsame’s proposal calls for 4th Street South between Cedar Avenue and 15th Avenue South to be named “Oromo Street,” and for the stretch between 6th Street and Cedar Avenue to 15th avenue South to be called “Somali Street.”

The hearing is scheduled to take place at 4:30 p.m in Room 317 City Hall, 350 S 5th street in Minneapolis, Minn. The proposal is backed by the city’s Department of Public Works and the Department of Community Planning and Economic Development, according to the Commission’s website. The Commission’s decisions are final unless appealed.

For a city that boasts the largest population of both Oromo and Somali immigrants, such recognition would be a welcome development. The Cedar Riverside neighborhood is jokingly called little Mogadishu because of its large Somali residents while Minnesota is widely known as “Little Oromia” among Oromos. Home to the largest Somali population in the U.S., Minnesota has an estimated 40,000 Oromos. The Oromo are the single largest ethnic group in Ethiopia, constituting nearly half of the country’s 94 million population.

Warsame, who represents the city’s Ward 6, was elected in November 2013 after a spirited and bruising campaign that pitted him against longtime council member, Robert Lilligren.

“To the Oromo who has for so long remained invisible in its adopted home after home, a well-deserved recognition, and a breath of warm air in the thick of Minnesota’s bitter winter,” said Hassan Hussein, the executive director of the Oromo Community of Minnesota.

The public hearing announcement notes that the renaming would only be commemorative, meaning, “existing addresses won’t change.” Still, barring a legal challenge and other complications, Minneapolis may soon become the first city in the world, including Ethiopia, to have a street named “Oromo.”

Abdi Warsame was born in Somalia and grew up in the United Kingdom of Great Britain where he studied and obtained a B.Sc. in Business and a Masters Degree in International Business. He moved to Minneapolis in 2006, shortly landing a job in the financial sector.

Warsame was the founder and spokesperson for the Citizen’s Committee for Fair Redistricting, which took part in the redistricting process that aimed to create a more equitable and representative political map of Minneapolis, with the intent to create better opportunities for all residents of the City. The Citizen’s Committee lobbying was a historic success and today’s current map of the City including Wards 6 and 9 are a testament to their hard work.

When he was elected to the Minneapolis City Council in November 2013, Warsame became the first Somali-American elected to the council and the first in the nation to win a municipal election. He’s also the former Board Chair of the Cedar Riverside-Neighborhood Revitalization Program as well as the Executive Director of the Riverside Plaza Tenants Association.

Warsame is a practicing Muslim and lives in the Seward neighborhood of South Minneapolis.