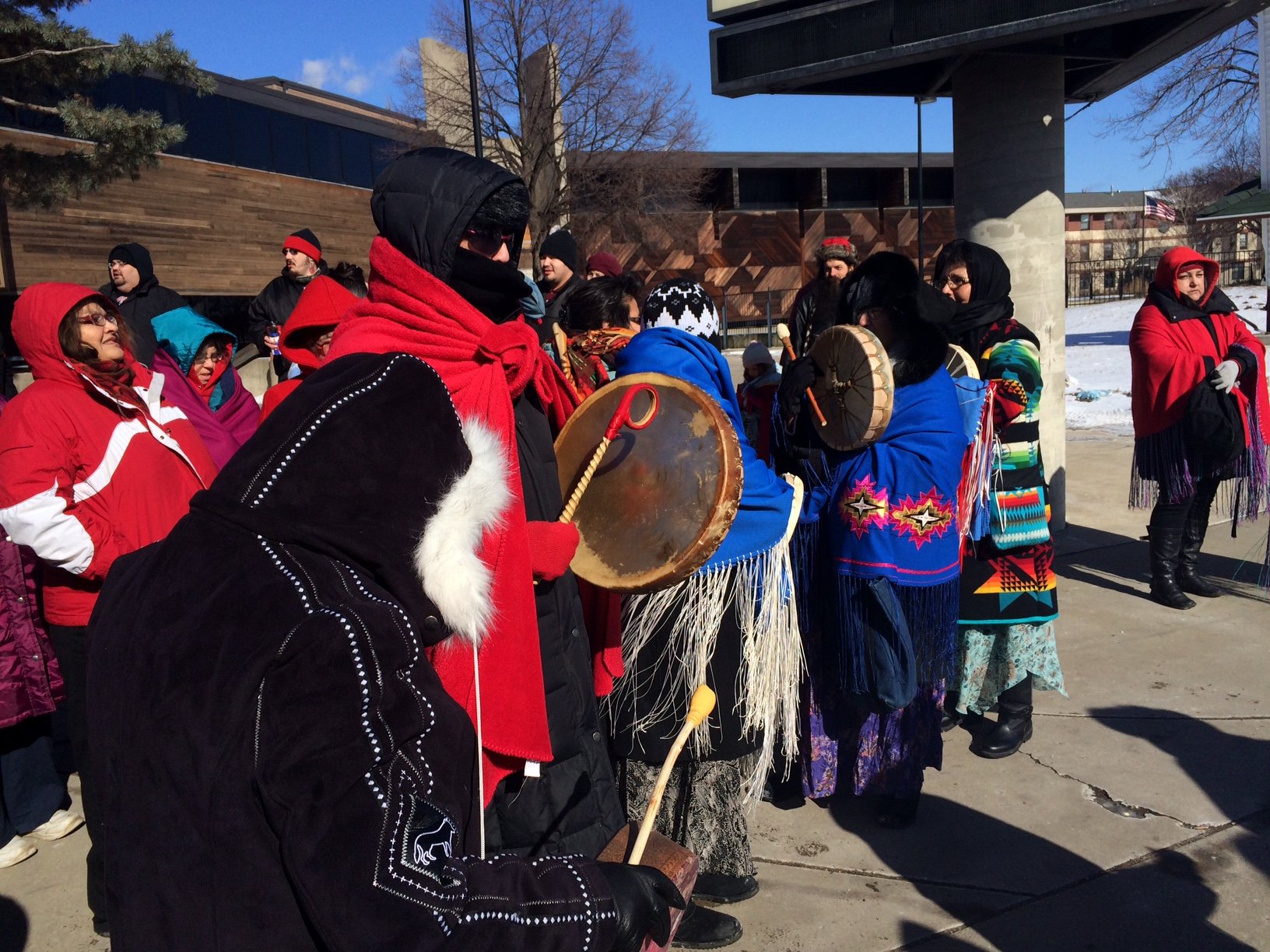 Marchers brave the freezing temperatures to honor Native women who are victims of violence or are missing. Photo by Minju Kim

On February 14, a group of Indigenous men and women in red shawls and colorful robes marched down Franklin Avenue in Minneapolis, undaunted by the cold weather. About a hundred participants gathered to remember of the lost members of their community.

The Annual Women’s Memorial March is held each year on Valentine’s day in Canada. It calls for the awareness of Missing and Murdered Indigenous Women (MMIW) across Canada and the United States. Sponsored by The Indigenous Women’s Net, Native Lives Matter Coalition and Idle No More Minnesota, Women’s Memorial March aims to bring awareness to the colonial and gender based violence upon indigenous women from North America. This is the first time it was held here in the Twin Cities with title Sing Our Rivers Red. In 2015, the event marked its 24th year with the support of the collaboration of Native American communities as well as local citizens in Minneapolis.

Sexual and domestic violence on and off the reservation are a huge concern. Recently, the University of Minnesota released a study that highlighted the growing problem of sex trafficking of Native girls here in the Twin Cities and in greater Minnesota. The Justice Department reports that one in three Native women are raped in their lifetime. Women here in Minneapolis wear red shawls to honor survivors of sexual assault and to raise awareness of these grim statistics.

Before the inauguration of the rally, members of the Women’s Memorial March Committee and the supporters gathered on the third floor of Minneapolis American Indian Center and shared the experience of those who had to lose their loved ones. Williamtte Hardy-Morrison was one of the members who lost her daughter many years ago.

My daughter went missing in August 1996,” she said, her voice poignant with painful memories. “I tried to report a file that she was missing, but I was denied by the police. They told me that she was an adult and she could go wherever she wanted to go, even saying that she might have been trying to get away from me, her mother. We could not find her for many years, and only in 2002 have I learned that she was murdered, shot by the police. Even after then, it took me six more years to get my own daughter’s body back to home.”

After the remembrance, the group started the march starting from the center and connecting into Bloomington Avenue and South Cedar Avenue. The freezing weather of 5°F felt even colder because of the icy wind and snow-covered streets, but it did not falter the energy of the participants. Singing the “Women’s Warrior Song” and drumming the traditional American Indian drum, the group marched on for an hour. The members of the Red Shawl Society also joined the march, wearing a bright red shawl decorated with purple and teal tassels at the end.

“The purple thread symbolizes domestic violence, and the teal tread symbolizes sexual violence.” Cristine Davison, a member of a Red Shawl Society, explained the meaning behind the colors of the tassel. “One out of every three indigenous women experience some kind of domestic or sexual violence. Red Shawl Society tries bring the awareness to the public how serious the issue is and to unite all the members who experienced the violence.”

Kotiareenia Tailor, a full-time student at Augsberg College, was passing by the rally and expressed her support. “Racism is not just a black and white problem,’” she said. “No one is free from the unjust system that discriminates the minorities in the society. I think it is great that they are voicing out their loses and opinions and try to expose the problems of the system. It is not easy, but worth it.”

While most participants of the March were women who share their identities as Native American, the event was open to everyone who wanted to support the issue of MMIW. For more information, visit https://womensmemorialmarch.wordpress.com/