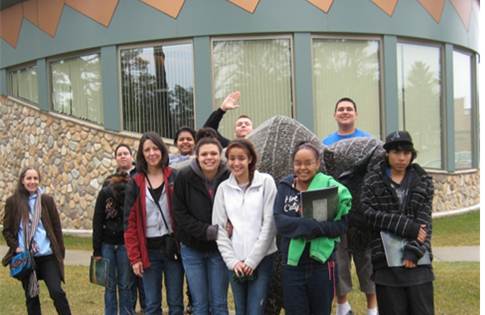 In 2012, just 25 percent of Native American students in the Minneapolis Public Schools graduated from high school on time. Graduation is the end of an education process that lasts at least 13 years. Two of the tools used by the district’s Indian Education department tackle shortcomings at earlier stages: training district teachers on “best practices” for working with Native youth, and offering a language immersion preschool program at Anishinabe Academy, the district’s Native-American focused magnet school.

This summer, Washburn High School teacher Ruth Thoorsgaard participated in the optional two-day training course offered by the Indian Education department. Thoorsgaard teaches U.S. history, and has a minor in Native American history. She said the program began with a “History 101” introduction to Native Americans in Minnesota, and moved from that to more intensive looks at language, cultural constructs, and how Minnesota’s seven Ojibwe reservations, which are in the northern part of the state, and four Dakota reservations, which are in southern Minnesota, came into existence. The following day, program participants toured various Native American sites in the Twin Cities.

Thoorsgaard feels certain that she will be incorporating what she learned from this training into her teaching. Especially useful, she said, was the second day, when her group visited “sacred sites,” such as the Mississippi river bluffs and the Dakota-centered Pike Island Memorial at Fort Snelling. In Thoorsgaard’s view, visiting these sites afforded teachers a more detailed look at Minnesota history by showing how the Dakota, who are a woodland and water-based people, lived as the state was forming. She “would love” to take her students to visit these sites as well.

Mary Ford, a first grade teacher at Anishinabe Academy also went through the training. Ford said the Indian Education department’s summer program was the “best training” she’s ever been to, and the most “profound” and “intellectual” professional development work she’s ever done.

Ford spoke about learning more than the simple translations of Ojibwe words, and instead being exposed to the cultural information embedded in the language. Like Thoorsgaard, she vividly recalls traveling to sites such as the Dakota internment camp at Fort Snelling, where some Dakota people were imprisoned during the U.S. -Dakota War of 1862. She said that hearing the Dakota perspective on such historical events gave her “deep knowledge” to share with her first grade students, and she said that these children “love” what they are learning.

Ford describes the first grade children she works with as curious, capable learners, but also said that poverty affects their ability to learn. Ford said that last year 40 percent of the students she worked with at Anishinabe Academy were homeless or highly mobile and without a permanent home. The level of disruption that goes along with this means many of her students cannot take full advantage of the culturally enriched work she has for them.

Addressing the “level of disruption” of poverty is a focus for the Indian Education program’s preschool education. In a High Five program at Anishinabe, four and five year olds spend the morning in a traditional preschool program, and then the afternoon in either a Dakota or Ojibwe language immersion class. According to Danielle Grant, before Anishinabe’s High Five program, many Native American children were significantly less prepared to start kindergarten than their non-Native peers.

With the High Five language immersion program, however, this “preparation gap” has disappeared—for those children who consistently come to school. Biiwaabik, who is the Ojibwe language immersion teacher for the High Five program, noted that, out of the twenty children who begin the program, a handful get dropped for lack of attendance. These children, Biiwaabik is certain, are suffering from poverty and its effects, such as homelessness and drug and alcohol abuse, and they miss out on the structure and stability the High Five program offers.

The success of both the preschool program at Anishinabe and the teacher training provided by the Indian Education department may offer hope for Native students and families looking for not only a culturally rich, academically solid education from the Minneapolis Public Schools, but also an increase in the high school graduation rate for their students.