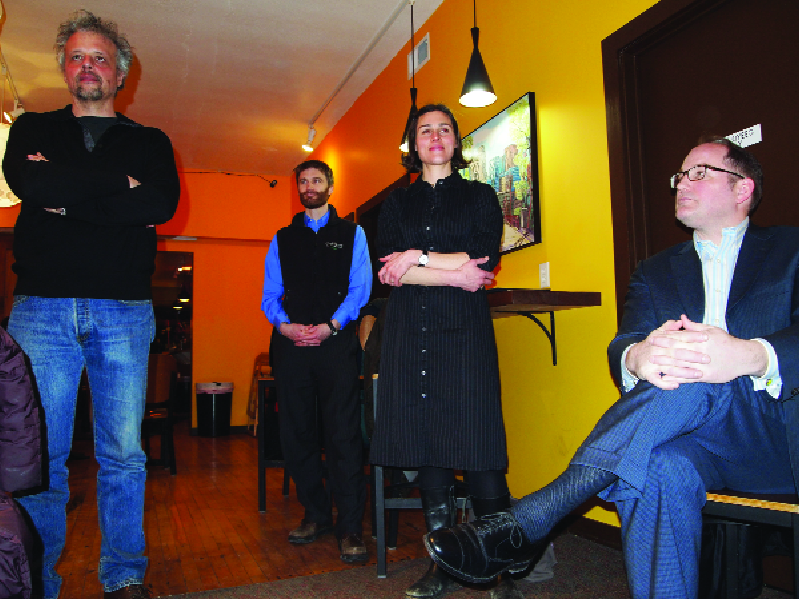 “What we’re doing now has to happen no matter who is in there,” said developer Andrew Volna. He’s referring to a list of things to stabilize the Hollywood Theater at 28th Avenue and Johnson Street NE. “It will not even be useful, but pretty.” It would be a huge leap for a tenant to imagine themselves in the space, Volna said, and the changes would help a tenant better envision their use.

The City of Minneapolis owns the theater, vacant since 1987, and in recent years has invested hundreds of thousands of dollars putting on a new roof, abating asbestos and stabilizing lead paint. Volna and consultants, coordinated by Meghan Elliott, have been costing out the repairs and site updates needed. They came to the Audubon Neighborhood Association meeting Feb. 3 to report and ask the board to support the most recent plan, “if not tonight, in the next month or so.”

In this plan, the City would sell Volna the theater. He would then invest $300,000 or more of his own money to do the repairs guided by the Minneapolis Historic Preservation Commission in a 2009 document, such as capping parapets, cleaning up the front and taking the boards off, restoring the ticket booth, and re-lighting the marquee, then proceed to market it to tenants.

Volna’s most visible similar success story was converting the Rayvic gas station for Clockwork Active Media at 1500 E. Hennepin. Clockwork has gone from a 400 square foot leased space, to outgrowing the Hennepin space, requiring an additional building which Volna took time out from the Hollywood analysis to get ready.

While Volna envisions an office use, the building has to look like a theater, and any change would have to be reversible.

That’s because, as Elliott said, the building has been nominated for the National Register of Historic Places, which has been approved at the state level, and sent on to the federal level where it is “on someone’s desk.” This designation may make it possible to obtain tax credits to make the redevelopment feasible.

She noted that during the pre-development analysis, some other positive things have happened, like the city bringing a new storm water separation pipe up to the building.

Volna said it was “critical to have been done this way so it wasn’t my personal Vietnam, getting in deeper and deeper. It’s exhilarating to be near the end. Quoting Donald Rumsfeld – now we are down to the known unknowns. There’s none that could be so enormous or cataclysmic as to doom what we want to do. It will be an expensive project. I know how much it means to the neighborhood…as your neighbor.”

From the beginning, Volna has stated he will seek a tenant use that’s consistent with existing zoning. At the Feb. 3 meeting he said he will not be seeking city or neighborhood money. Marty Schirber of Castle Home Services and a Northeast resident, reminded Volna that the project had received city “Great Streets” façade grant money. Volna amended his remarks to mean [my paraphrase] “no special/additional money,” that if grants or credits are available they will be applied for.

An individual who said he used to be a city planner with a “good BS detector” said he has “seen a lot of sleazy real estate developers, and there’s no crap being thrown at us here.” Former neighborhood president Nic Baker said he’d like to see activity at the site, “I don’t care what goes on in there.” Jenni Horton said “we’re going to have to trust somebody.”

Dahli Langer echoed, “I was thinking the same thing” as the group recalled how, as Gavin Watt put it, “in the past, running past this neighborhood has foundered many ships of development.” Still, Watt said, gesturing toward where Council Member Kevin Reich was sitting, it’s “terribly, terribly vague. Smacks of the Council with secret meetings and stadiums, New Jersey developments.”

Someone asked about the empty land across Johnson at 28th Avenue NE. Miles Mercer, the project manager on the city’s behalf, said they envision it as multifamily property. A former gas station site, in the early 1990s, the city cleaned it up to a point. A higher level of remediation would be required if it were housing.

For “lack of staff bandwidth” the city hasn’t actively marketed the half-acre property recently (many years ago a housing developer was chosen but went away when condo units failed to sell). However, it is listed for sale on line, Mercer said, asking $200,000 for the equivalent of five residential lots. “We haven’t seen indication that the market’s ready for it,” Mercer said. “We would not just sell it, but find out what they would do with it. There needs to be a viable plan to actually build, not to hold.”

Reich said he would want the land to work as a package with the Hollywood. Schirber said, “The Hollywood Task Force has always said not to sell the lot until the Hollywood happens.”

The task force recommended buying the house next to the theater because the theater was landlocked without it. That alone cost over $200,000, Mercer told the Northeaster. “The Task Force has done a lot to move it into a development situation.”

“So you believe that the building is habitable,” asked Toni Watt.

“I believe it can be taken out of hospice care,” Volna said.

The City Planning Commission’s Committee of the Whole will look at the Hollywood proposal as a land sale to see if it is consistent with the City’s comprehensive plan, on Feb. 20. It should advance to the Planning Commission consent agenda March 3. The Community Development Committee is scheduled to consider it March 18 and the full council March 28, though it’s possible it could be delayed a cycle or two.If it passes the council the contract for sale would be drawn up and a closing scheduled.