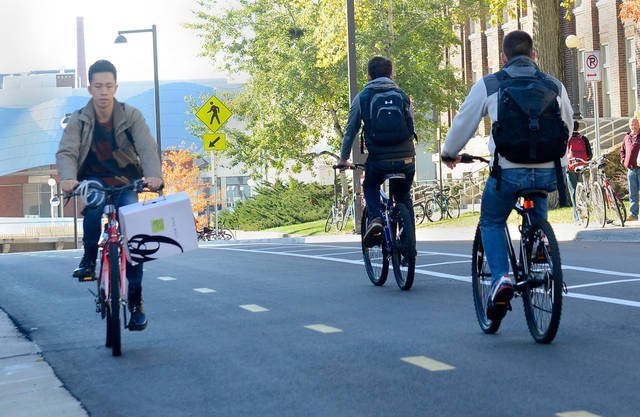 Protected bike lanes are a hot topic for city and county planners this fall.

Minneapolis Mayor Betsy Hodges’ proposed 2015 budget allocates $750,000 for protected bike lanes throughout the city, and Hennepin County released a draft of its bicycle transportation plan earlier this month that calls for hundreds of miles of new bikeways by 2040. Local government officials say more bike lanes will promote livability and sustainability in the area.

But protected bike lanes, which separate bikers and motorists with barriers like pillars or concrete walls, aren’t coming soon to the University of Minnesota area’s bicycle system, city and county officials say.

“There’s nothing definite at this time,” said Simon Blenski, a bicycle planner for Minneapolis.

The two closest protected bike lanes in the works are a nearly one-mile downtown stretch on Washington Avenue South and another project on the Franklin Avenue Bridge, he said. Both are slated for completion in 2016.

Minneapolis plans to add 30 miles of protected bike lanes by 2020. The county’s draft plan would also add an average of 20 miles of traditional bikeways per year for the next 26 years.

Steve Kotke, director of Minneapolis’ Public Works department, said adding more protected bike lanes will increase ridership for what he called “B” riders, or those who bike but aren’t enthusiasts.

“The A riders are the ones that are quite confident and don’t even rely on bike lanes,” he said. “But the B riders, which is the more casual group, are the ones that we really want to encourage [to bike] through facilities where they feel safe.”

Another gap located on Pleasant Street Southeast is one-third of a mile in length.

Kotke said increasing bicycle ridership can help improve the environment and Minneapolis’ livability. Getting outdoors is also a big motivator for many people, he said.

Protected bike lanes would help promote year-round use, since crews could more easily clear them of snow, said Ward 2 City Councilman Cam Gordon, who represents the University and surrounding areas.

Kotke said Public Works is working on a study to identify which areas would benefit from protected bike lanes. He said he expects those areas to be identified in the next several months.

The county wants 90 percent of homes to be located within a half-mile of a bikeway by 2040, Yemen said.

Hennepin County’s plan also calls for almost half of the proposed 536 miles of bikeways to be off-street, in an attempt to create a better network of trails between Minneapolis and other cities, Yemen said.

The county is accepting public comment on the plan until Dec. 5.