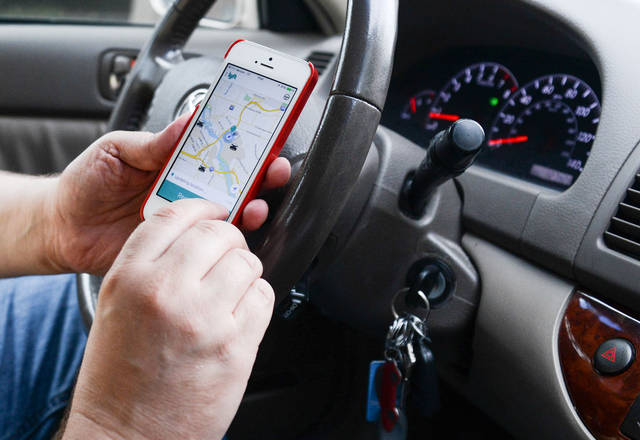 (Photo by Holly Peterson) Lyft driver Ben Leadholm, who's worked for the ride-sharing company for four months, demonstrates how to find other Lyft cars on Monday in Minneapolis. City Council voted to legalize Lyft and other transportation network companies Friday.

Minneapolitans can officially add ride-sharing companies to their ever-growing list of transportation options after the City Council passed an ordinance last week permitting the legal operation of businesses like Lyft and Uber.

Council members also voted to relax the city’s taxi regulations at the same meeting on Friday.

In doing so, the council drew a distinction between the city’s existing taxi industry and the new model of transportation network companies in which drivers use their own vehicles to chauffeur passengers who request rides through a mobile phone application.

“We recognize these things are different,” said Ward 3 City Councilman Jacob Frey, who represents neighborhoods around the University of Minnesota. “This is a new business model, and we need to take a new approach.”

The ordinance, widely backed by companies like Lyft and Uber, will allow transportation network companies to operate for an annual fee of $35,000 and require annual inspections, which are $135 per vehicle if the city does the inspection. The companies will also incur a $10,000 wheelchair surcharge.

Previously, no city laws existed to regulate ride-sharing companies, Ward 5 City Councilman Blong Yang said, leaving them in a legal gray area. Yang, who gave the ordinance its sole “no” vote last week, cited the companies’ “illegal” entrance into the Minneapolis market as a primary reason for his opposition.

“They are currently operating unlawfully, and basically it seems like we are saying, ‘That’s fine, we’ll make laws that favor you,’” he said at the meeting. “If we do that, we’re setting precedent for the future.”

But other council members like Ward 6 City Councilman Abdi Warsame, pointed out at Friday’s meeting that the ordinance was the first of many steps to integrate and regulate transportation network companies in Minneapolis. A condition of the ordinance requires the City Council to review the new rules in a year.

Few other places have regulated ride-sharing companies, but a majority of council members said at the meeting that despite some reservations, they would prefer to pioneer a fluid Minneapolis ordinance rather than wait to follow the example of other U.S. cities and states.

“We need to take that big step forward,” Frey said.

“We need to lead the way. We can’t shy away from progress simply because a few other cities haven’t done it yet.”

The council also met on Friday to discuss relaxed regulations on Minneapolis taxi cabs, voting to loosen requirements on vehicle inspections and drivers’ record-keeping and to permit drivers to park in residential areas and operate older models of vehicles, among other measures.

While some at the meeting said these changes created more equal regulations of taxi and ride-sharing companies, Yang pointed out what he described as problematic differences between the two business models, including how they’re allowed to set their rates.

“What I think we’re seeing is a new model and what we’re facing is resistance to change,” Warsame said at the meeting.

Lyft driver and part-time Carlson School of Management MBA student Mallory Kurkoski said that while further revisions to the ordinance may be necessary, drivers are satisfied that it passed and that they can continue working.

“These drivers are part-time drivers,” she said. “They’re not necessarily people who are going to want to go through all of these hoops to do it.”

Kurkoski said she mainly works near the University of Minnesota, where she said safe rides home have become valuable after last fall’s wave of crimes near campus.

“It makes me feel good as a ‘U’ undergrad alum and current student there to be helping out people to make sure these attacks don’t continue,” Kurkoski said. “It’s only making it safer. Having all of these options is better than having nothing.”

Because ride-sharing drivers can choose whether to accept or deny requests for rides, opponents like Yang say that can give them “a license to discriminate.”

But representatives for both Lyft and Uber said the service’s application allows users to remain anonymous and that the companies monitor drivers who continually ignore requests. Additionally, each driver garners a rating that is affected by both customer reviews and the number of requests they accept and deny.

“As a taxi, there is no way to measure [discrimination],” Kurkoski said.

Because rides from companies like Uber or Lyft are always funneled through a mobile app, denied rides are tracked and discouraged.

“Our system, I feel, roots out discrimination a lot better [than a taxi],” she said.

Ride-sharing compliance with the Americans with Disabilities Act has also been an ongoing concern.

To address that concern, Frey added a $10,000 fee for ride-sharing companies as part of the new ordinance, which will go toward a single program that exclusively handles ride services for people in wheelchairs.

“You call one number and you will get service that is fully ADA-accessible,” Frey said.

The taxi ordinance also added a provision requiring that cab companies be able to accommodate people in wheelchairs or pay a surcharge.

Despite Frey’s confidence in the proposed solution, Yang said he was unsure it would truly ensure a necessary number of wheelchair accessible taxicabs 24 hours a day.

While council members agreed some issues have yet to be straightened out, Uber General Manager Kenny Tsai said he’s pleased that the company can begin its legal presence in the city.

“I think Minneapolis is a great example of how a city can be receptive and embrace innovation versus stifling it,” he said.