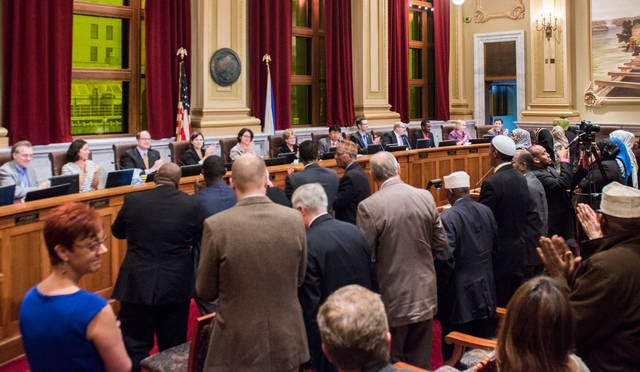 Minneapolis became sisters with a Somali counterpart on Friday — becoming the first city in the country to do so — in an effort to strengthen international ties with Somali-American residents.

“What I saw in that chamber was a community [of members] who identify themselves as Somali-Americans who want to redefine the Somali identity,” Salah said.

Abdikadir Ali, a Cedar-Riverside resident who left Bosaso in 2012, said the family he knew back in Somalia celebrated the news.

“The day that the twin sister news happened, it was like a World Cup championship,” he said through an interpreter.

Ali is one of many Cedar-Riverside residents who moved to Bosaso, the third-largest city in Somalia, before immigrating to the United States.

“It’s the safest place in Somalia after the civil war, a place where you can sleep at night without fear,” he said.

There are many social ties between the two faraway regions, said Ahmed Ismail, who coaches a youth soccer league in the neighborhood and is the executive director of the West Bank Athletic Club.

Ward 3 City Councilman Jacob Frey, who represents the University of Minnesota and surrounding areas, was enthusiastic about the measure.

“Somalis contribute to the vitality of our city, and it’s wonderful to have this shared symbolism,” he said. “It’s really a historic moment.”

The Sister Cities International program, which formally accredits the relationship between Minneapolis and Bosaso, provides for exchanges between the two cities. Minneapolis’ 11 other sister cities include Uppsala, Sweden, and Santiago, Chile, which was the first city to connect with Minneapolis.

Mohamed Jama, general director of the Cedar Riverside Youth Council, said he hopes the initiative will allow for international exchange programs between the two cities.

The city anticipates the new partnership will lead to student and civic-leader exchanges, and fundraising efforts for Somali students.

“Most students here don’t know about their heritage,” Jama said. “It would give students here some perspective on where their parents are from and emphasize the need for education in developing countries like Somalia.”