Last year, the Garden Gleaning Project delivered 7,334 pounds of “gleaned” produce to two local food shelves: Little Kitchen Food Shelf in Northeast Minneapolis and Waite House in South Minneapolis. The cost for the fresh and healthy produce from community gardens: only their volunteered time. Because of their success, the Emergency Foodshelf Network recognized the food shelves with an award for their innovative programs.

Jared Walhowe, Gleaning Coordinator for the Garden Gleaning Project, along with the help of three neighborhood coordinators will be facilitating relationships between food shelves and their nearby community and home gardeners.

“Together we encourage gardeners to donate their unharvested produce and to plan ahead and “plant a row” of food for their local food shelf. No donation is too small,” Walhowe said.

Working with their partner food shelves, they will develop a list of foods that if grown and then donated will be most useful for that particular food shelf community.

Another big aspect of the project is creating a gleaning model that can be replicated elsewhere.

“Ideally this project will be scalable, growing slowly and sustainably to ensure that the partnerships we forge are long lasting,” Walhowe said.

“The work we are doing sources healthy and local food for food shelves and it does it in a way that builds relationships, creates understanding, and utilizes the vast set of skills, resources, strengths and competencies of individuals in our communities.

A community that grows its own food and has community members that know one another well is far more resilient than one that doesn’t. In my opinion, the closer we are to our food the more likely were to make the healthy decisions necessary to thrive,” he said.

Last year’s success allowed for some start-up funding this year. The project will be partially funded through Hennepin County Human Services and the Public Health Department, which received funding from Blue Cross and Blue Shield of Minnesota as part of Prevention Minnesota. Prevention Minnesota is Blue Cross’s long term health improvement initiative that works to tackle the causes of preventable heart disease and cancer.

For the Little Kitchen Food Shelf in Northeast Minneapolis, demand for food has never been greater. According to Jennifer Schultz, food shelf manager at the Little Kitchen, the food shelf served twice the recipients in 2011 than they did in 2010 which amounted to close to 6700 individuals. Almost 50 percent of those numbers are children, with the majority under 12. 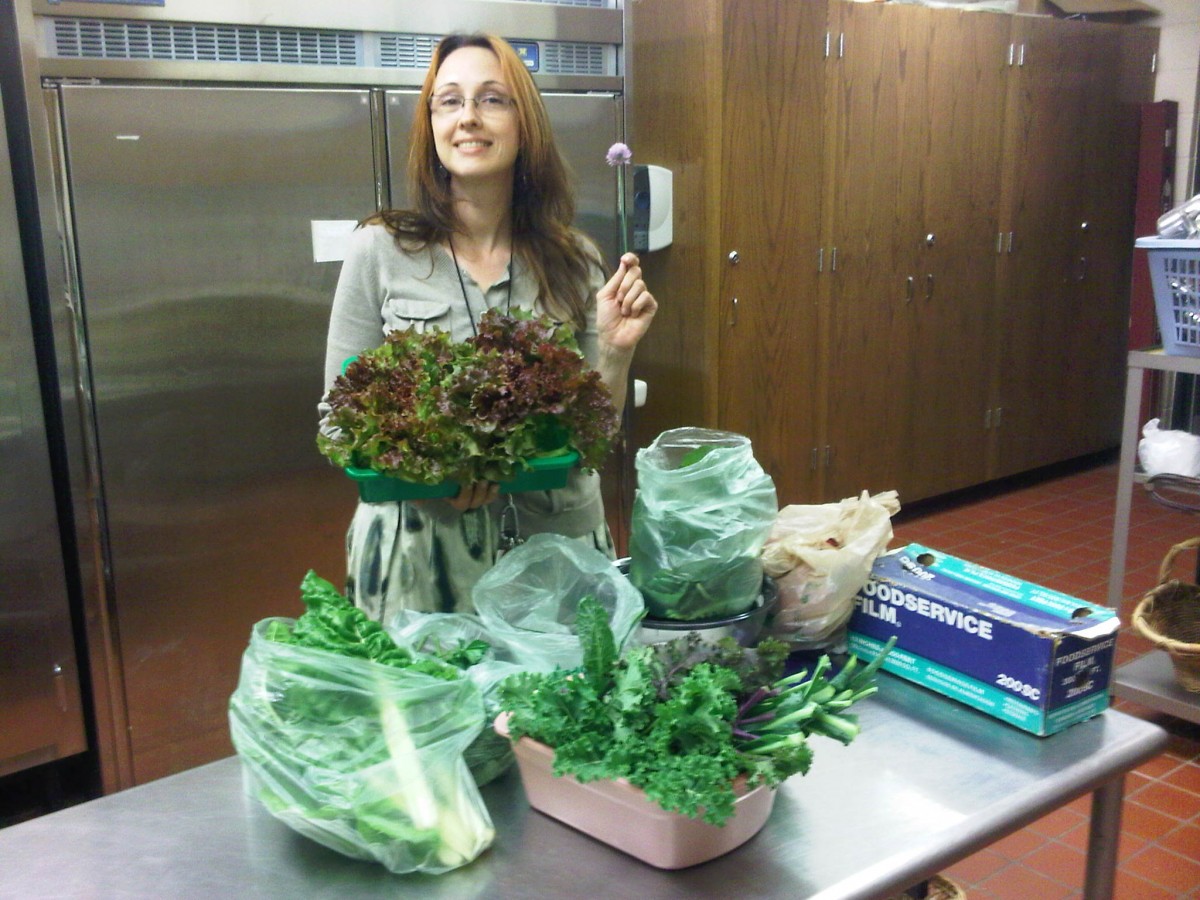 The first harvest from Grace Gardens in 2011

“We are probably the second largest food shelf in Northeast if you don’t count the senior food shelf which only serves people over 55,“ she said.

This year thanks to the Garden Gleaning project they will offer fresh produce five days a week all year long.

Last year some of the produce donations came from Eastside Food Coop, Emergency Food Shelf Network and Sisters’ Camelot. In addition, their Little Grace garden grew about 300 pounds of produce using two raised beds and some trellises. This season they hope to increase that amount to 1000 pounds of produce.

In the past food shelves had not considered stocking produce for various reasons but today there are more wholesalers and food banks that have developed a commitment to what’s been termed as “the healthy food shelf movement. “

Food banks currently get food donated to them in quantity by producers of food who have extra food that they need to move. This is usually food that doesn’t sell, is past the sell by, freeze by date to sell, and food that was produced in too much quantity and cannot be sold through the regular retail chain. The producer or wholesaler is donating it as a write-off to help recover their profit. Although the food is safe, it is of a lower nutritional value and higher in sodium and calories.

One of the commitments Little Kitchen has made to improve the quality of the food is to promote healthy food drives and to increase the amount of produce they receive to guarantee a better level of nutrition for people who are regularly dependent on food shelf assistance.

“Our clients have caught on very quickly that this stuff is good and they are willing to try new things. People who have grown up in poverty have had so little access to produce and have a difficult time identifying it or even how to eat it. We try to give lots of recipe cards out,” she said.

In the future, Little Kitchen plans on giving cooking and preservation classes once they get a licensed kitchen. They are also working on providing households with gardening mentors who can show clients how to grow their own produce. 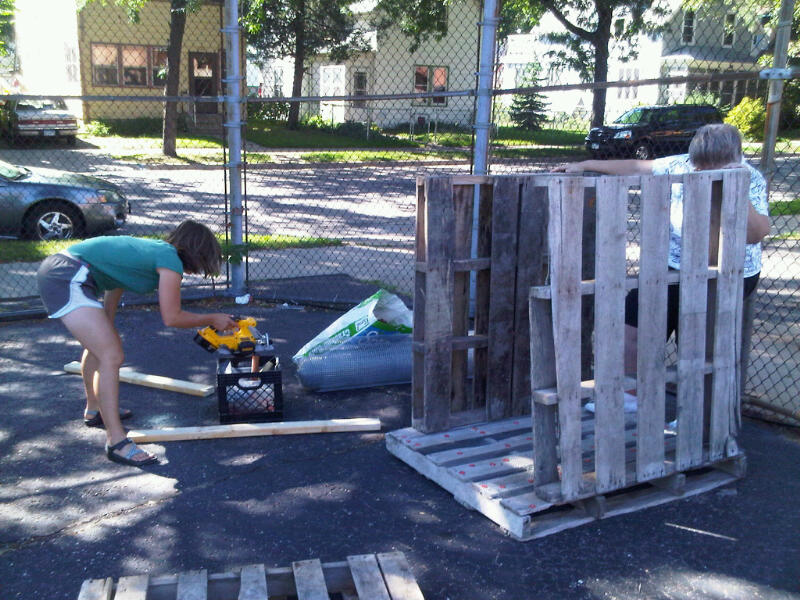 Building a compost bin with the help of Gardening Matters

The biggest obstacle for the Garden Gleaning project is transportation. Donations need to be delivered to the food shelf by the grower and arrangements made ahead of time.

According to Schultz, “Gardeners were enthusiastically responding to the notion that they could bring the stuff to the food shelf and that was a very pleasant surprise.”

“We understand that Food Shelves are a band-aid. They are not a solution,” she said. “Ultimately we’d like to see people who are living with food scarcity become empowered to change that situation and that includes education.”

Beth Breiter, one of the community gardeners who donated produce last year, said, “I was surprised that a food shelf accepted fresh produce. I thought that was terrific.”

“It would have gone to waste,” she admitted. “Sometimes your neighbors just don’t want any more of you zucchini.”

“I once delivered a van full of apples and the food shelf manager told me that it was gone that night. It surprised me so much. There is so much need,” she said.

Her father, who also has a huge garden, contributed his produce as well.

Breiter said, “My mom just didn’t want to can that many tomatoes. My dad was thrilled to give it to the food shelf. It was a win-win all around.”

She encourages gardeners who have extra space in their garden to plant an extra row. They should also contact the local food shelf to see what specific crops are popular.

According to Walhowe, “Access to healthy food is a determining factor to the health of a community. This project works to change our collective dialog from a perspective of scarcity to one of abundance. There is food everywhere in our communities. Where there isn’t food we can probably work to change that. There is a great opportunity to divert food from the waste stream and build community while we do it.” 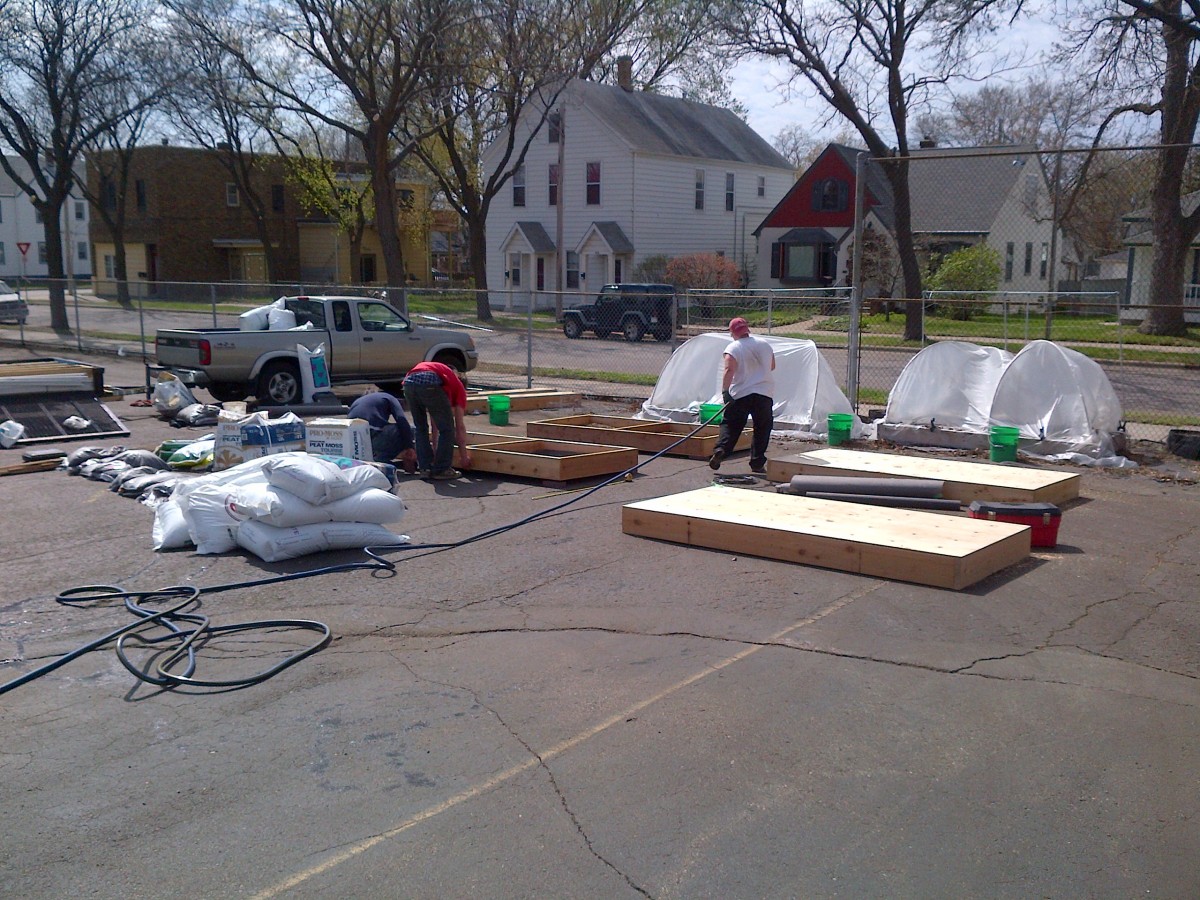