In a veritable bacchanalia of developments, we have seen three major inter-related activities in Minneapolis’s Downtown East:

Washington Avenue has been covered extensively on Streets.MN already, so I won’t go further into that now. The others are the Star Tribune site and the Stadium.

The Ryan proposal for redeveloping the Star Tribune site is the best of the bunch, and their renderings are also much nicer. The “Yard”, as the park on the site has been dubbed, does a few good things. 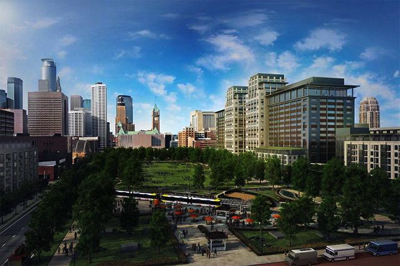 It also does some problematic things

I think it nets out as a good thing given the existence of a large stadium at one end. Closing Park and Portland are far more feasible than closing 4th St or 5th St. It reduces some vehicular access to the Mill District from the South (and Eliot Park from the North), and goes against the aim for better connectivity. On the other hand, reduced connectivity will reduce total vehicular travel (which is a good thing from an environmental perspective, and a bad thing from an economic activity perspective). Some have suggested that they just be closed part time, e.g. during events, and be shared space the remainder of the time. Others have suggested they stay closed, just like in Central Park. Nevertheless, the effects here will be relatively small.

The issue of “Wells Fargo” as a tenant is interesting. Presumably this is just a consolidation for them, as they already have facilities in town, so would just create vacancies elsewhere. Good for downtown, bad for the owners of the older space elsewhere. A win for the city would steal business from another city (which is still just a transfer). A win for society would be the growth of new business. Also there is a certain irony in that this would be the mortgage division, which got into trouble in the last building boom by over-financing new construction. 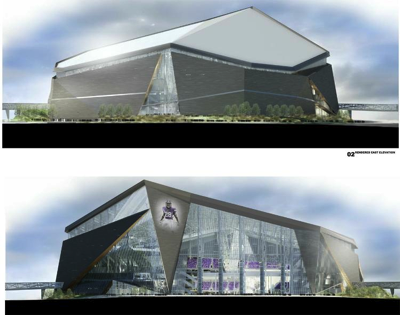 Well aside from not liking the idea of the Stadium, and its location in downtown being a strategic error on the part of the city and state’s political leadership, it could be worse. I am not as pessimistic on it as Nate. This is an improvement over the Metrodome from an aesthetic perspective. The glass facing West and South will be iconic, though a bit starchitecture-like. That it turns its back to the North and East makes sense given the land uses in place there (a freeway entrance ramp and LRT tracks). Yes it forecloses the opportunity to do something better there, but that wouldn’t be happening anyway, this is Minneapolis not Manhattan and there is just not the demand now (or for the next 20 years) to do something with good urban design in these forgotten marginal spaces, there are still too many better sites. Yes I would like more glass and less wall, but I am sure that costs money. Like the Saints Stadium in St. Paul, it is wedged into a corner backing onto the transportation network and fronting the city, that they don’t do anything with the back is no great loss.