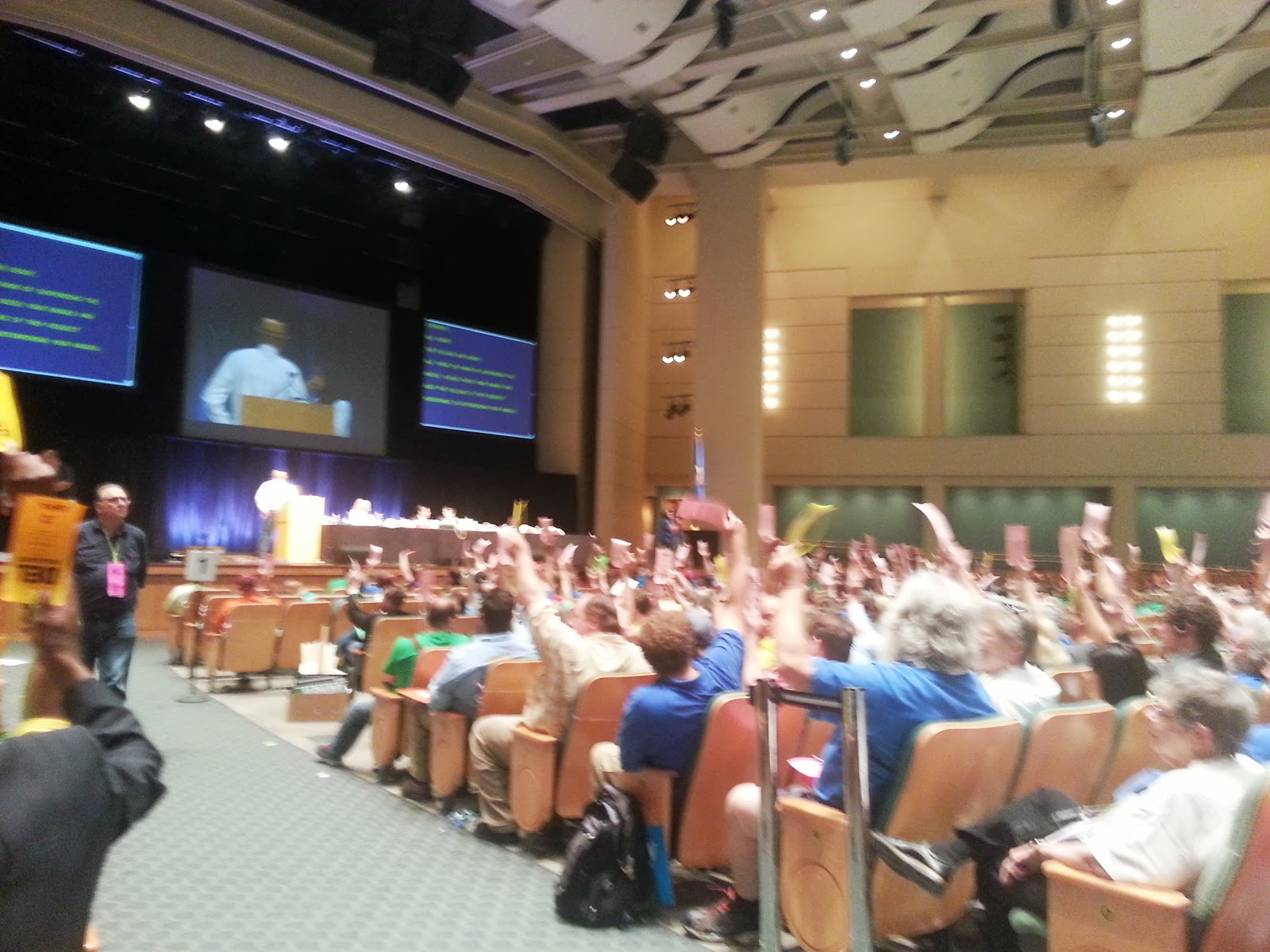 I went into Saturday’s Minneapolis DFL convention as a strong Schiff supporter, and we all know how that turned out by now. So what follows is not neutral, although I’ll do my best to be even-handed.

There is a physical phenomenon called an “event horizon,” in which an object cannot be affected by an outside observer. The object is being pulled by a gravitational force from which escape is impossible. From an observer’s standpoint, the object appears to slow down and not move at all, while the object itself experiences events in real time. Event horizons are most commonly observed at the point of no return of a black hole, but can also be experienced by attending a citywide DFL convention.

The “event horizon” for me was when one minute turned into forty-five, which astute observers already know happened when Gary Schiff asked to address the convention for one minute as he withdrew from the endorsement and threw support behind Betsy Hodges. For a good ten minutes prior to that happening, floor staffers for Mark Andrew’s campaign were running up and down the aisle motioning for a thumbs-down vote on…whatever was coming next. The speech would have required a suspension of the rules, needing a 2/3 majority to pass. A voice vote was fruitless, as raised voices made it impossible to ascertain such a majority. Delegates were then asked to hold up their badges. The chair graciously surmised that a sufficient number of delegates supported allowing a sitting elected official who was still in the running to speak for a brief moment.

And then an Andrew delegate called for a hand count. That took over half an hour to count, and was the moment when I lost all support for a campaign that would disrespect an opponent, and more importantly, disrespect the time of well over a thousand delegates in such a way. It was a classless, tactless, bullying, egotistical move that should not be forgotten. In the rough-and-tumble machinations of conventioneering, one could almost forgive such a maneuver if it accomplished anything whatsoever.

But Schiff still spoke, just outside the convention instead of from the floor. He still threw his support behind Hodges, and the coalition still managed to block an endorsement. He still got press coverage for his speech. So the only thing that Andrew’s move did was that it kept an opponent from speaking from one particular locale and it wasted well over half an hour of time for the delegates, volunteers, and paid staff working the event. That’s roughly 1,500 people who lost about forty-five minutes of their lives over that–a cumulative total of 1,125 hours.

That’s 1,100 hours that could have been spent with families, or enjoying a summer day. How much difference could we see in our communities with 1,100 hours of volunteering? The keyboard cat video could have been watched 70,000 times. Quite literally anything would have been more productive than what delegates were put through. Instead, one candidate stopped another from speaking for sixty seconds. Temporarily. Whew! Close call there!

Time dragged on in two other key ways. It took six and a half hours from when registration opened to when the first ballot was even cast. That’s probably the amount of time many people have to commit to the convention to begin with. And that’s how long it took just to cast one vote. That doesn’t even factor in counting the vote, mind you.

This account, by the way, doesn’t consider the balloting for park board and board of estimates and taxation, both of which were handled quite smoothly by the delegates and chairs, and graciously and efficiently by the candidates themselves.

And then the third ballot–which should have been the easiest to count so far, as the choices were Hodges, Andrew, and no endorsement–took roughly two hours to count. Tallying the first vote with seven options (Andrew, Hodges, Schiff, Cherryhomes, Samuels, Thomas, or no endorsement) took only a fraction of the time. The layperson wonders how it can take that long to tally about 1,200 votes divided into three possible categories. How many delegates did we lose during that delay? Out of the ones who stayed, how many didn’t have the time or stamina to grind out a full five ballots?

Couldn’t we have just agreed, after the second ballot showed that nobody was even close to the requisite 60%, to all go home and enjoy the day, realizing that an endorsement was a statistical impossibility? No, we could not.

And so we trudged along the political event horizon, each side trapped in a parliamentary Chinese finger trap. The harder each side pulled towards their goal, the more intractable any escape became. We couldn’t adjourn without casting five ballots. Endorsement at 60% was a mathematical impossibility. But to openly acknowledge such realities would be tantamount to conceding defeat. Throughout the rest of the year, Democrats wring their hands and wonder why more people don’t participate in these party machinations. But not on this day. No, today we all knew.

The spirit of the final two (okay, 1.5, since the last ballot did not have a quorum and did not count) was summed up perfectly by fellow blogger Ed Kohler of The Deets. After the fourth vote, at 10:00 and after fourteen hours, and moments before we got the word to walk out, he said to me, “I’m thinking of getting someone wearing an Andrew shirt to switch sides. Who looks persuadable? Come on, I’m feeling really good about this.”

That moment of sarcasm captured perfectly why I had no qualms about leaving, even though blocking a quorum is technically a much bigger deal than keeping someone from speaking. Part of the political calculus of any floor campaign for endorsement is knowing that as some people go home, hopefully enough of your delegates and alternates will stay, thus resulting in a 60% threshold. On Saturday, by the fourth ballot or perhaps earlier, that became the *only* strategy. When candidates are no longer even putting up a pretense of winning the hearts and minds of delegates, and are instead focused only on endorsement by attrition, the process is fundamentally broken.

So how do we keep that process from breaking in the first place? I’ve kicked around a few rules changes and other tweaks. But making minor alterations to this particular disaster seem kind of like dubbing a Stephen Seagal movie into French to make it seem smarter, and then adding English subtitles so that it’s more accessible. That’s an awful lot of effort that doesn’t change the core of what was fundamentally inferior to begin with.

Rule number one: skip the minor stuff on the day of the convention. This may mean dividing things up over two days so that the agenda and rules are adopted on a Friday night instead of Saturday morning. But most people want to show up to vote only on the big ticket items like the mayoral race. Make Saturday encompass three things: registration/credentials, candidate speeches, and voting.

While we’re on the topic of voting, here’s rule number two: Invest in clickers or tablets or voting booths or psychics or something that will allow delegates to quickly make their opinion known and counted. If votes could be tabulated almost instantly, we could then give candidates a fifteen or twenty-minute period in which to convince undecided voters or otherwise strategize about what their next move would be. They could even address the floor for a damn minute if they so chose. Crazy, I know.

But if we could get to the voting quickly, and hammer out vote tallies in rapid succession, that would go a long way towards creating endorsements (or non-endorsements) based on the candidates winning the hearts and minds of delegates. Which is what the endorsement process should be.

If we can’t do even that, then maybe it’s time to consider options that are even more extreme. If RCV will allow up to three votes per person, then why not allow for three or at least two DFL-endorsed candidates? And why not just use an average of several ballots to determine who those people are?

Assuming we go the route of minor changes, then let’s put a TV and closed captioning right outside the floor and next to the credentials/registration lines. That way as delegates are registered, confirmed, upgraded, or otherwise verified, they can see what is happening and make informed decisions when they are on the floor. Oh, and food trucks. If we’re going to be there all day, let’s get some food trucks to circle around from time to time. Who would even need to break quorum for a pizza then?

All I know for sure is that if we keep things the same, the party endorsement process will remain an “event horizon.” To outside observers, we will appear stagnant, stale, and unmoving. But all this busy work we do will convince the insiders that the process is going along great. And that’s no way to endorse a candidate.