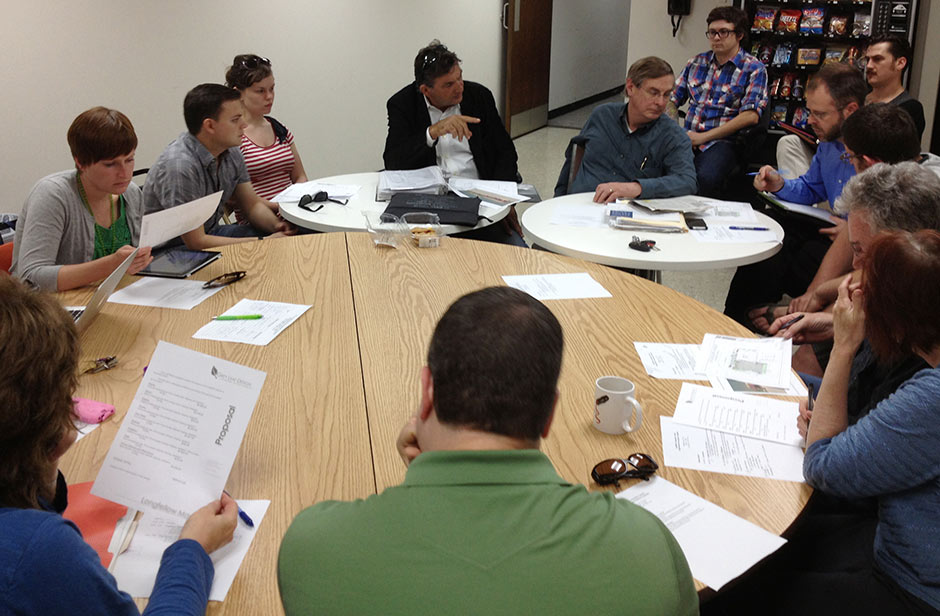 The Neighborhood Development Committee reviews the landscaping budget for the Longfellow Market. Ahlstrom has asked the NDC to fund the costs of enhanced landscaping.

The new grocery store planned for East Lake Street, the Longfellow Market, is progressing as planned, according to owner Joel Ahlstrom.

Last night, he and architect Mike Mularoni met with the Longfellow Community Council’s Neighborhood Development Committee to provide a project update and request funds from the NDC to cover the expenses of additional landscaping and awnings for the front of the building.

The project was recently funded with two bank loans, and demolition of the interior of the building has begun. Unfortunately, the roof has begun to leak, so repairing the roof is underway as well.

A minor snafu with a tenant of the building was discovered on Friday – when Ahlstrom purchased the building, the owner believed that his tenant of 34 years was under a month-to-month lease. In actuality, he’s under a year-to-year lease that ends next spring. Ahlstrom is working to help the tenant to find a new space, since the building is slated for demolition. Until that happens, they will be tearing down the building in sections, which is scheduled to begin in July. 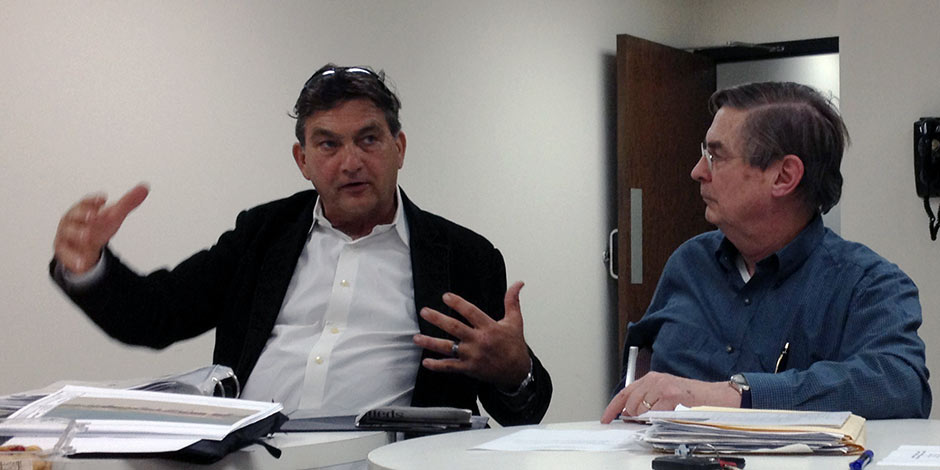 From left, Mike Mularoni and Joel Ahlstrom at the LCC’s NDC meeting. The two say that plans for the grocery store are moving forward. Interior demolition has begun. Demolition of other buildings on the property are scheduled to begin in July.

Ahlstrom has requested funding from the NDC to cover the cost of enhanced landscaping and awnings, which he believes will help make the grocery fit nicely into the Longfellow neighborhood. He commented, “I’m not a developer, I’m a grocer, but I do have good taste.” He added, “I’m going to give this neighborhood a store like none other.” The total cost of the two items would be approximately $30,000.

The hand-cranked awnings could be extended or retracted by Ahlstrom and his staff on a day-to-day basis. Architect Mularoni said that the awnings will keep the space from looking too industrial.

The enhanced landscaping would provide decorative fencing to coordinate with the neighborhood, plants, and pervious pavers for the parking lot, which would provide stormwater management.

Currently, the NDC has approximately $35,000 in its funds to use for neighborhood development projects. The committee is considering funding the landscaping portion of the project, and has requested that Ahlstrom apply for a facade improvement grant from the Lake Street Council to cover the cost of the awnings.

The NDC will decide if it will fund the landscaping project at an upcoming committee meeting.