The Minneapolis City Council approved a resolution on Friday [May 23, 2014] declaring June to be “Lesbian, Gay, Bisexual, and Transgender Pride Month” in the city of Minneapolis.

The city has recognized Pride, either as the month of June or the last weekend of June, for several decades. The first such declaration came in 1975, but for a few years after, conservative factions on the council blocked such declarations.

This year, each of the 13 members of the council signed on to the proclamation, and it recognizes the legislative advancements of marriage equality and safe schools that were won in the last two years.

Declaring June 2014 “Lesbian, Gay, Bisexual, and Transgender Pride Month” in the City of Minneapolis.
Whereas, Minneapolis was the first city in the State of Minnesota to prohibit discrimination on the basis of sexual orientation and gender identity/expression, a position subsequently adopted by numerous Minnesota cities and the State itself; and
Whereas, Minneapolis was the first city in the State of Minnesota to adopt an ordinance creating a domestic-partner registry; and
Whereas, the City of Minneapolis has been steadfast in its commitment to full legal equality for same-sex couples, and in particular to an end to the exclusion of same-sex couples from marriage, as well as public and vocal proponent of the marriage equality statute passed in 2013 by the Minnesota State Legislature and signed by the Governor; and
Whereas, the Minneapolis City Council, in partnership with the Minneapolis School District, our legislative delegation and numerous advocacy organizations has long advocated for the 2014 passage of The Safe and Supportive Minnesota Schools Act, providing a clear definition of bullying, listing 19 categories of students often singled out for bullying, and creation a school climate center and council to provide up-to date anti-bullying research to school districts, and focuses on bullying prevention; and
Whereas, Minneapolis has a thriving LGBT community, sustaining and sustained by so many welcoming organizations, places of worship, businesses, neighborhoods, schools, events, and more; and
Whereas, Minneapolis has benefited from the service and talents of numerous LGBT elected officials, on the City Council, the Park & Recreation Board, the Board of Estimate and Taxation, and in both the Minnesota House and Senate, as well as of countless appointed officials and city employees; and
Whereas, Minneapolis annually plays host to the Twin Cities LGBT Pride celebration, the City’s largest outdoor festival, in which Loring Park is turned into a forum for celebrating LGBT pride and those, including allies, who work for it; 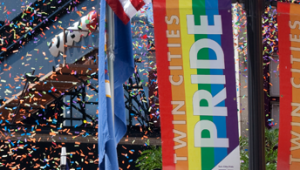